The door of the Devil

Like the best of the stars Turin can take many forms and this month she is in full Halloween mood! However, Torino is always in a spooky mood as you can read in this guests post by Mari Biella, a TurinEpi16 guest  😉 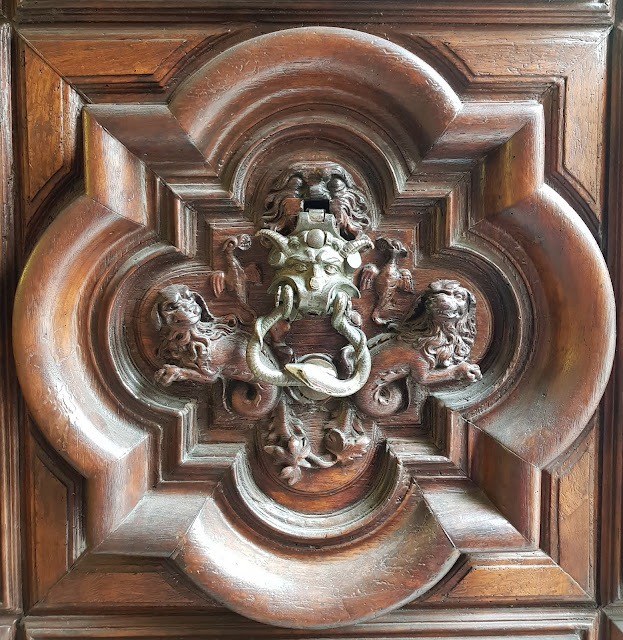 Today we are taking you to the portone del diavolo 😈or the devil's door of Palazzo Trucchi Levaldigi, in Via XX (20) Settembre, 40 downtown Turin, near Piazza San Carlo and the Porta Nuova station, behind our very own local Fifth Avenue aka Via Roma.

You can tell right away that this 1675 huge wooden door - hence portone in Italian - is rather inquietante or disturbing and even more so if you think a bank branch is hosted behind it, in that palazzo. 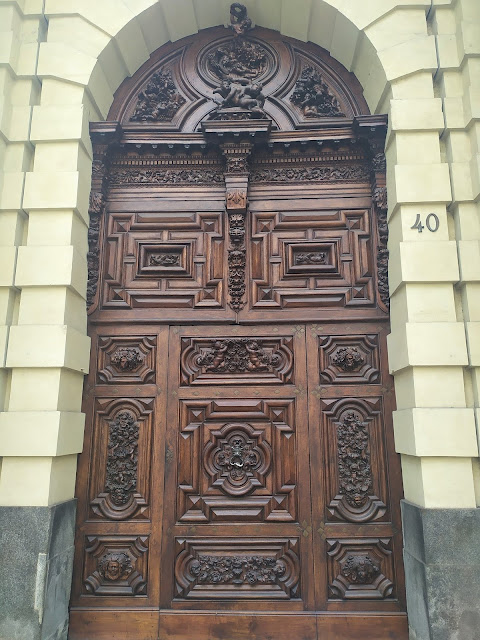 Photo by Clare Reed of Piemonte Dreams and Turinepi18 guest

Upon request of Count Giovanni Battista Trucchi di Levaldigi, the finance minister of King Carlo Emanuele II of Savoy in 1600, this door was carved in Paris following an Italian design. As you can see above in Clare Reed's picture, there are different sections and you can see many flowers, fruits and angels carved from top to bottom. Things start getting uneasy as you move your eyes from the top section to slightly above your heads, as on the lateral panels there are two heads sticking out, watching you! 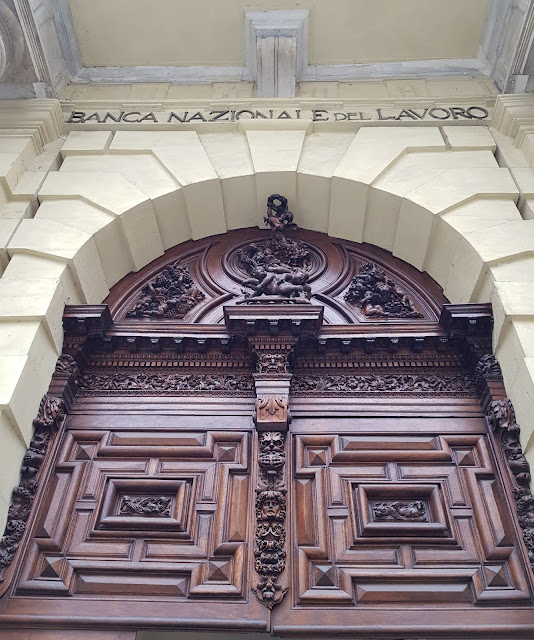 On the right there is a male head and on the left a female one, both are sticking out of th door and looking down on you or anyone else who getting inside the door 😰 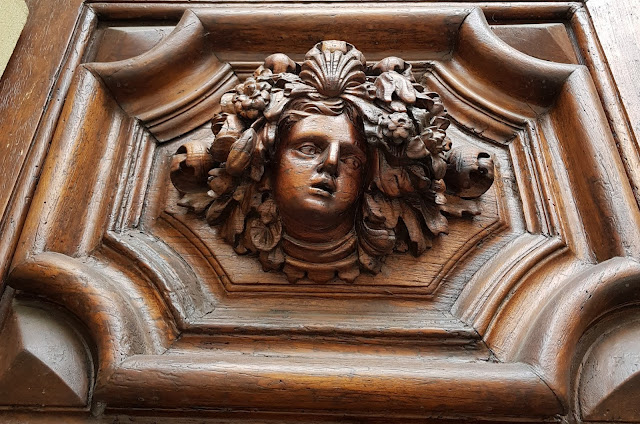 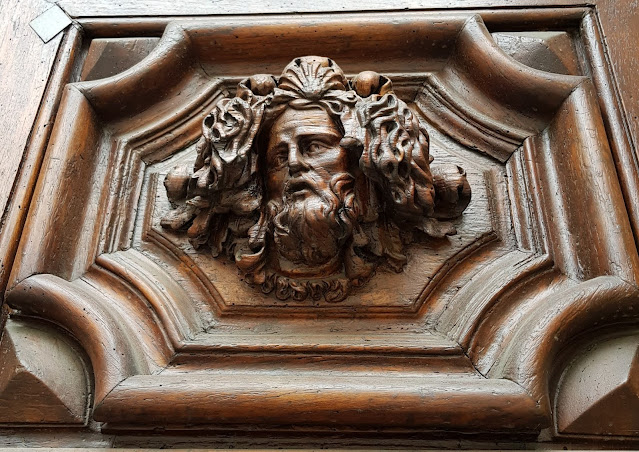 Right in the middle of the door, there the doorknob with the head of the devil 👿 en relief, is holding the metal doorknob in his mouth made of two snakes joined by their heads. This is what people have been holding their hands to for over 300 years when entering this palazzo. Naturally the face of the devil is fully detailed and staring at you 😱 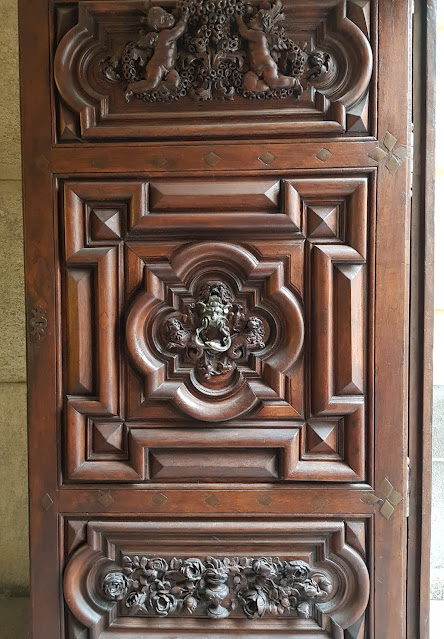 Many people wonder why there the devil is right there, on the door but in Turin we only have legends to answer these questions, like the one that says the door appeared in Turin suddenly in one single night!

Another one claims that once a wizard apprentice needed help with a spell and called in the devil who was very annoyed! So as a punishment for disturbing him, the devil trapped the apprentice behind the door for the eternity. 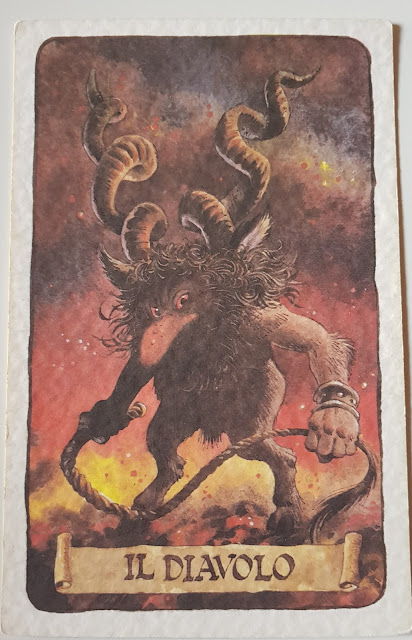 This palazzo has always had something disturbing... in fact in 1600 it hosted a tarot card factory and the devil is n.15 of the major arcanas - the cards with a bigger symbolic value and more power in a divinatory reading. Moreover, Turin is known all over Italy as the città magica or the magic city because both black and white magic have always traditionally been practiced, lots of sects are based here, and we also count the largest number of psychics and people who claim to have seen an angel in Italy! Even Mole Antonelliana had a big statue of an angel on its top up 1953 when a big storm knocked it off and you can now see it inside Mole's Museo Nazionale del Cinema.

... back in the 1600, the street number of Palazzo Trucchi Levaldigi was n.15: il diavolo! Just like the number of the tram that currently goes by Via XX Settembre 😦 Just a coincidence? 😨 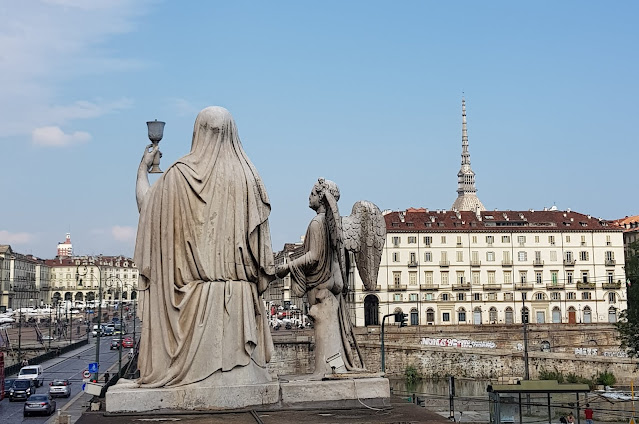 Esoterism in Turin is all over our architecture, as we explained in our Italian videoclass:

So when walking around Turin, always look up at our façades because you'll see lots of 'Monday faces', scary, in pain, with both human and animal features, near our windows and above our front doors. Our doors are real art master pieces, especially the doorknobs! You'll see this local trend both on our Palazzo Reale - royal palace - and regular historic apartment buildings. 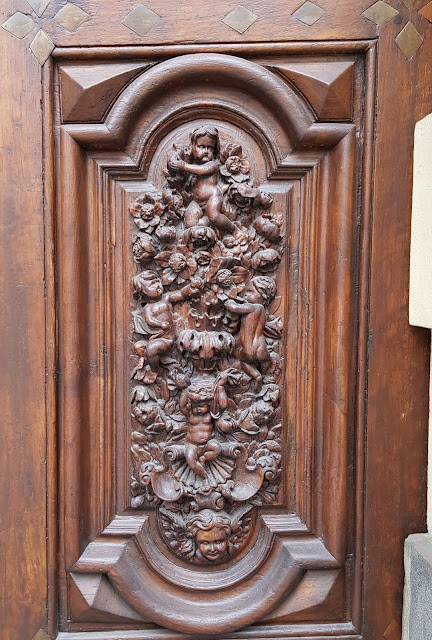 As we point out during our walking tours around Torino, anytime you see a scallop shell in our local architecture and art, you know that piece was made during the Baroque period and in Piedmont, we have our very own Baroque style 😎 quite a different vibe from what you can see in Cuba, Rome or Sicily. But this devil's door does make of Torino the ultimate Halloween destination 😜

To include a private tour, a private class or a tasting in Turin, e-mail Lucia: turinepi@gmail.com