In our BC - before covid19 - era we started a series of posts about our very own Turin's churches. Granted that Torino isn't Rome with its 1000 different beautiful churches in many different architectural styles, dating back to different periods of history, still Torino counts about 114 churches and most of them are famous places totally worth a visit! 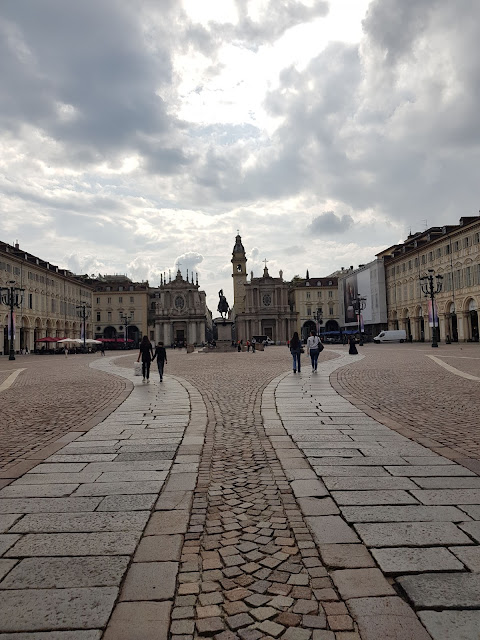 We started our series from Piazza San Carlo with one of our local twin churches: San Carlo Borromeo, and today we'll tell you about its twin church: Santa Cristina. When we talk about twin churches our minds go to Piazza del Popolo in Rome where you can find two churches side to side, just like ours here in Torino.

Our Piazza San Carlo (pictured above) was built around 1650, on the model of the French squares as you can tell by its aristocratic palazzos where the nobles lived.

The Saint of this Cristina church is Santa Cristina di Bolsena or The Great Martyr who lived between the 3rd and 4th century. Worshipped since the 6th century, the legend has it that Cristina was only 11 years old and extremely beautiful when her father, an officer of the Roman emperor Diocletian, locked her up in a tower with twelve maids. Vainly, her father tried to make her give up her Christian faith and  to achieve this result he proceded to torture her. He finally sent her to the Roman judges who endlessly tortured her while the angels soothed and healed her in her prison cell. She was sentenced to life by drowning in the Lake Bolsena near Rome: a huge rock was tied on her neck in hopes she would drown in the lake. However, the angels held the rock afloat and the waves drifted the girl to the shore. At that sight her father died of shame and despair and after many tortures, she was finally killed with two arrows. 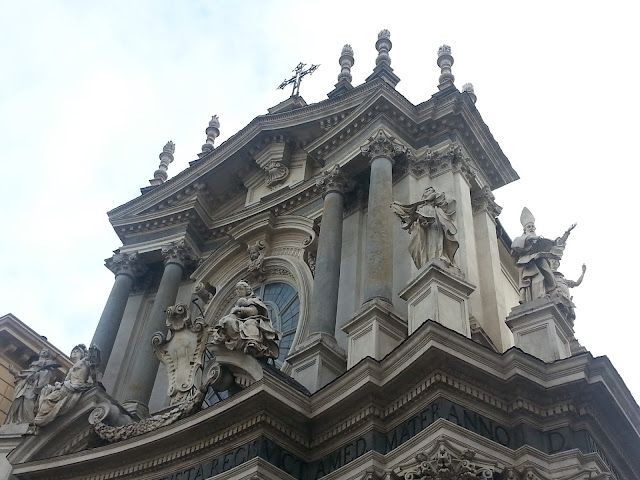 Santa Cristina is celebrated on July 24th as Roman Catholics celebrate all the Cristina, Christina,  Christine, Kristin, Kirsten and spelling variants of this name however, at least in Italy, we remember other Saints by this name and other days are dedicated to her too.

In 1639, in memory of Prince Francesco Giacinto di Savoia, her son who had died in young age, Savoy Queen Marie Christine of France bought the land where the current church stands today. However, this church was part of a major building project involving the Royal Square - now Piazza San Carlo, Borgo Nuovo - now Via Roma, and the San Carlo Borromeo church without its façade (1619). 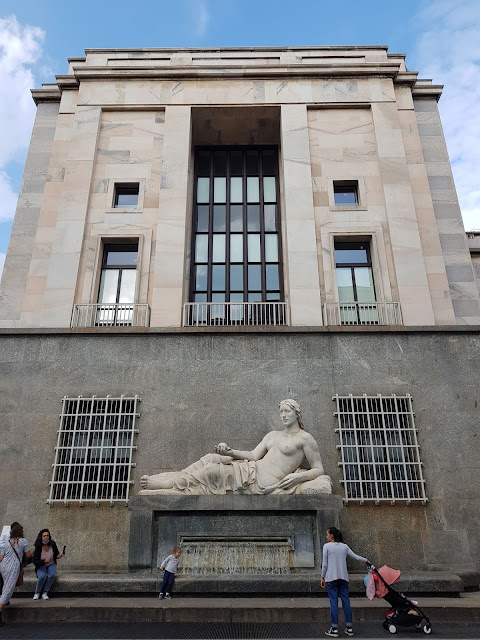 The construction started in 1639 under the direction of the royal architect Carlo di Castellamonte who died the following year when his son Amedeo took over. The fountain of the River Dora (Riparia) - one of the two rivers of Turin - was added in 1946 to the back of the church by Umberto Baglioni and Piazza CLN, the little piazza behind the twin churches was remodeled in 1937 by Marcello Piacentini. You can see how their squared 'rational' read fascist lines blend in the new enlarged Via Roma.

Queen Christine of France chose to be buried in this church in 1674 and had a convent built on the east side of this square, however, the church works got stalled in 1641 so there was no façade till 1715-1718 when the royal architect Filippo Juvarra was hired by King Victor Amadeus II of Savoy. In 1666 Giacomo Casella and his brother in law completed the vault frescos. 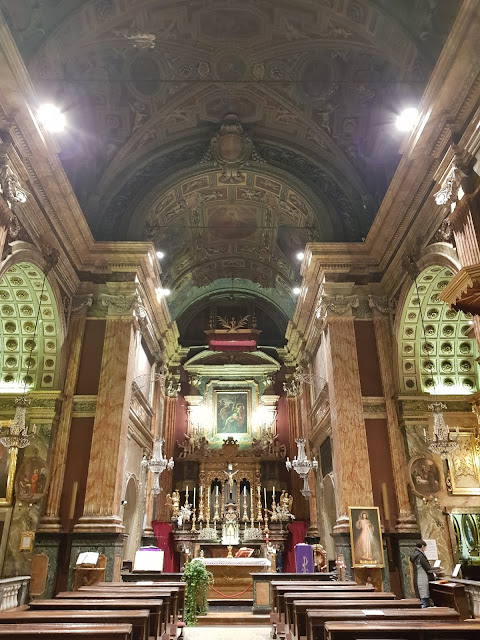 The façade was built in pure Baroque style as you can tell by the waving lines, its rich portal and oval window. On the upper part there are many columns and statues of saints and the allegories of the virtues.

Interestingly, like it happened to many historical buildings in Turin, in 1802, under the Napoleonic regime, this church was turned into the stock exchange 😮 and the next door convent was closed. King Victor Amadeus I turned it again into a church and added the marbles. During the fascist times this church got once again partially remodeled and in 1960, the altar and the side chapels were renovated.

Inside there is just one whole central nave full of Baroque decorations from the 18th century; above the entrance, there is the choir with five panels telling the story of St Michael and the ceiling is a barrel vault with stuccos representing flowers and angels. Moreover, in the ceiling there are nine representations of the martyrdom of St Christina di Bolsena. 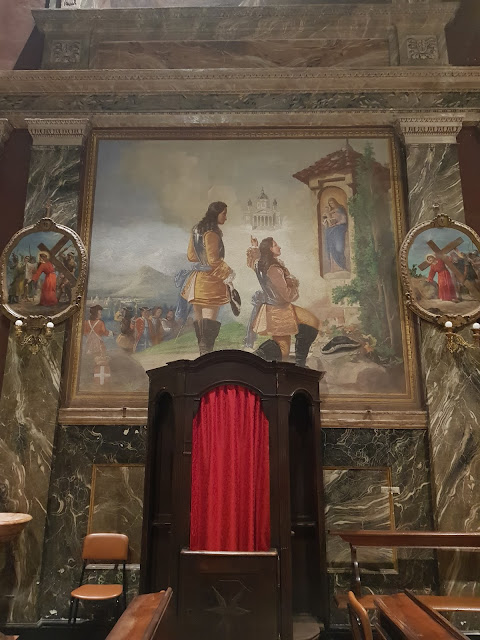 Above the presbytery there is the Savoy coat of arms and it is marked by a 1700 balustrade in marble. The altar is made of many types of marbles showing their original colors. The organ is an original piece from 1748 and above it you can admire another 18th century painting  about the martyrdom of Santa Cristina di Bolsena. 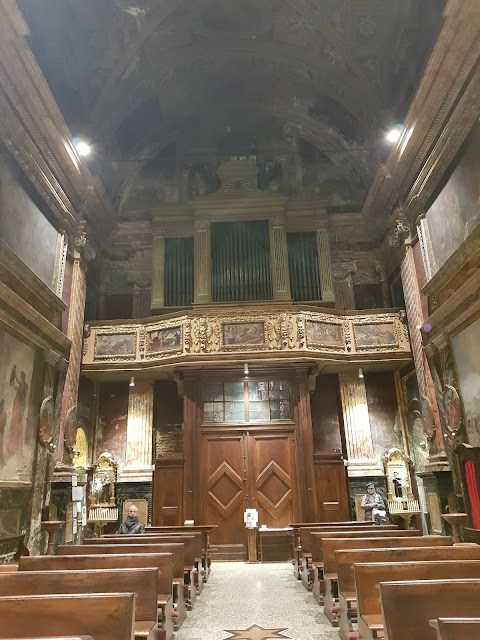 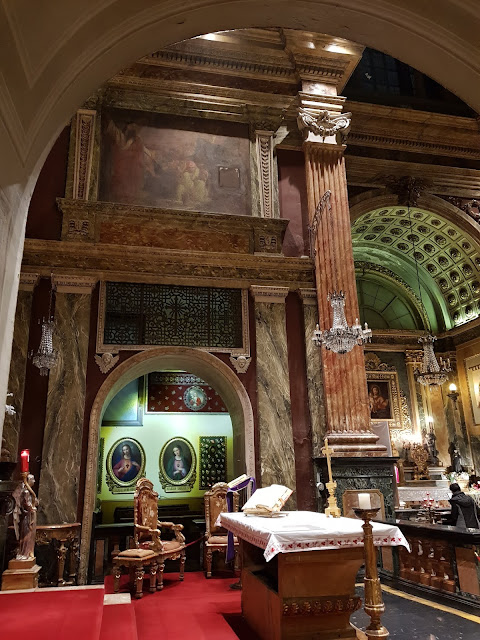 The altar on the right is dedicated to the Holy Heart of Mary with a painting of the Holy Mary of the Rosary, two reliquaries and two angels made in pewter. On the left, you can worship Santa Cristina di Bolsena. The left altar is dedicated to Saint Joseph: the altar piece shows the patronage of Saint Joseph over Turin. Here too, you can find to reliquaries and two angels in pewter. On the left you can admire a painting about the rest after the flight into Egypt, where St Joseph offers a pomegranate to Baby Jesus, sitting on the Holy Mary's lap.

The services are all in Italian and you can check the times on the door. 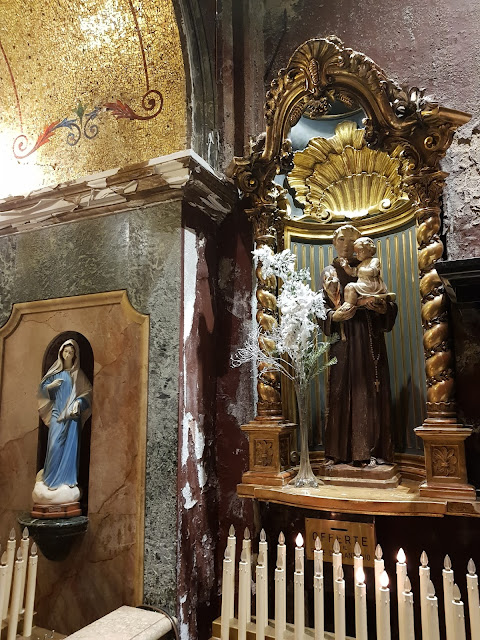 And after the service, or even just a visit to this church and its twin sister, do it like the locals do: go to one of the royal coffee shops in Piazza San Carlo and enjoy a coffee, a hot chocolate or an aperitif!

E-mail Lucia to reserve your private tours here in Turin and for your online Italian classes: turinepi@gmail.com