Many of you might be familiar with the Amaretto liqueur and the amaretti cookies, but have you ever tried our Piedmont amaretti di Mombaruzzo? 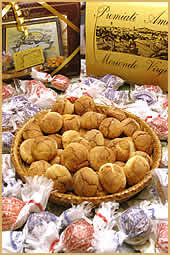 First of all Mombaruzzo is a picturesque hamlet in the Asti area and this automatically makes us think of green hills, vineyards, renaissance castles, narrow and steep lanes, brick towers and a cute little piazza. Most def it is worth a visit, especially if you bake or are a cookie lover 😉

Legend has it that at the end of the 1700, Francesco Moriondo, bursar of the royal park of La Mandria (near the Royal Palace of Venaria) fell in love with one of the royal pastry chefs, a Sicilian lady. Her specialty was a cake made with almonds.
Once they left the court duties they moved back to Mombaruzzo where Francesco was born and opened a small pastry shop where they started selling a new kind of cookie: soft and elegantly bitter thanks to the almonds.

Amaretto in Italian means a bit bitter because this is how the first fans of these cookies defined them: good and a slightly bitter.

Read more »
Posted by turinepi at 2:10 AM No comments:

the Romans in Turin

Once visitors make it over, virtually everybody falls in love with Turin, its elegant architecture and rational structure - a legacy of the Roman times. The ancient Roman military camp on whose grid the Turin's downtown developed together with the Palatine Towers are the local Roman souvenirs to remind everyone that Turin has a long history!

Read more »
Posted by turinepi at 1:53 AM No comments:

Everybody knows Gianduia as the Turin's chocolate, but what does this name mean and who is Gianduia?

As we are approaching the Mardi Gras celebrations that closes the Carnival season in Italy, we felt the need to put all the puzzle pieces together: chocolates, Brachetto wine, Mardi Gras and Commedia dell'Arte 😎

Back in the Middle Ages, before actors where professionals, there were groups of people who impersonated characters and stereotypes and acted in the Italian piazzas. As there was no script, they usually improvised and took advantage of the regional dialects to add color to their interpretations.
This is very shortly how each Italian town got to be symbolized by a theatrical character who summed up in him or her the ways of his or her city.

Certainly, back in the 1200 - 1700, politically correctness wasn't an issue and little by little shows were organized where all these 'characters' acted together amplifying their own local stereotypes. Naturally these plays were funny, they were comedies and because they reflected the core of the Italian culture - at a time when Italy was still divided into many tiny kingdoms, republics, states - this is what came to be called Commedia dell'Arte - the true Italian essence of the art of the comedy.

Read more »
Posted by turinepi at 2:05 AM No comments:

Turin is definitely renown for its many royal coffee shops, all more or less centrally located and the total lack of international coffee shop chains. This translates into a city with only indie coffee shops... yet in terms of coffee blends and brewing methods, you will find virtually only Italian style coffees: espresso, cappuccino, latte, marocchino and bicerin, caffé ristretto and corretto or lungo. 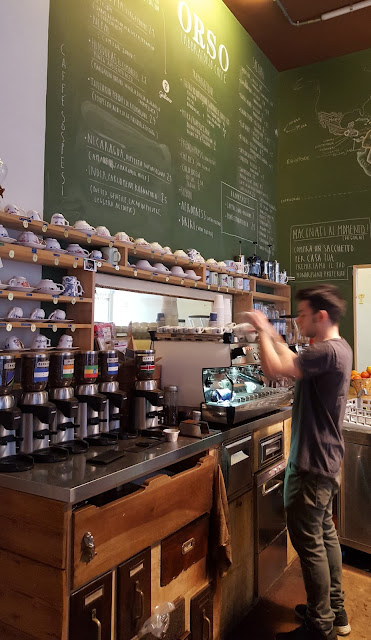