We want to start the week before our event with this celebrative post about Turin's symbol Mole Antonelliana by the British blogger The Lady Travels. The Lady Travels is an online memoir of travels by a lady (of sorts) from London, who prefers to travel alone (her partner is a very understanding and patient chap) and documents only the more humorous and bizarre aspects of her travel experiences. TLT, as she signs off as, describes herself as 'a lady of habit, a bit of a snob, amateur photographer, struggling blogger, wannabe wit and more a lover of travel rather than an authority on it'. From all her travels to date it is Italy that has enchanted her the most, and from all the cities in the country she has visited it is Turin she has fallen head over heals for, in particular for one special, symbolic building...

Having had the privilege to travel all around Italy over the past decade, it is Turin that I find to be the quintessential Italian city. It has everything a tourist would look for in an Italian city; it's as historic and cultured as Rome, more romantic than Florence, more timeless in style than Milan and certainly a lot cleaner than Naples. It is the friendliest Italian region I have been to and has local cuisine to die for (I once had the most delicious Peidmont dish of Torino noodles, home grown leeks, Bra veal and locally sourced bacon in a lovely little eatery near Porta Susa. Thoroughly recommend!).

Yet, Turin is not a destination most holidaymakers would even consider visiting when planning a trip to Italy, and I simply cannot fathom why. May be it's because Turin is historically an industrial city and potential tourists are put off by visions of ugly factory chimneys, soot-covered streets and hard-faced working locals. This couldn't be further from the truth. Turin is stunningly beautiful and I certainly found the people to be extremely warm and welcoming (more so than anywhere else in Italy). How could one not even be curious about a city that uses teddy bears on its metro network signage...

...and chooses a ‘mole’ to be its civic symbol? The Mole Antonelliana is, to plagiarise many a guidebook, the Eiffel Tower of Turin. It certainly doesn't resemble its French cousin (arguably, it is far more beautiful), but it does seem to stir up similar romantic undertones just from its presence. It wooed me with its stunning architecture, compelling me to climb every conceivable viewpoint around the city in order to capture a better photograph of it. 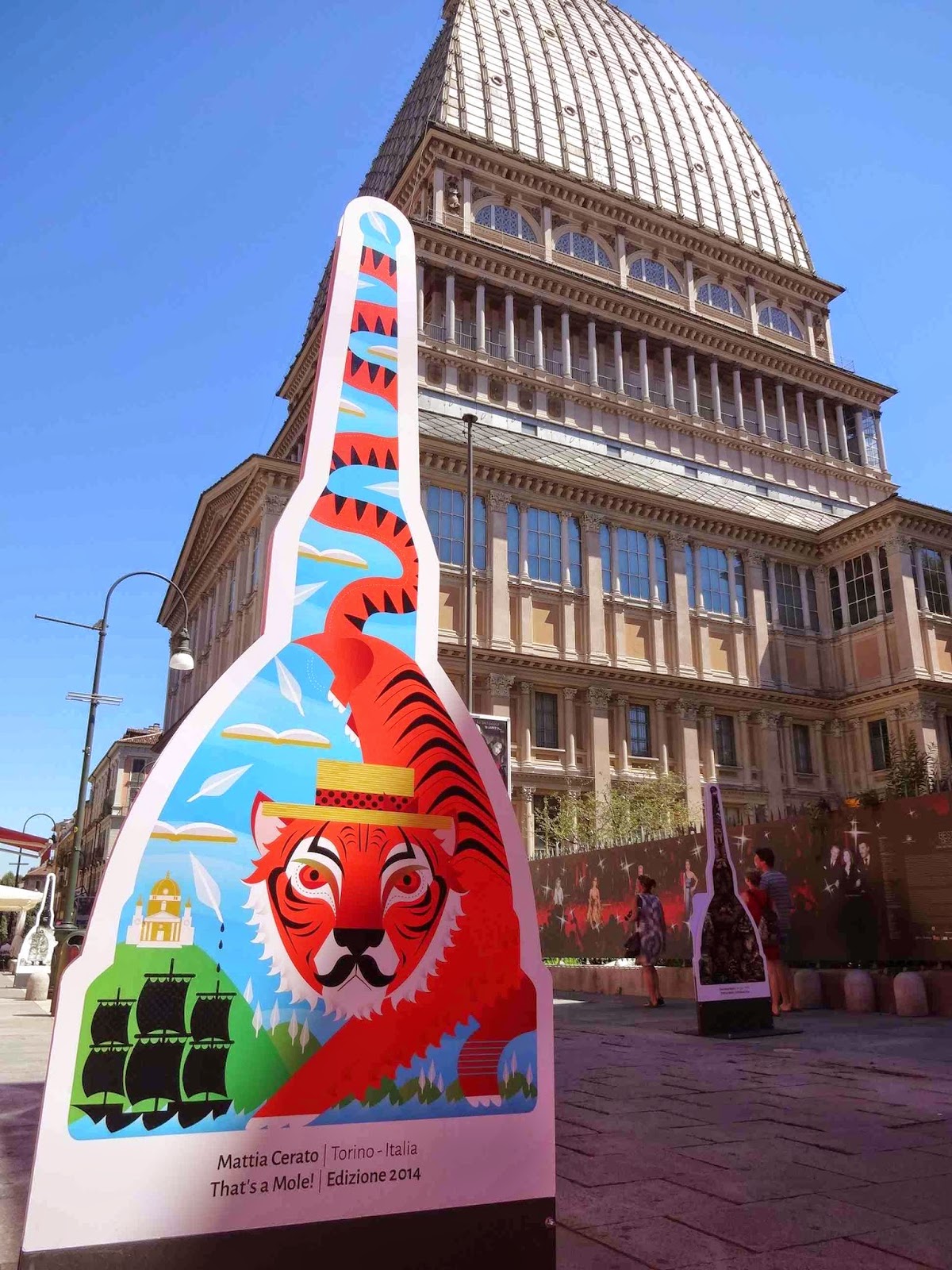 Clearly, I am not alone in holding a lot of affection for this beautiful nineteenth century building, as was evident from the entries to the first annual "That's a Mole" competition held earlier this year (2014). Entrants were asked to design a Mole silhouette and nearly two thousand entries worldwide were received. The judging panel's favourite twenty-five are presently being displayed outside the Mole (a selection below) and the overall winner was Sara Tassan Mazzocco's delightfully cute crocodile (bottom right). 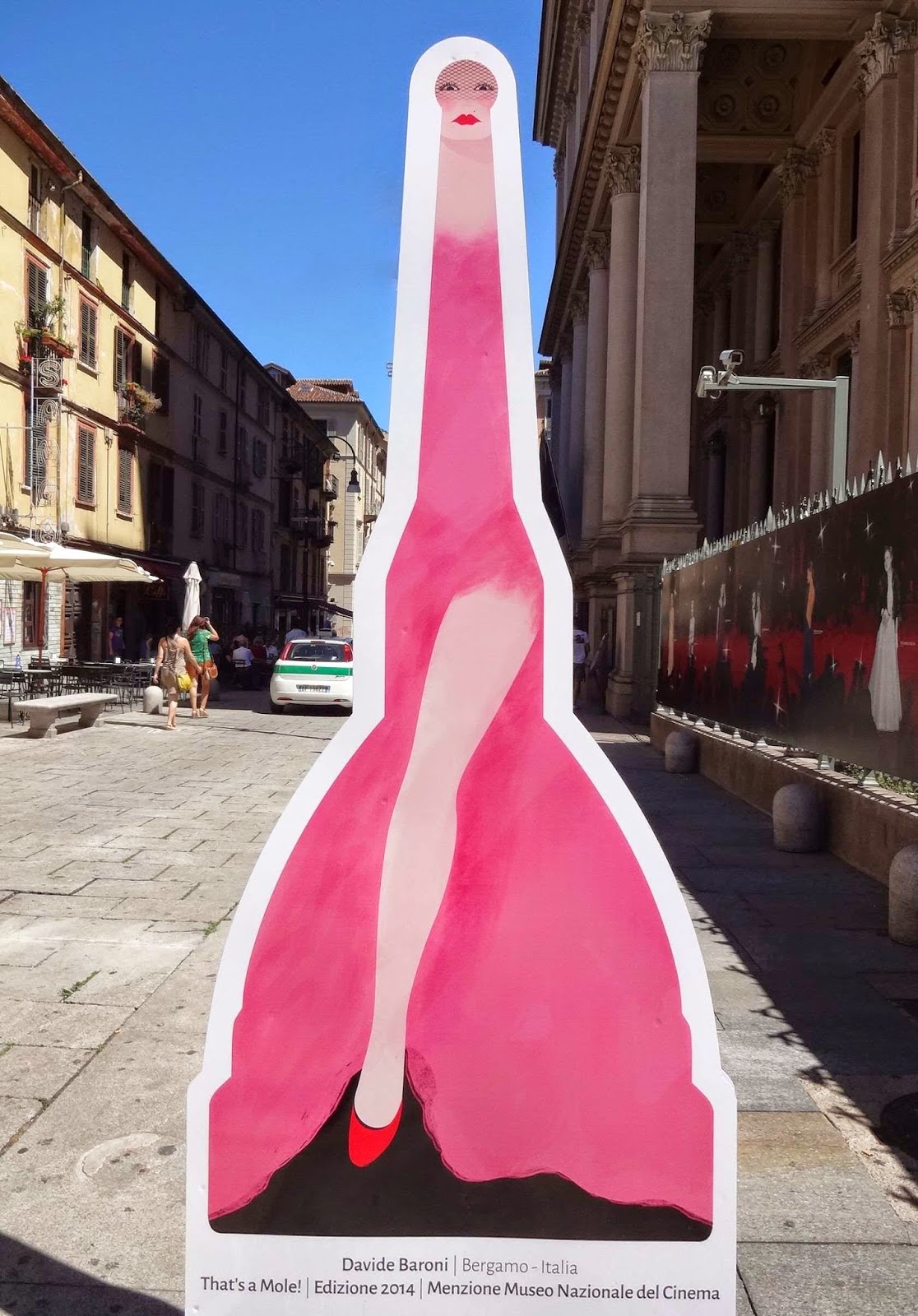 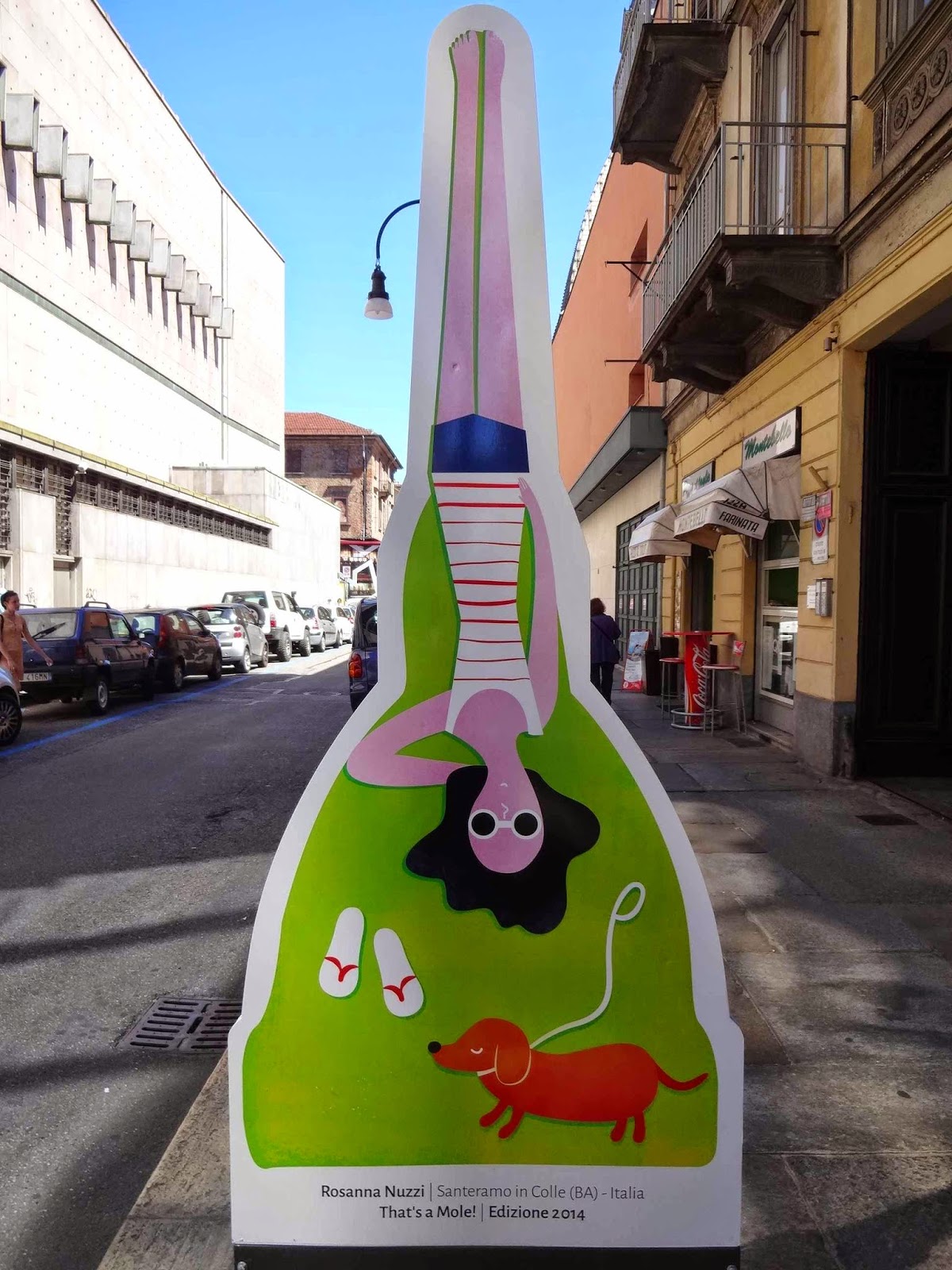 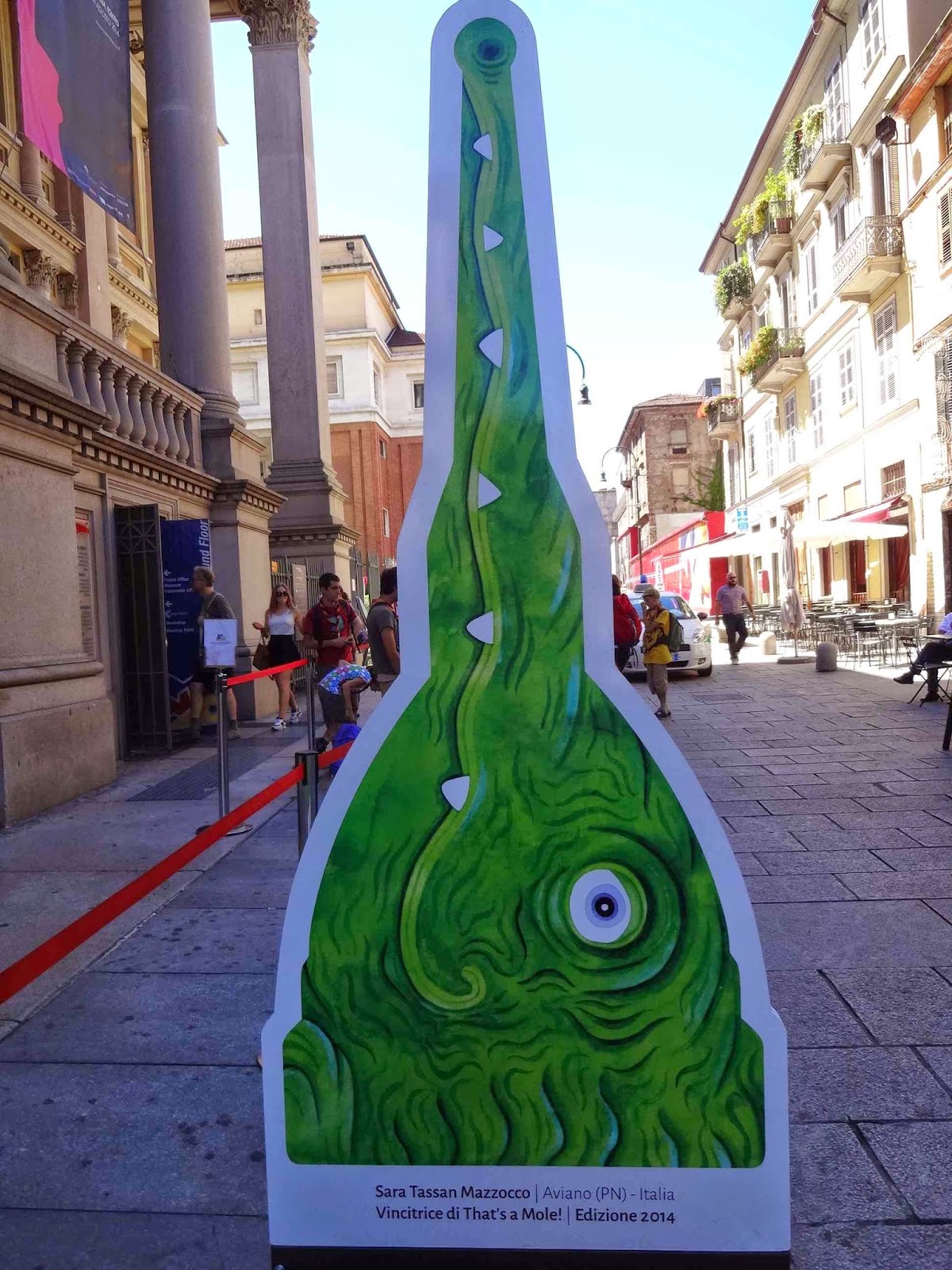 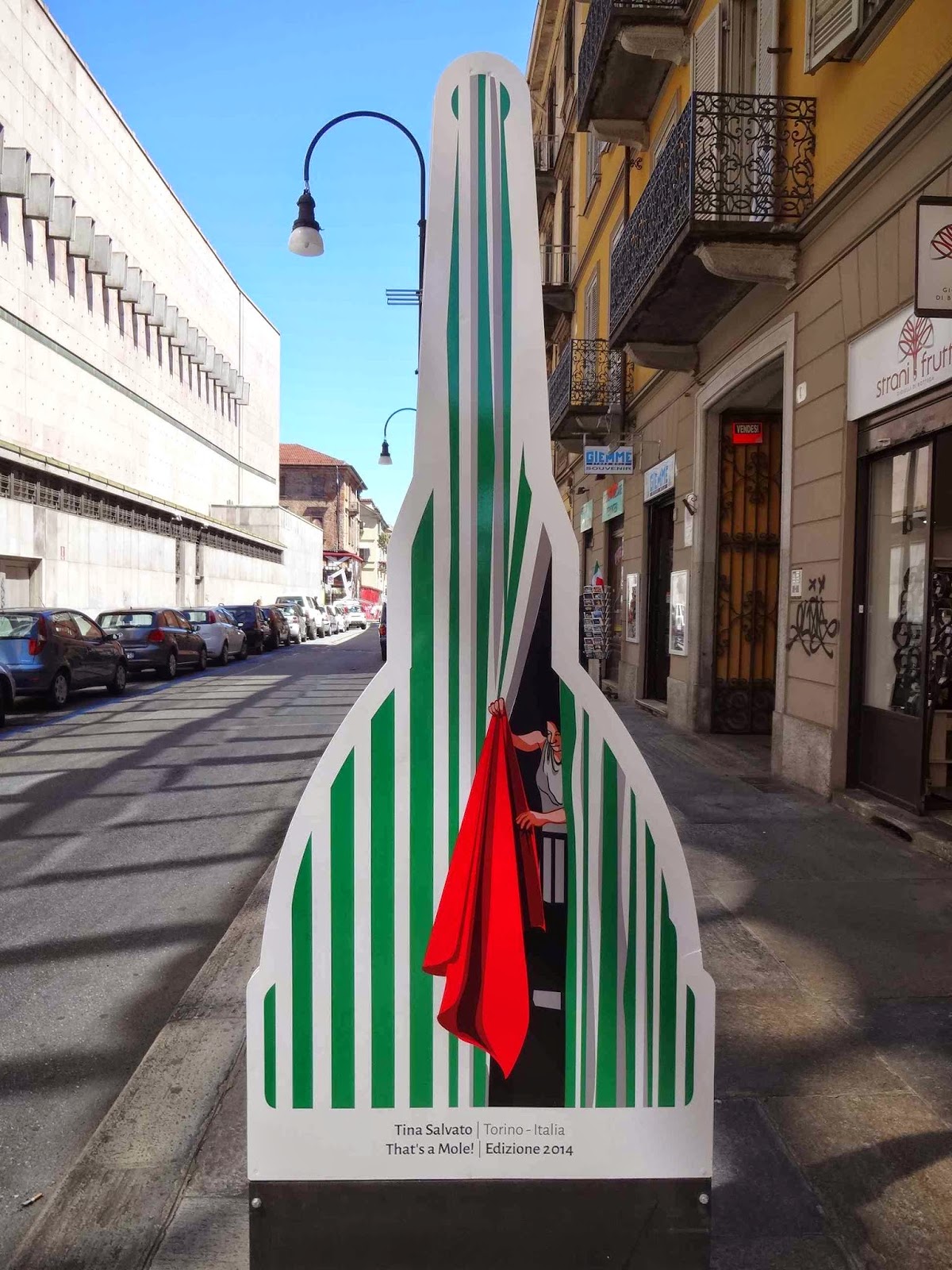 Like every typical tourist, if symbolic buildings are open to the public then I will certainly poke my nose around them, and if they can be ascended as well then I will climb them too. I don't mind if I have to walk up endless staircases or endure vomit-inducing lifts to reach the top. The journey up is merely part of the experience. I like to think of myself as the adventurous type, so the more unique a challenge appears to be the more determined I am to accomplish it. However, I didn't expect any challenge would be involved when ascending the Mole. On my first visit to it nearly ten years ago, I had read that a lift was the main method of ascent. What would be so challenging about taking a lift? Well, that's what I thought until I chose to visit the National Museum of Cinema beforehand.

The Museo Nationale del Cinema has been housed at the Mole since 2000 and is a fascinating celebration of the art form. Although understandably, there is a bias towards Italian cinema and Italy's presence in cinema (yet strangely, any celebration of Turin's role in the 1969 comedy caper The Italian Job is glaringly absent), Hollywood's influence is certainly the main emphasis at this museum. From the birth of cinema through to the latest Oscar winners, interactive displays and authentic artefacts from sets and stars adorn five levels of the Mole Antonelliana.


Yet, although there is so much to see and do in the museum, even a pair of shoes and a lace bustier worn by Marilyn Monroe could not quite take one's full attention away from the real attraction in the Mole's grand Temple Hall.


The lack of a shaft and only the presence of a few cables pulling and lowering a small glass box up and down the 85 metres height of the Temple Hall can be disconcerting to say the least. So, it would be interesting to find out how many first-time visitors to the Mole changed their mind and chose not to venture up to the top of it once they had seen that lift in action. Did anyone wish they had taken the lift first on their visit to the Mole, or skipped the museum altogether to avoid actually seeing the lift in transit? Take my word for it, the lift is completely safe and secure, moves quickly but very smoothly, and is a chance albeit fleeting, to see the stunning craftsmanship of the ceiling and cupola close-up. To miss out on the museum in order to travel to the top of the Mole in ignorance would be to miss out on a huge part of the Mole experience. Yet, to skip the lift altogether would mean missing out on arguably the best panoramic views of Turin.


As is the case with being at the top of any symbolic city building and taking in the spectacular views, one cannot actually see (nor take the prized photo of) that symbolic city building against those spectacular views. So, I decided to catch the number 15 bus from Piazza Castello to the suburb town of Sassi (a twenty minute ride to the end of the line). From there, I boarded a funicular oozing with old time charm that carried me up the hill of Superga to the beautiful baroque basilica at the top of it.

A short walk from Superga station reveals a beautiful baroque monument to the Virgin Mary... 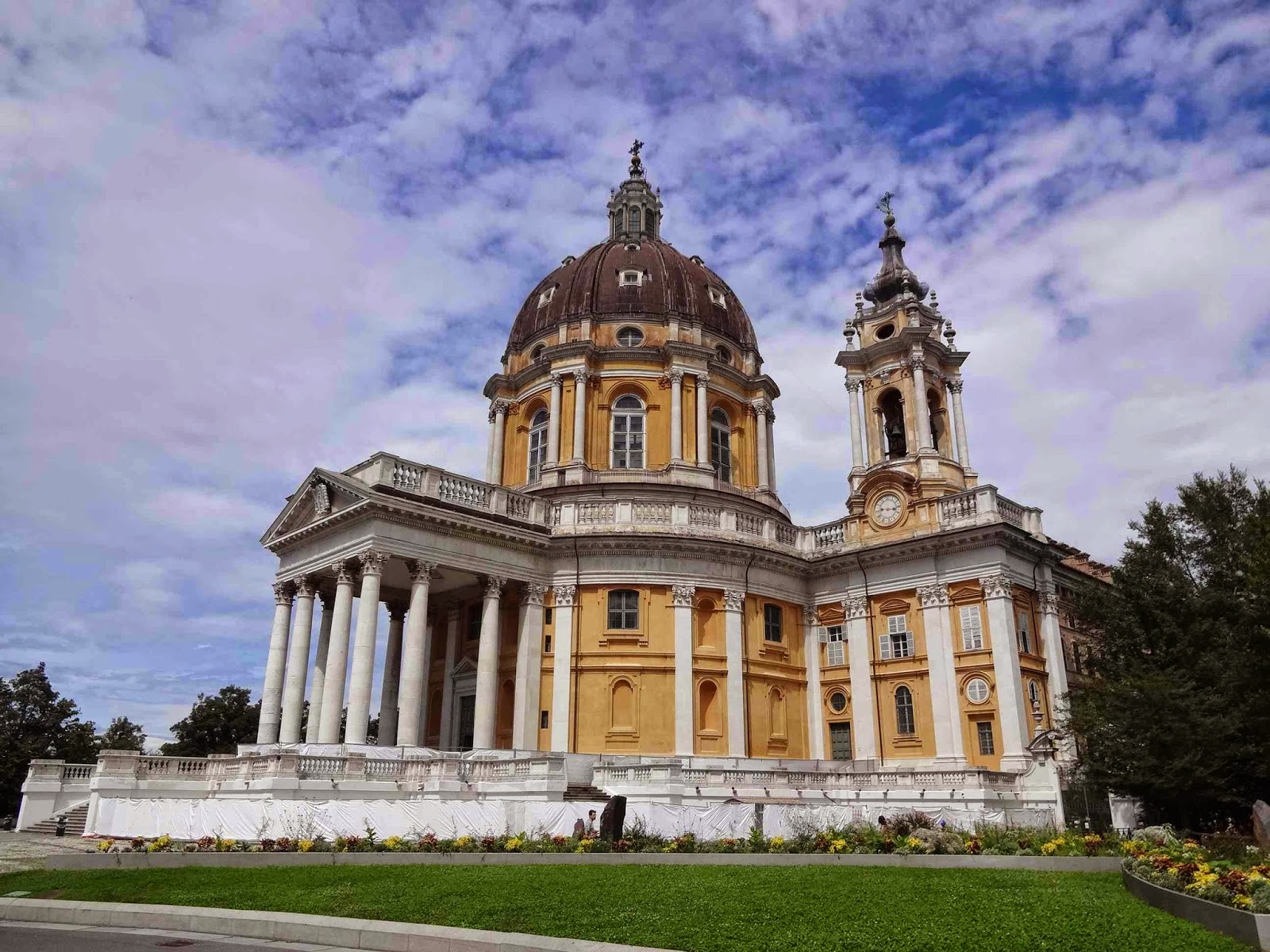 ...where the interior is as beautiful as the exterior.... 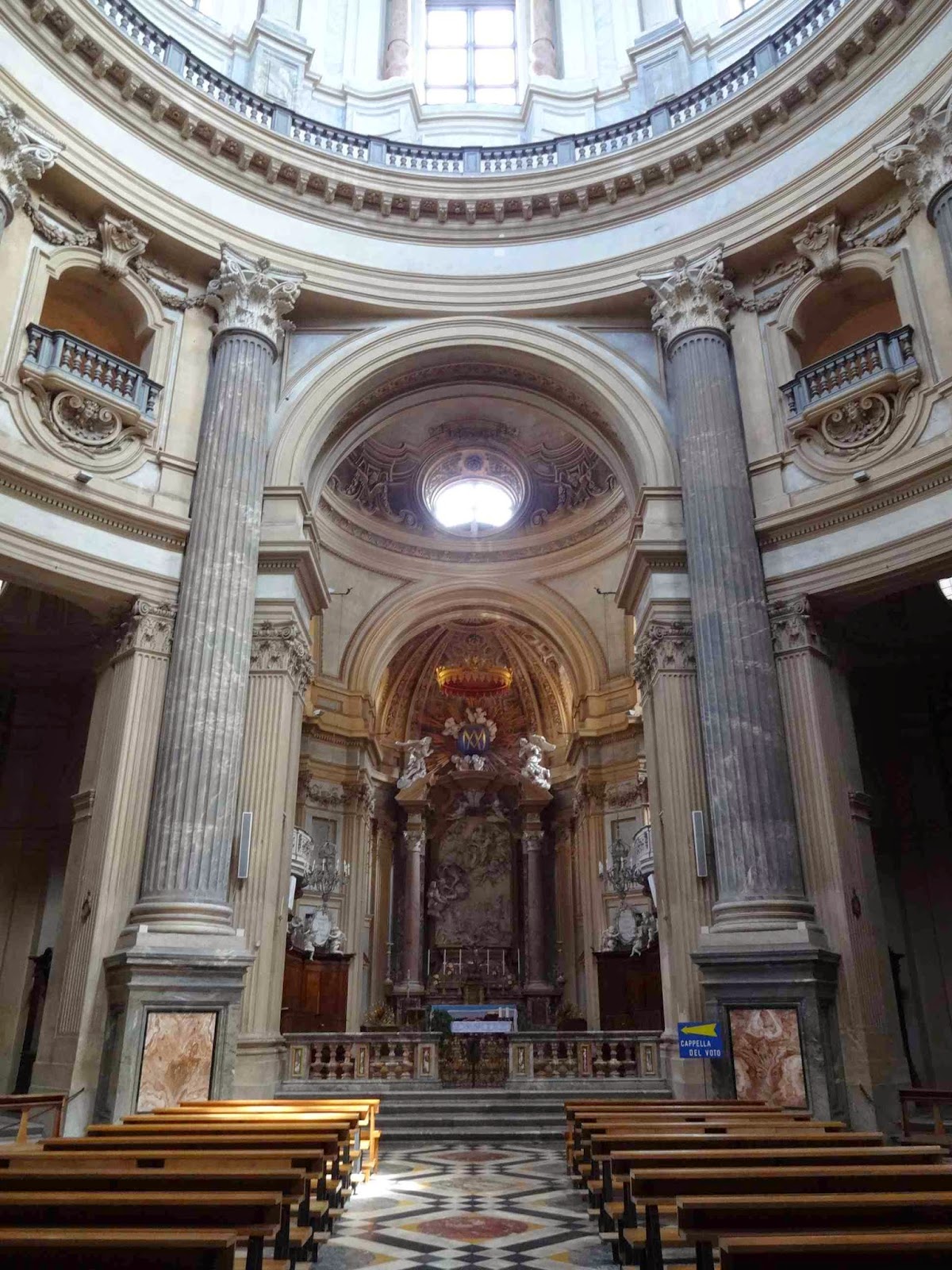 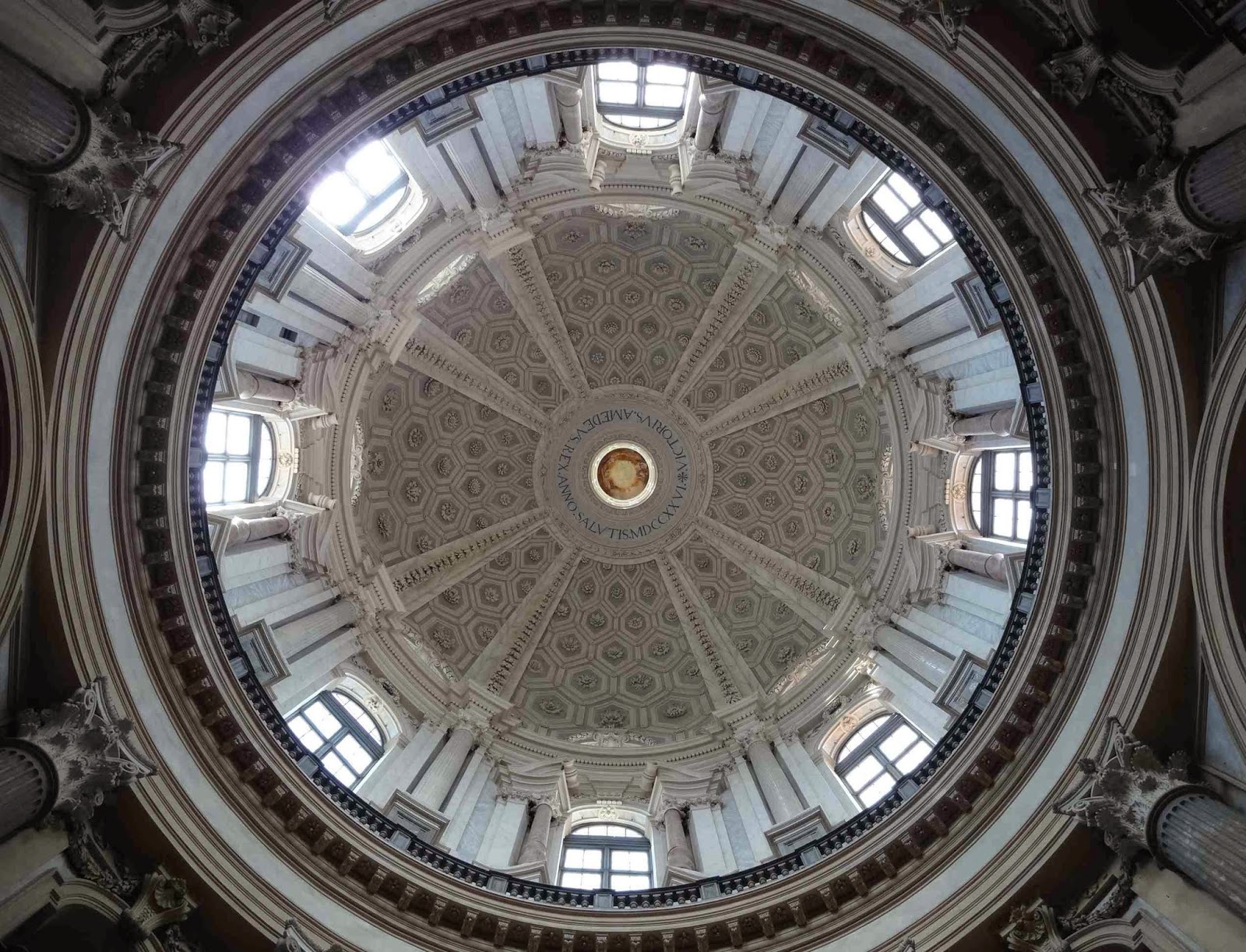 ...almost distracting me from the main reason why I came up here in the first place.... 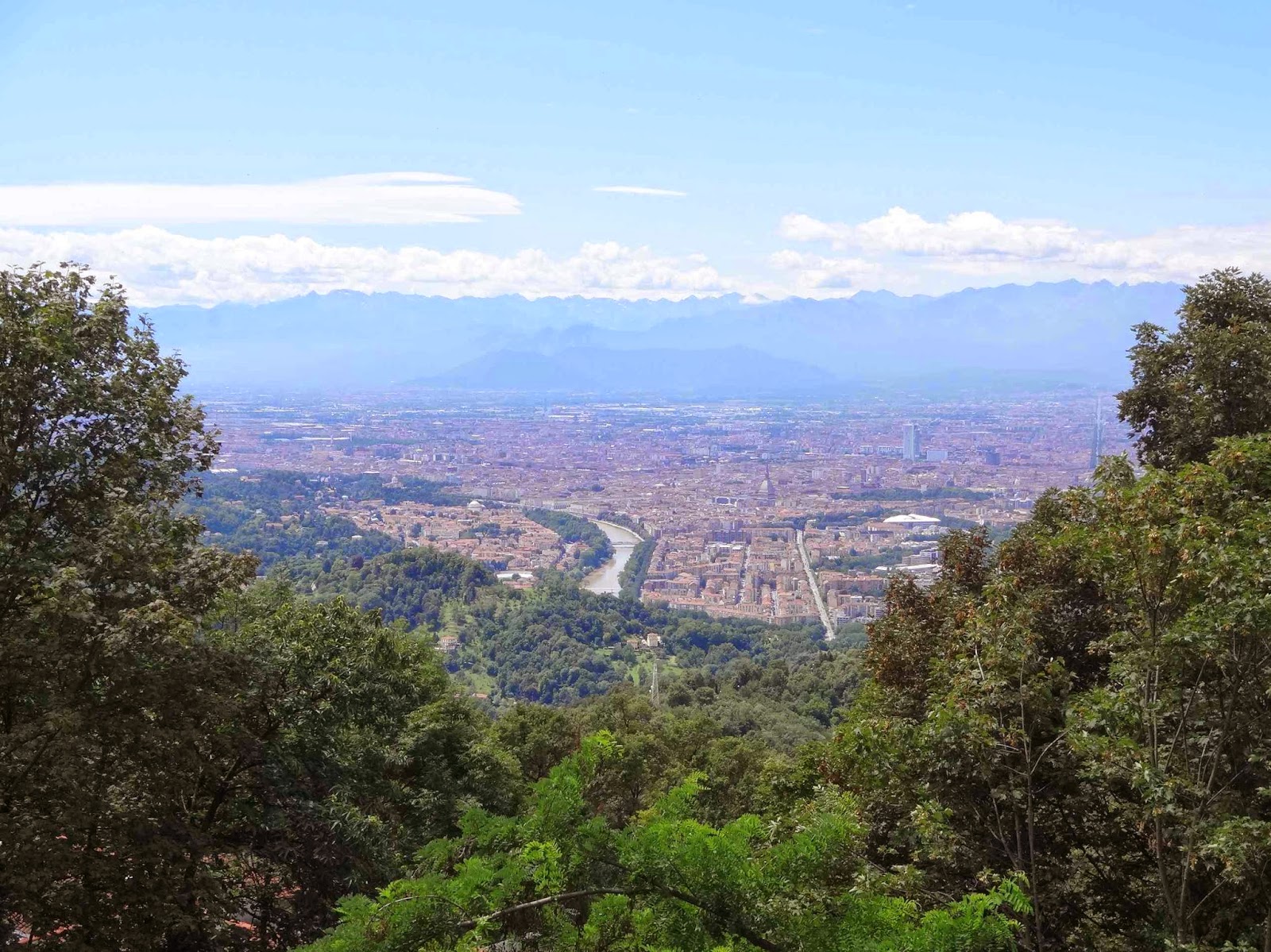 Turin is an enchanting city, a hidden gem in stunning country. Its romance, warmth, beauty and sincere charm are the reasons why I return to it again and again. To miss Turin out from any tour of Italy is in my opinion to miss out on the great Italian experience.

By
The Lady Travel