Enjoy this very interesting guest post by Mari Biella, an author and blogger. She has been writing from an early age, and her mother still has some highly embarrassing poems and stories to prove it. Her published works are The Quickening a psychological ghost story set in the Victorian Age, and Loving Imogen a collection consisting of a novella and three short stories. A free short story, The Song of the Sea, may be downloaded from her website.

Mari was born and raised in Britain, but currently lives in Northern Italy. She’ll read just about anything she can get her hands on, but particularly enjoys literary fiction, psychological horror, and crime fiction. In her free time she enjoys travelling and exploring Europe’s lesser-known corners. 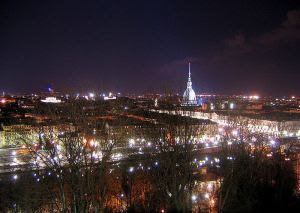 Turin. Say the name, and most people straightaway think of the famous Shroud. Others think of Fiat. Still others think of Gianduia chocolate, or the city’s elegant Parisian-style boulevards. As I discovered during a long weekend there, however, there is far more to this city than these iconic images alone account for.

The surrealist painter, Giorgio de Chirico, described Turin as:
‘the most profound, most enigmatic, most disquieting city not only of Italy, but of the world.’

De Chirico was only one of the many cultural and artistic figures who have made Turin their home. Notable inhabitants also include such diverse personages as Nostradamus, Erasmus, Rousseau, Nietzsche, Primo Levi and Umberto Eco. Why does Turin attract so many distinguished residents?
On one level, of course, the attraction may simply be aesthetic. Turin is a beautiful city, often regarded as the Italian Paris. This, however, is only part of the story. How many other cities are said to form a corner of not one but two global magical triangles? How many other cities can boast not only one of Christianity’s most famous relics, but also the legendary entrance to the Underworld?

Welcome to Turin.
The entrance to the Underworld is said to be located in Piazza Statuto, to the west of the city centre. According to the Romans, who have also left their mark on Turin, the west, being where the sun set, was also where the darkness began: a place of negative associations. According to popular legend, Piazza Statuto is one of the vertices of the Black Magic triangle (the others being in London and San Francisco).
Though I can’t say that I personally was overcome by a sense of brooding malevolence in the Piazza, even the most hardheaded visitor might be forgiven for shuddering upon catching sight of the Frejus Fountain, which dominates the square. 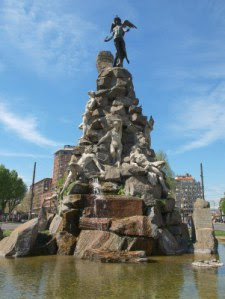 Officially this monument commemorates the inauguration of the Frejus tunnel between Italy and France. The white figures around the base are Titans; the winged genius at the apex symbolises reason. The meaning is clear: the forces of science and reason can make light work of that which defeats brute force alone.
But is that the real meaning?

Take a closer look at that winged genius: 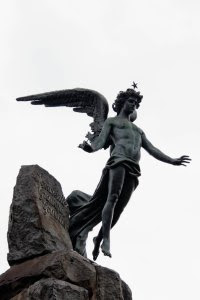 Hmm … an angelic being crowned with an inverted pentagram? Could this figure actually represent something altogether less benign?
Turin is in fact replete with occult and masonic imagery, to such an extent that I couldn’t possibly hope to cover it all here. Another notable example, though, can be seen in Via Vittorio Alfieri, where a building stands which was once home to the Royal Factory of the Tarot, no less. One of the doors is decorated with fruit, flowers, angels and, er, this creature: 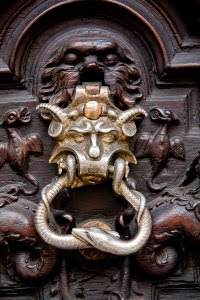 This is known locally as ‘the Devil’s Door’. Apparently the figure of the Devil in the tarot pack once manufactured within was based quite closely on this clapper.
Turin is also said to form a point on the White Magic triangle, the other points being Lyon and Prague. In Piazza del Palazzo, the sacred and diabolical sections of the city meet – the Holy Shroud, sadly on public display but rarely these days, is housed in the nearby Duomo. The invisible line between the two sections of the city is guarded by two figures on horseback, who represent the mythological twins Castor and Pollux. However, even here nothing is perhaps quite what it seems. Take a close look at the figure of Pollux: 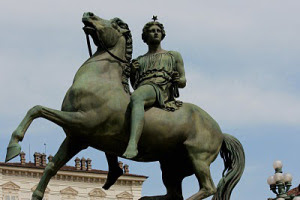 Oh dear, another inverted pentagram. Significant? Who knows.
In Turin, even the churches can’t necessarily be taken at face value. One of the most famous churches is the Chiesa della Gran Madre di Dio, or Great Mother of God, a Neoclassical building which dominates the banks of the River Po. Architecturally, it seems less like a Christian church than a pagan temple. 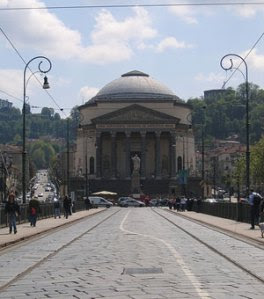 According to yet another of Turin’s many legends, a temple to the goddess Isis once stood on the site of the present church, and the name – Great Mother of God – refers to her. There are also two statues on either side of the church steps, representing Religion and Faith. The figure of Faith is holding a chalice – a reference to the Holy Grail, which according to yet another local legend is buried nearby.
I could tap out thousands of words and still not even scratch the surface of the beautiful, mysterious, paradoxical place that is Turin. Suffice it to say that Turin is well worth a visit or, if you’ve already been, a revisit.
In fact, from a writer’s point of view, it may be worth a fictional revisit. Watch this space…