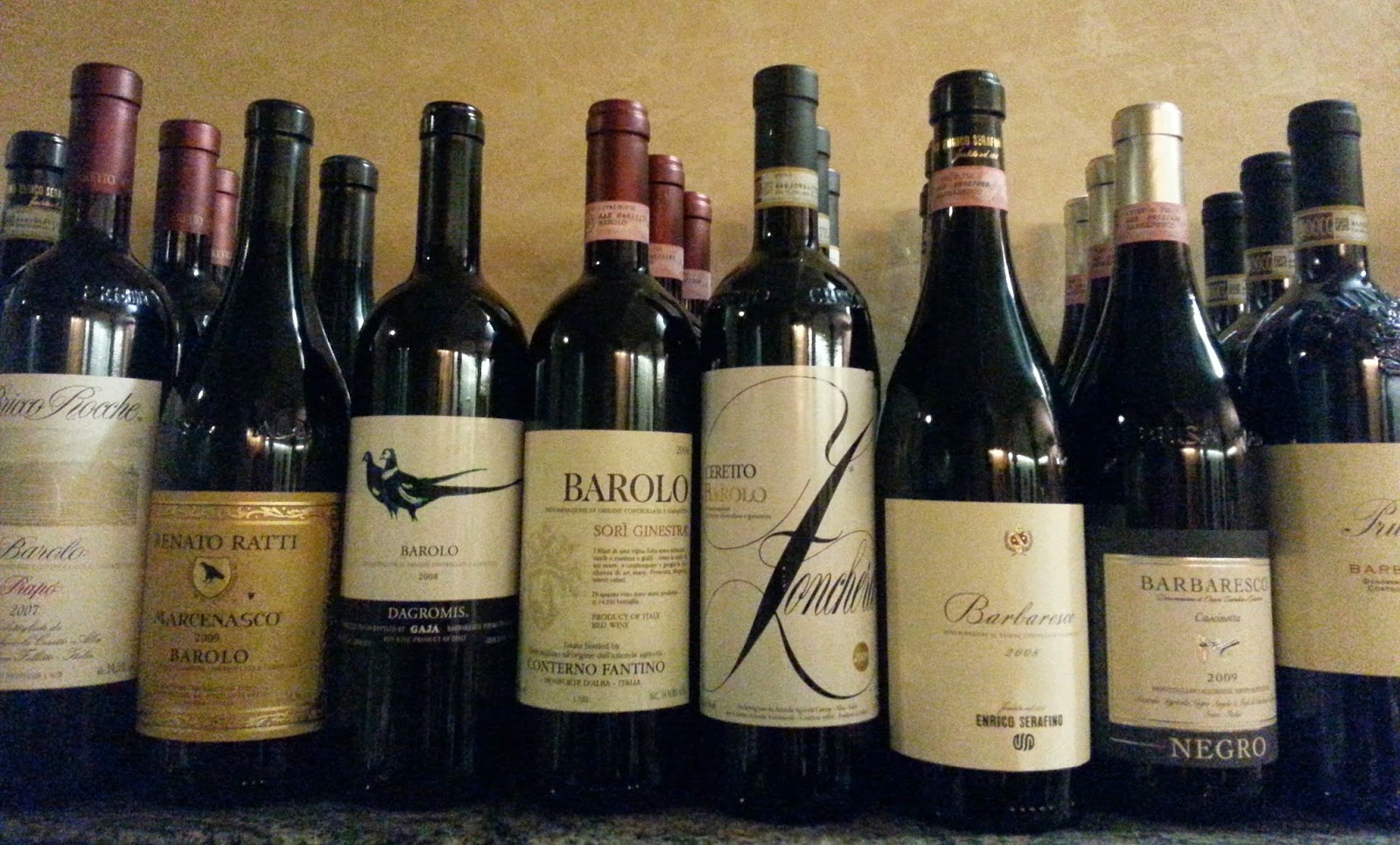 Barolo the wine of the kings & king of wines!

Barolo wine takes its name from Barolo, a little town in the Cuneo provice, where it is produced. Barolo, the town and its surrounding are a real treasure chest with a breath-taking landscape, many culinary events, the wine museum and the picturesque corkscrew museum.

Barolo is produced entirely of Nebbiolo grapes cultivated only in 11 communes on the Langhe hills, in Piedmont among scenic castles and medieval villages. Prior to mid-1800s, it used to be a sweet wine but thanks to Camillo Benso di Cavour, the very first Italian Prime Minister and Giulia Colbert Falletti, the last Marquise of Barolo, Barolo in its current form began to be produced, in the mid 19th century.This rich and harmonious wine became the Savoy Family's best ambassador, representing Piedmont in all royal courts of Europe. Its rich bouquet is full and enveloping, it can develop over time without losing any of its organoleptic characteristics and this is why the 19th century nobility
called it King of wines and wine of kings.

Its color is a full and intense garnet red and its scents are both fruity and spicy. You can feel red berries, cherries in liqueur and jam both in your nose and in your mouth, together with roses, faded violets, cinnamon, pepper, nutmeg, vanilla and, at times, licorice, cocoa, tobacco and leather. Here are some facts: - it received the DOCG status in 1980,
- tar and roses scents are common in all the variants of Barolo despite the areas where they are cultivated,
- color: bright ruby which fades to garnet over time,
- elevated acidity and alcohol
- firm tannins
- made with Nebbiolo grapes
- to be named Barolo it has to age for at least 38 months, 18 of them spent in barrels
- to become "riserva" Barolo must age 62 months and in this variant hints of truffles, earth and dark chocolate show its complexity
- some Barolo producers nowadays age their wine in small French oak barriques (instead of the traditional big wooden casks)

Following the Burgundy model, since the late 19th century, the vineyards producing higher quality and pricier Barolo have been separated and sell their bottles with the CRU label.
Another variant you will appreciate is Barolo CHINATO, an after dinner digestive liqueur. It is made by steeping the cinchona tree bark from South America into Barolo and then adding other ingredients as: cinnamon, coriander, iris flowers, mint and vanilla. Each producer has its own personal recipe for this aromatic and smooth beverage.

As Barolo is a big, powerful, tannic wine, it needs to be matched with foods of similar body like the Piedmontese traditional specialties: meat dishes, pastas with rich sauces and creamy risottos. With such dishes, the tannins bind to the proteins and come across as softer.

Brasato al Barolo is one of the staple dishes of the Piedmontese cuisine: it's local beef both marinated (overnight) and braised in Barolo wine! These are the pictures of our homemade red wine brasato: 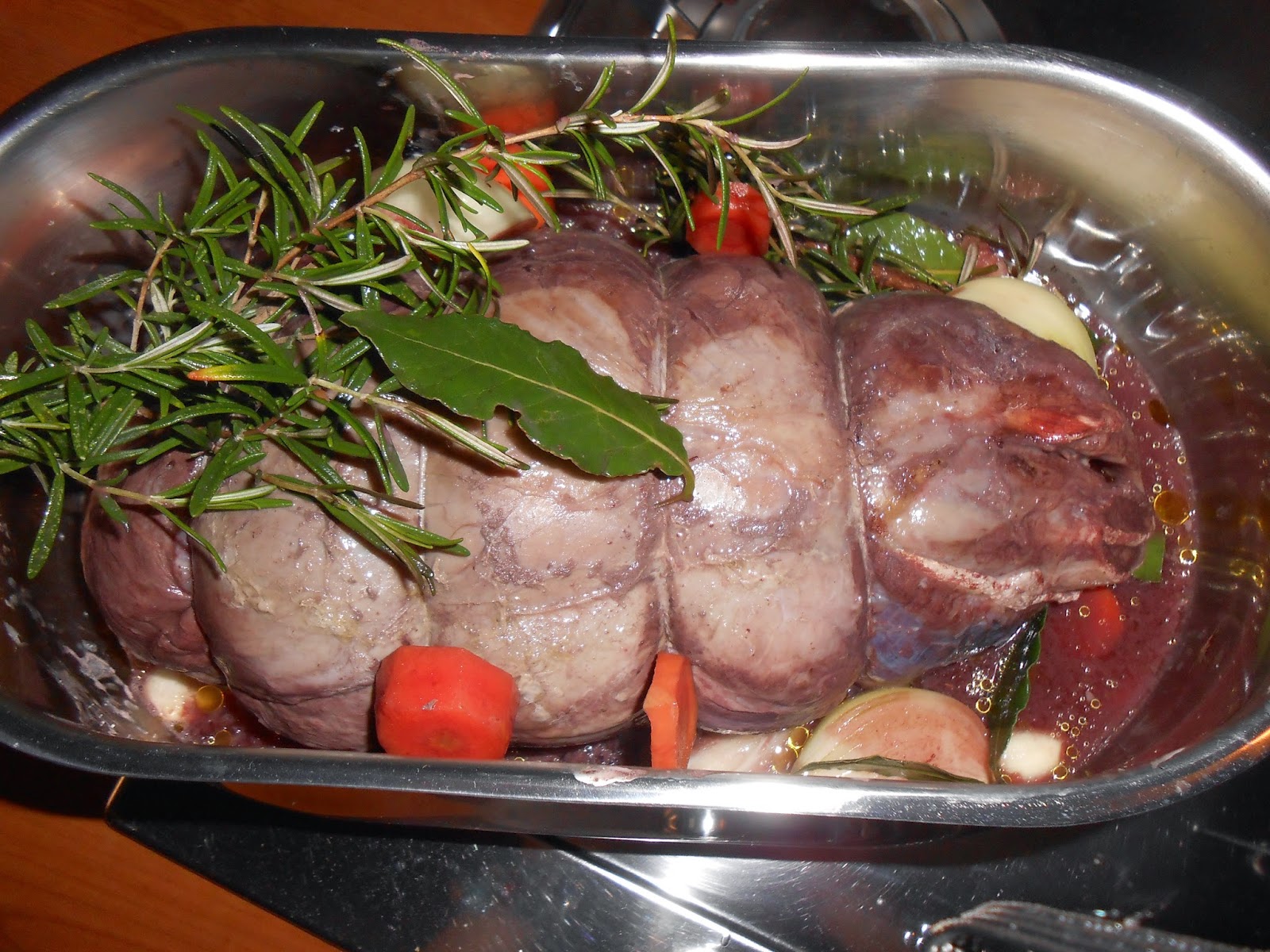 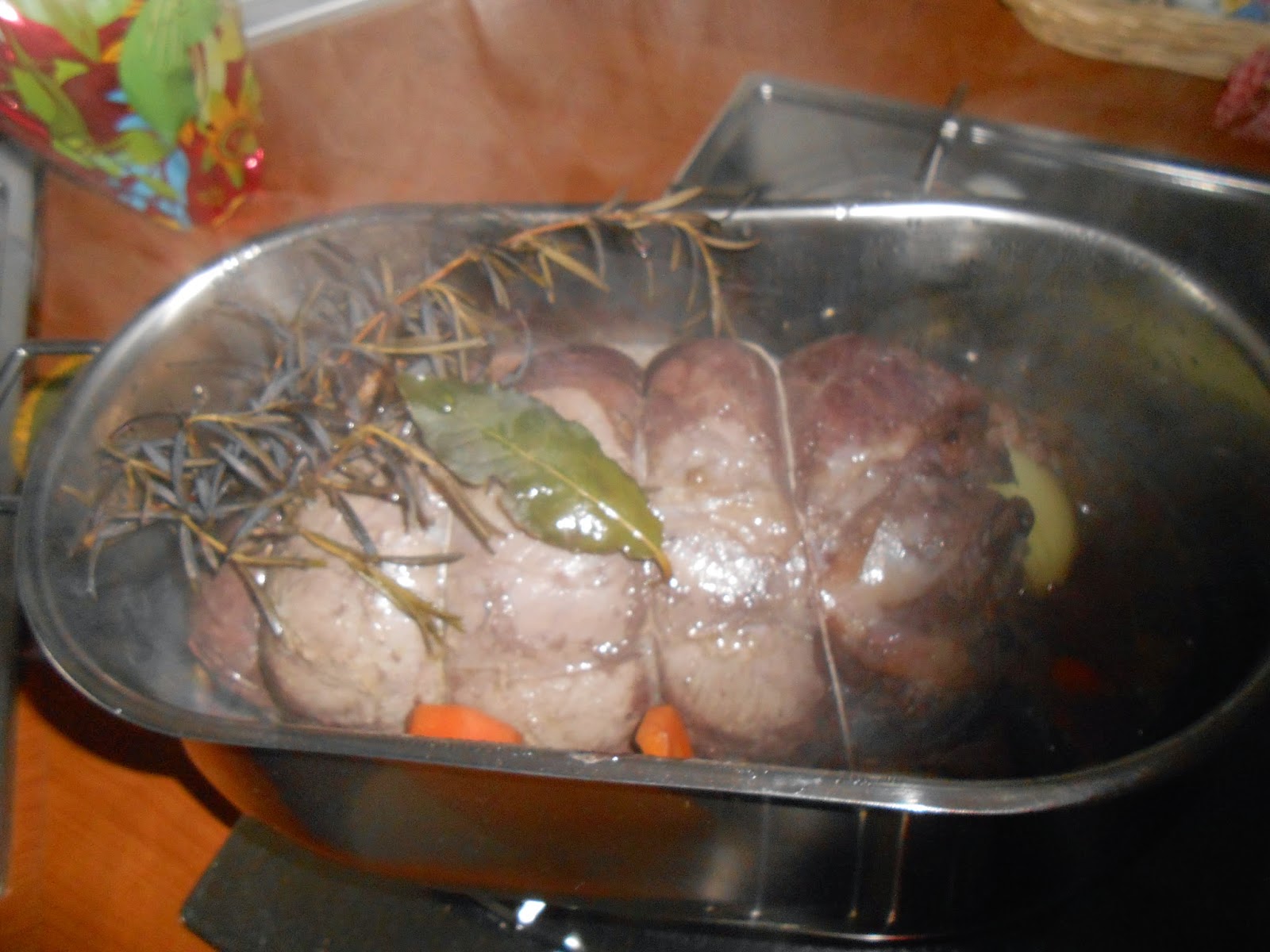 we got about 1lb or 1/2kg of rump roast and we marinated in red wine with a carrot, celery, onion, rosemary, a couple of bay leaves and sage for the whole night. Then we dried it and placed it in the roasting pan where it cooked for a couple hours.
Before cutting it, we hand-blended the vegetables of the marinade with red wine. We decreased the sauce, cut our slices and savor it!! 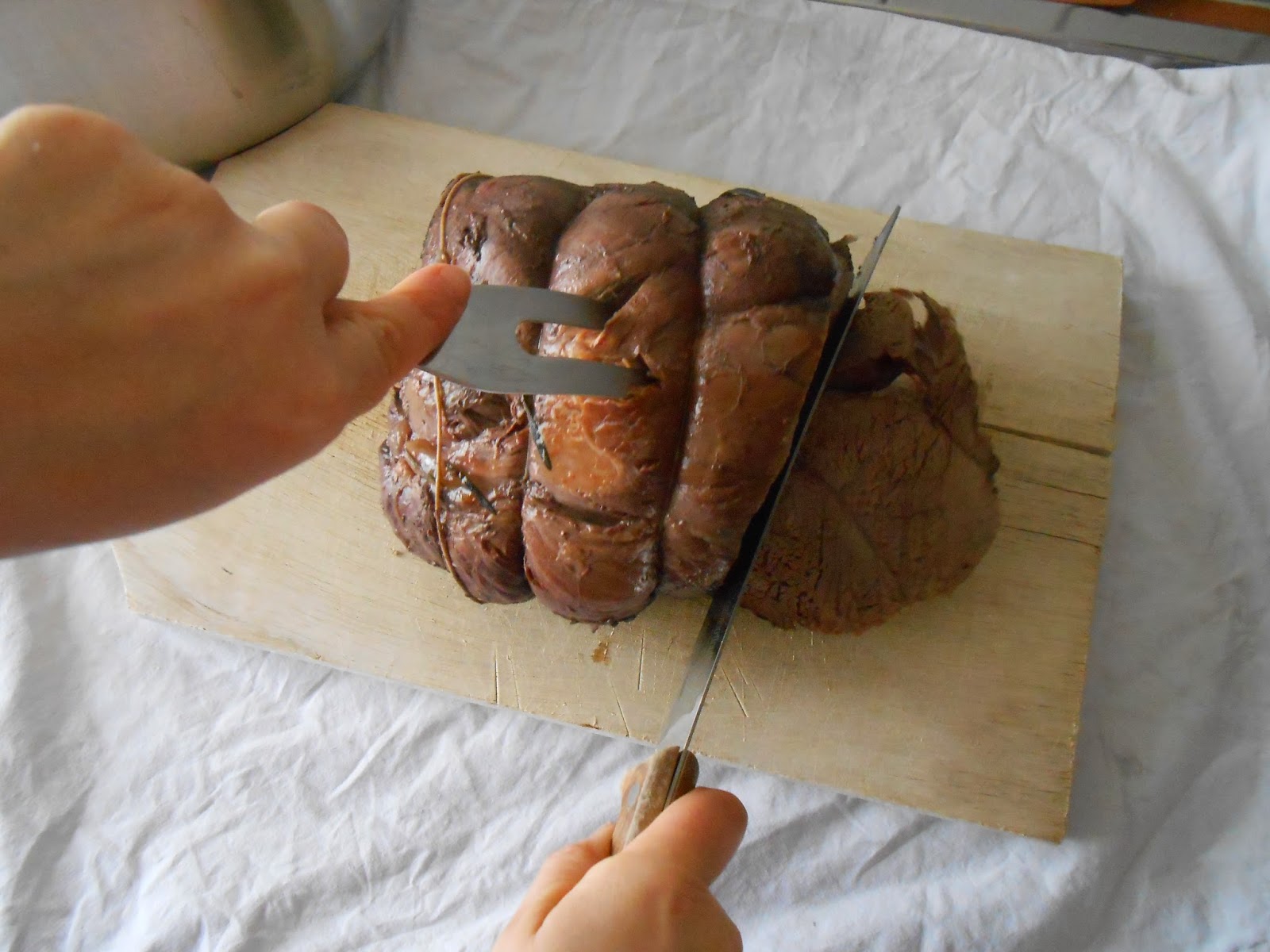 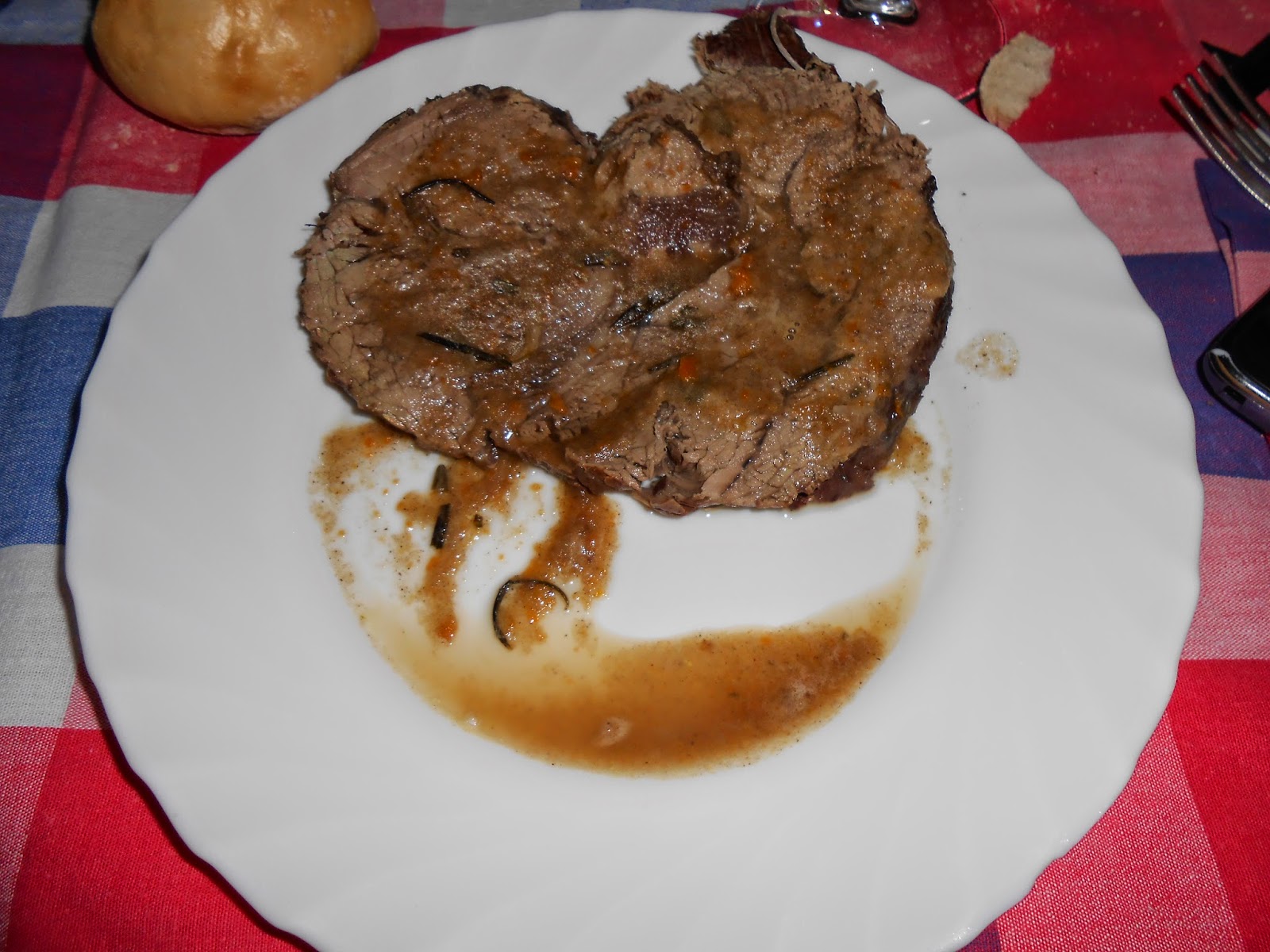