In Turin though every season is a great season to visit and currently, we are in full Mardi Gras season aka il carnevale 😆
The Italian Holidays officially end on January 6th and that's exactly when in Piedmont we announce the beginning of the Carnival weeks. This is a traditional Roman Catholic celebration that officially ends on Mardi Gras or Martedì Grasso as the local say.


January and February are also the coldest months in Turin and Piedmont: usually between the end of January and the beginning of February we have the heaviest snow days. Most definitely if you ski, this is the time to take advantage of all our many Olympic ski resorts and ski tracks on the Alps surrounding Turin.
You can even just come and go by train to Bardonecchia from Turin in the same day!

So what do the locals do during these two months?

In Turin you can always find:


Early January is for the winter sales, as the sale seasons are regulated by the Italian government, this is a big event all over the boot! The ski week is in February, some years it coincides with Mardi Gras, but as Martedì Grasso is set 40 days before Easter, its date is different every year, thus the ski week tends to be around V-day.

As Turin is a multicultural city, we also have some little celebrations for the (Chinese) Lunar New Year: a dragon dance, decorations with the new year animal, official events take place at MAO or Museum of Asian Art and if you eat at Chen Lon's, in Via Principe D'Acaja 35H, you will find a special Lunar New Year menu 🙆

To native Italians though Carnevale is really a synonym of costumes and fritters. Click here for our  fritter recipe, wine pairings and pictures.

Since traditionally Italy doesn't have a Halloween, this is the time of the year to wear a costume and make jokes before repenting and purging all our sins for 40 days before Easter.
Costume parties are organized everywhere from kindergartens to offices and many people love making their own costumes. The streets are happily covered in colorful confettis and streamers that you will also find in many shop windows on top of masks. 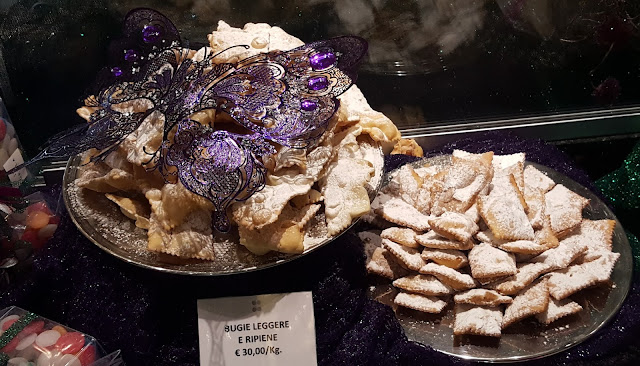 Like any other Italian city, since the 1500, Turin has her own Carnival characters: Gianduia and Giacometta, his girlfriend.
So locally we have our own candy: caramella Gianduia - available only during the Mardi Gras season!! Bring it back home as a great local souvenir for you won't find it anywhere else!

In Ivrea, about 40 minutes driving north from Turin and connected by train too, the oldest Italian Carnival celebration takes place every week up to Mardi Gras 😎 Click here for the official calendar.
This Carnival celebration is unique because it is the only one with a plot blending historical facts of different centuries of the local history, whose protagonist is a heroine 👸, gorgeous costumes and rough orange battle!
Yes, read it correctly: in Ivrea, Piedmont, the locals divide into teams aboard chariots and on the ground and they fiercely throw each other oranges 😂 Unless you want to be hit by one, don't forget to wear your traditional red Phrygian cap!

As you are in the area, you just can't miss the local specialties and the fairy tale wine: Erbaluce di Caluso DOCG the only Italian wine that awarded a DOCG certification for all its variants!!
Unfortunately, as the recipe of Torta 900 is a secret of Pasticceria Balla that you must visit, you can certainly make up for it at home with this recipe of the Ivrea cookies.

Valentine's Day falls during the Mardi Gras season as well and what a better place to celebrate than Turin: the chocolate capital of Europe since 1600??!
Following Marc Antony's steps when he seduced Cleopatra, we highly rec you pair your Turin chocolate with a great bottle of aprhodisiac Brachetto D'Acqui DOCG. The terroir of this aromatic wine will enhance the high quality of our locally produced chocolate.

Turin and Piedmont always give you many excuses to visit all year long and no matter the month, you will always experience a different side of our local life!
Allow yourselves 5 days to get to know Turin plus extra days on the mountains and for the Carnevale in Ivrea!

To add one of our private tours, tastings or classes, e-mail Lucia: turinepi@gmail.com