The Watchful cook at TurinEpi17

Our dear friend Jan Egan aka The Watchful Cook is sharing her experience as Turin Epicurean Capital guest. If you wonder about the insider's perspective, Jan is shading some light!
Grazie mille, Jan!


If you have read my first post on this site, or indeed on my own site, you will know that the northern Italian city of Turin holds a significant place in my heart. To be invited therefore, to attend Turin Epicurean Capital 2017 was a source of huge excitement and an immense privilege. Lucia has asked me to write my impressions of the week and as the lovely and talented Patricia Boner https://foodiesneakpeeks.com has already given a chronology of the week that cannot be enhanced, my intention is to write a personal reflection of some of the events of the week.

Landing at Turin Caselle airport (after travelling for nearly 12 hours - the British Airways ‘plane developed engine problems, but mercifully before we took off) was a bit of a novelty for me as I normally arrive in Turin by train having travelled from our apartment in Milan. Travelling to the city centre is a breeze as the SADEM buses run frequently and (compared to London) are incredibly cheap at €5. Lucia as organiser of this event had kindly arranged for me to stay at Best Western Plus Hotel Genova. Now, I have to say that grateful as I was for this arrangement, I was slightly apprehensive as the Best Western brand in the UK is not terribly well regarded, and tends to be two and three star hotels in “not-exactly-the-best-part-of-town”. Was I in for a surprise…

After travelling for the best part of twelve hours (three of which we spent in a stationary plane on the tarmac at Gatwick), I was, hot, sticky and tired. To arrive in a cool, tranquil, classically decorated hotel less than five minutes walk from Porta Nuova station and be greeted with a huge smile and sympathy for my travel travails lifted my spirits immediately. And oh my, what a room! A huge jacuzzi bath in the bedroom was the principal feature, complemented by a beautifully equipped shower room, highly efficient air conditioning (in 36°C plus 65% humidity, that air con was a godsend) and one of the most comfortable beds I have ever slept in. If you’re going to Turin (and you must), stay here if your budget is in the medium range. So after a shower and having scoffed the fruit thoughtfully left for me, I was ready to face the week.

The Day One Round Table opened in the wonderful theatre of Collegio San Guiseppe (which also contains an absolute jewel of a Baroque chapel) in my favourite part of Turin and was moderated by Margaret Goldstein aka @pizzabianca from Chicago and was a lively discussion amongst Sanam Lamborn of http://www.mypersiankitchen.com, Christina Conte of  http://christinascucina.com and oenophile Bill Goldstein who can be followed @Sassodoro. It was heartening for me to see and hear first hand that concern about food integrity and authenticity - concerns close to my heart - are felt globally.

The event Lucia had organised for the evening was for me, the highlight of the week. We all made our way across the River Dora to via Parma (and my Italian must be getting better if I can now make reasonably fluent small talk with taxi drivers) arriving at a fabulous place called QuBi, run by the lovely Margherita Frari who has a vision for this kitchen, eating and exhibition space as a meeting place for this increasingly multi cultural city. It is the venue for local produce collection rather along the lines of www.foodassembly.com in the UK. Turin needs spaces like this and I do hope she gets the support she deserves from local people and the City Council (Comune). When you make your trip to Turin, do go for lunch at www.qubitorino.it or maybe have a cookery lesson too! 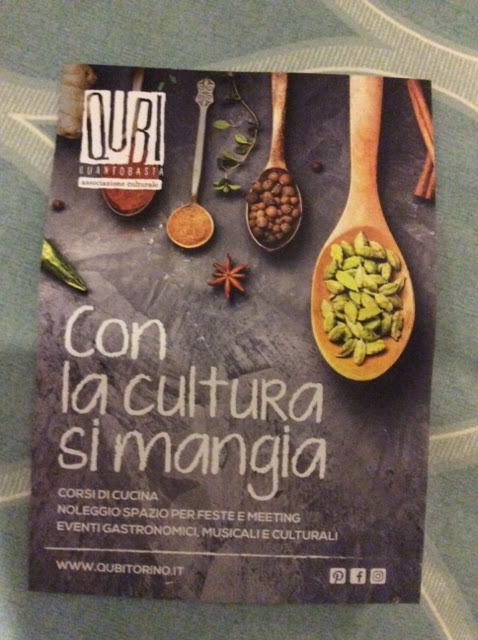 The main thrust of the evening was for us to have a hands-on cookery lesson from Margherita and Marco Giachello, who is a well known chef, specialising in using Piedmont ingredients. The first course was local Tomino cheese and Bagnetto Verde alla Piedmontese. It was instructive to taste the difference between the bagnetto made by hand and that whizzed up in a processor. Might have to mend my ways…

The second session was making Risotto al Barolo. Now, given that I was taught some years ago how to make risotto by a strictly traditional Milanese lady (who slapped my wrist with a wooden spoon if I got it wrong…), I thought I knew how to do this. Nope. There is a Piemontese way of doing it and I know only the Lombard way. I’m not saying that my lack of knowledge prompted pitying looks exactly but I was left in no doubt which was the better way! I am not going to detail here about the differences between the two methods (as I’m hoping Lucia might invite me to write a separate post about that!) but to see the Carnaroli rice toasting in a dry pan, separately from the gently dissolving onion was certainly very different from the Lombard method, as was the slightly more al dente rice.

Do I need to add that it was delicious? Dessert was a peach stuffed with amaretti and rum which I have since made here in the UK, having substituted brandy for rum and coffee for chocolate, neither of which I am that keen on. Also learned a lovely presentation detail as you can see in the photo. 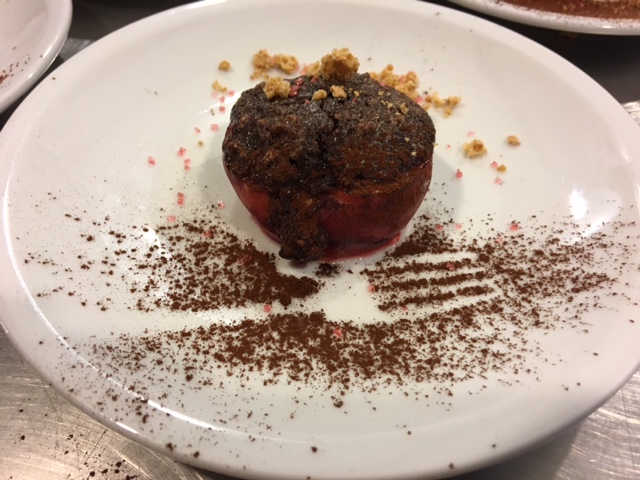 The second day’s Round Table saw your writer earning her keep in a discussion about food memories, chaired by Daniel McVicar, with gifted photographer Ilva Beretta http://www.ilvaberetta.com and astrologer Patrizia Balbo https://www.linguaggisimbolici.com.  As I’m a Brit, you can imagine that my earliest food memories don’t involve anything too special. I was truthful in saying that one my earliest memories involve Heinz tinned spaghetti in so-called tomato sauce and served on buttered toast. I know, I know, but I will say in my defence that when first tasting this vile combination as a small child, I immediately spat it out. Deplorable table manners but a developed palate, even at four. I swear I saw some of our interpreters go a slight shade of green when hearing of tinned spaghetti. Can’t say I blame them.

The evening event saw us back at QuBi for a sensorial eating experience led by Dottoressa Lucia Andriolo who talked us through how our senses and our minds are affected by what we eat and drink. Margherita provided wonderful food which complemented the phases of Lucia’s presentation. Whilst not wishing to indulge in a weak pun, this session gave me personally immense food for thought, especially in the areas of comfort and mindful eating. Please do look at the detailed post here - I have found it incredibly useful and have referenced it a few times since the event itself. 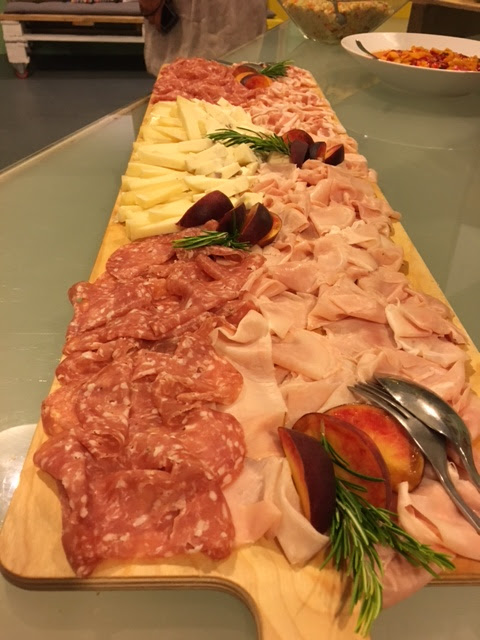 I must add, however, that my resolution to eat more mindfully was challenged when faced with an amazing buffet, courtesy of Margherita. Every component of this magnificent spread was Piemontese and an object lesson in selecting quality over quantity, not, as you can see, that it was in any way meagre!

Day Three started with an exceptionally interesting round table chaired by Carolina Stupino of http://tastesofcarolina.com, involving Amanda Courtney of http://www.amandaswineadventures.com and Patty Boner of www.foodiessneakpeeks.com. Interesting for me in that Carolina is native Piemontese (now living in London) and Amanda, a Bostonian, is an adoptive Piemontese; both had much to say on the subject of quality, fresh seasonal ingredients. Patty’s perspective was particularly interesting as she’s Peruvian born of Chinese parentage now living in Switzerland. Imagine the culinary heritage available to Patty!

I took a raincheck on the afternoon guided tour, mainly because Edoardo had arrived and we both wanted to do some research at the Biblioteca Reale, which is a hugely underrated resource for anyone interested in the history of northern Italy. The officials there are also very courteous and helpful, not to mention the building itself being just amazing. As a pair of bibliophiles, Edoardo and I dream of having our tomes in such apple pie order.

Reflecting on my thoughts around Turin Epicurean 2017 I realise than my main thoughts are the people I met (and with whom I will stay in touch), how much Turin deserves to be better known and how incredibly hard Lucia worked to put this together, for which just a thank you is scarcely adequate. She also has had almost zero assistance from the city fathers which is something I find disappointing.

Turin is a reserved city of discretion and elegance and which I adore, but if I have a regret, it is that so much seems still to remain to be done to promote Turin as a gastronomic destination. No one wants Turin to be a tourist hell such as Venice and Florence have sadly become, but there is much scope for bringing enthusiastic, educated gastronomes to this beautiful city, the cradle of some of the best Italian food and wine, not to mention its amazing history and architecture. This city is one of the great jewels in Europe’s gastronomic crown and I for one would love to see more people experience it.

I am already scheduled to return to Turin in October and am counting the weeks before I wander the portici, sample the wonderful food and wine and spend a day at the Alba Truffle Festival. Thanks to Turin Epicurean Capital 2017, I now know and love this magnificent city even more.

Text and photos
by

Thank you Jan, we are looking forward to seeing you again in October!
Posted by turinepi at 11:29 PM