The Turin Epicurean Capital 2017 activities finished with a walking tour offered by the GIA Tour Guide Association. Our tour was led by Laura Sgarlazzetta who strived to keep us cool, engaged and in the shade despite the exceptionally hot and humid weather.

After greeting GIA president Emanuela Moroni, we started our tour in Piazza Castello and found shelter in the beautiful San Lorenzo Church. As Lauretta said "inside this golden church we went on a mystical journey uplifted by the angels".

The dome is a top masterpiece of art, architecture and geometry as Guarino Guarini, the Savoy royal architect who was also a geometry geek, managed to light up the whole church naturally just by misaligning a series of overlapping triangles.

Next stop was the biblioteca reale or royal library hosting many unique treasures like the Leonardo Da Vinci's self-portrait, tons of precious historical volumes and antique globes made of painted paper.

We then crossed the piazza and walked under Turin's gorgeous and lifesaver arcades till café Mulassano where tramezzino was invented after the owner traveled to the US and fell in love with sandwiches!

Tramezzini are triangular white bread sandwiches with different fillings, you can now find them in all Italian coffee shops.

Then we got inside Galleria Subalpina near royal caffé Baratti before heading out to the Museo del Risorgimento entrance of Palazzo Carignano aka the very first Italian Parliament!
In the courtyard you can still see the original red bricks of the first part of the building and the Guarini's logo: the eight point stars all over the walls!
We crossed the building internally and to end up in Piazza Carignano to admire the façade.

For the art lovers, this is THE Piedmontese Baroque symbol: as the main wall made of red bricks moves like a ribbon, and some windows are topped with the Baroque scallop shell while others have a stylized Iroquois headdress as a reminder of the Savoy participation in the French-Indian War when Carignan-Saliére Regiment was sent to Quebec in 1666.

All the turinepi chocolate lovers were happy to enjoy an a/c stop inside the Guido Gobino atelier and slowly savor a gianduiotto without chewing it, just letting it melt on their tongues 😋

A last tiny stop was in front of a famous deli shop displaying a Montebore cheese. This was Leonardo Da Vinci's favorite cheese from Montebore in the Alessandria area, in the Monferrato wine district of Piedmont. 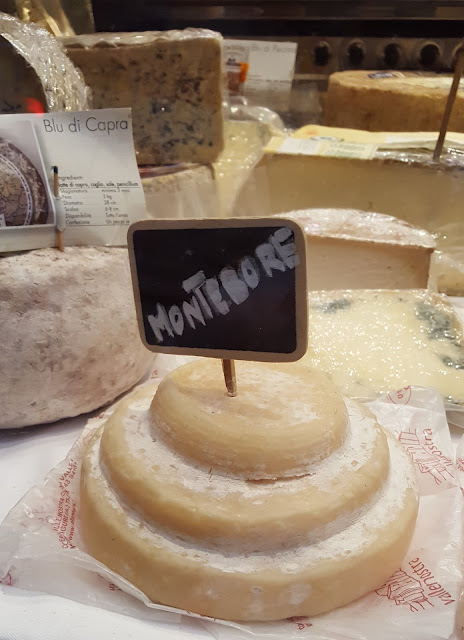 Montebore is made of Montebore sheep milk and as those cute sheep are endangered you can adopt them to grant them and their historical cheese a future.

Saint John the Baptist is Turin's patron saint and every June 23rd there is a parade in historical costumes that crosses the downtown streets before the bonfire in Piazza Castello.
After looking at the the first part of the parade, the Turin Epicurean 2017 guests enjoyed a good bye dinner near Piazza Castello so that we could go see the bonfire in front of Palazzo Madama.

The bonfire wood mound is topped by a cardboard bull - symbol of Turin, and the direction of its fall during the fire determines the city and its inhabitants' luck. For the year to come, the bull brought us good luck 😉

Festa di San Giovanni or Saint John's Day though is really Turin's July 4th as every June 24th there is another parade in historical costumes and fireworks on the river banks in Piazza Vittorio, the largest open square in Europe.
These fireworks are really cool as they are paired with music, this is why Turin Epicurean Capital is organized around this big Turin event, and particularly this year all our guests who flew over to Turin from far away decided to stay extra days to enjoy the city and its celebrations.

What a successful fourth edition we had!
More than ever we had a rich program of activities, the hottest weather in 250 years and endless fun.
The guests left sad and slightly pissed off because - quoting Sanam Lamborn and Christina Conte: "three days only in Turin are simply NOT enough" 😎

You heard that so check your flight over to Turin airport *TRN and plan your visit over here soon.
As Jan Egan said: "Turin is the pearl of Europe, with its gems, an amazing Opera house and outstanding food and wine culture" 👏

Patty Boner even invented a Spanish verb to describe Turin: turinear that means being in Turin and enjoying a luxury life full of good things to do, see, eat and drink!

So don't wait and if you are interested in sharing our crown and live our vida royal, e-mail us for your travel planning: turinepi@gmail.com .

For all the foodies, wine lovers and fashionistas who are interested in taking part to the 5th edition of Turin Epicurean Capital in June 2018, e-mail us for the details: turinepi@gmail.com .

Thank you so much everyone for sharing our very own Turin on your SoMe accounts, Turin and Piedmont are too royal to be missed out!