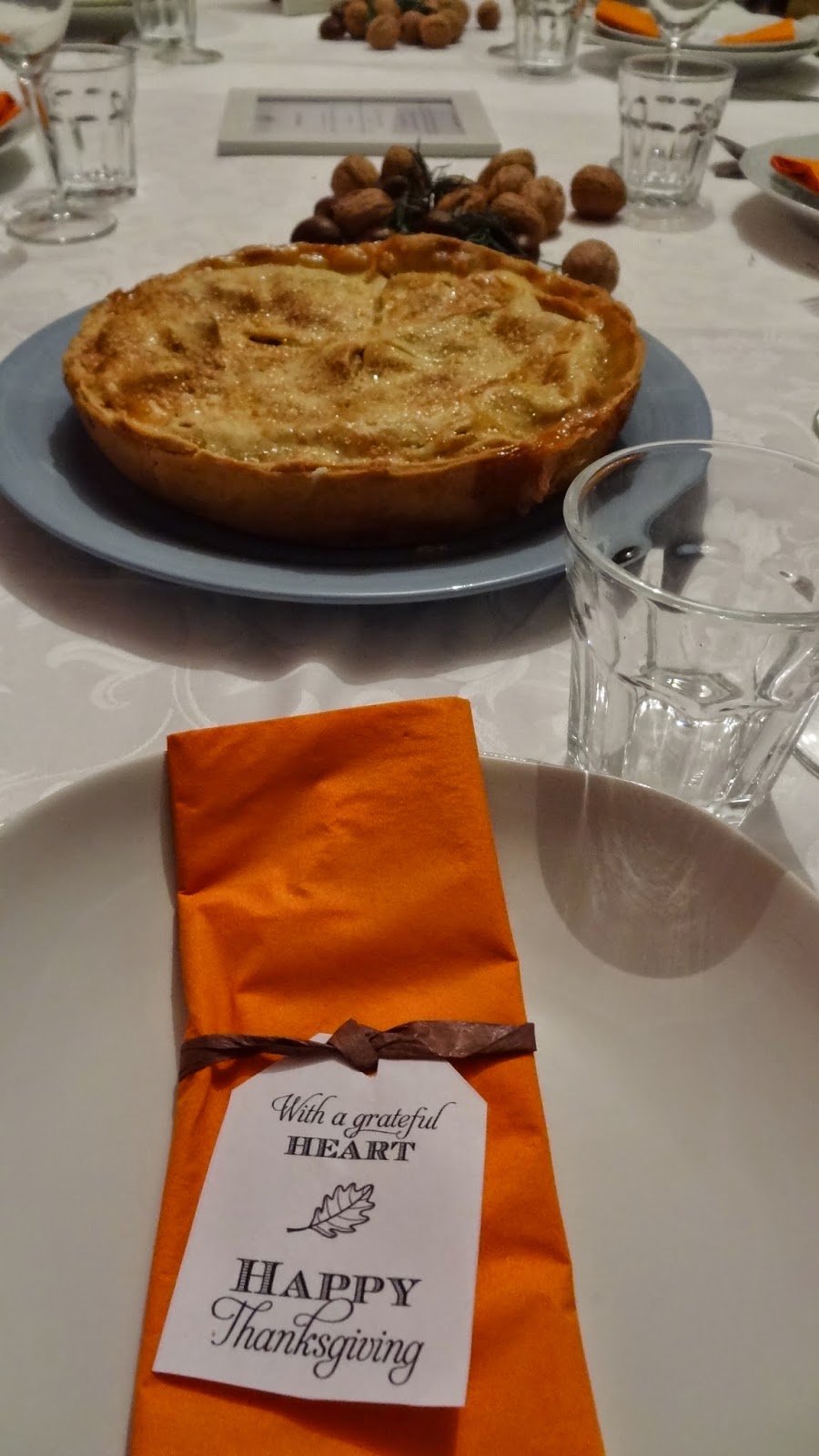 As many US expats must have experienced by now, abroad there is no Thanksgiving Day... and Italy is no exception therefore, we tend to celebrate it during the week-end...yeah, not the same, we agree, both ingredients and flavors slightly change too, yet it is still pretty awesome that we can take the time to be thankful and share food with some really good friends when away from our families.


In Turin, we took the week to visit a couple of the many events that take part in the last of November and totally devoted our Saturday to the Thanksgiving Day dinner!
In fact, our team is extremely lucky because Benedetta Oggero - aka Miss Bee is a good friend and collaborator AND she has a BIG passion for cooking and eating, so she had us all at her place!

Benedetta inehrited her cooking passion and culinary dexterity from her mom. In fact, she grew up in a home where friends and family members were always felt welcomed to eat, and food in its more convivial aspect has always been part of her life, even when she moved to London. Getting to know the ingredients' origin, and how they are made, selecting the sellers - sometimes also befriending them to secure the best products! - designing menus, pairing the right flavors and styling a table are all Benedetta's favorite time in her busy week.

This is how T-day came up this year too and Benedetta called her local butcher to make sure a midsize turkey of about 7kg/15.5lb could make it to her table. Usually, Italian turkeys aren't big compared to the American ones and their general flavor is much milder too. As smaller Italian turkeys are more flavorful, many expats just give up and roast 2 large chickens, but Benedetta didn't give up and completed her T-day shopping over the week, visiting import stores, markets and different grocery stores.

As Italians aren't used to eat dinner at 4pm, on Saturday, Benedetta got up "late" and started cooking at around 9am. She started with the apple pies, first the the crusts, then the filling. We were a pretty large group of 16 hungry and thankful foodies, so the menu was rather elaborated!
Consider also that the average European, and especially Italian kitchen is rather small compared to the average American one: the fridge and the oven require a calculated strategy that by now, Benedetta masters perfectly!
After the pies, she prepared the hard-cider sangria with citrus and pomegranate  seeds. As this delicious drink marinated, she took care of the other dishes. First, she prepared the cream of pumpkin soup: she cut and clean the pumpkin, roasted it with different herbs and spices and then boiled it. 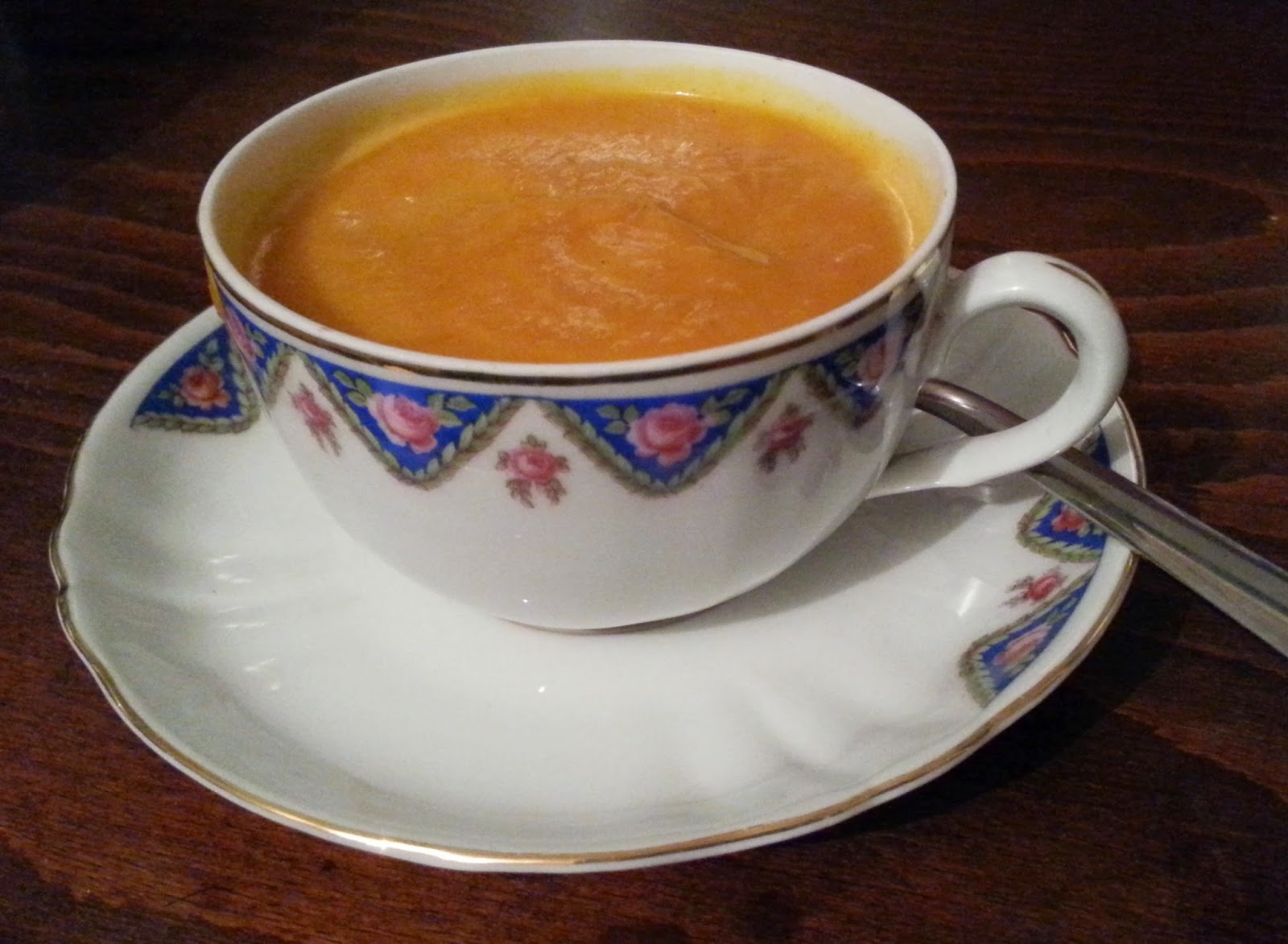 Then it was the turn of the Brussels sprouts cooked with cubed pancetta, mixed roasted vegetables and the fennel spread.
Naturally, she also managed to bake a loaf of beer bread that was ready right before she started to roast the turkey at 4pm. 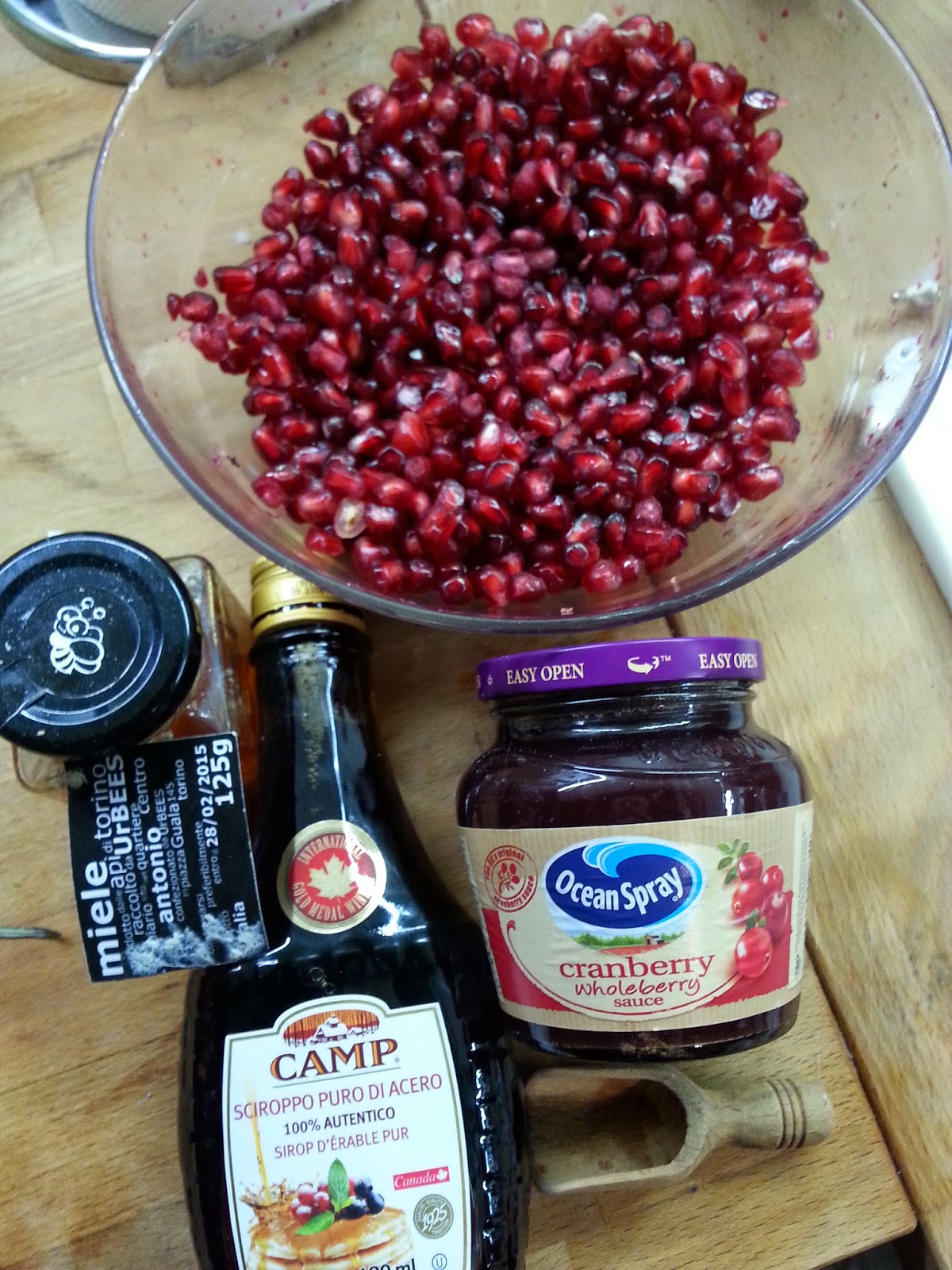 Mashed potatoes couldn't miss in this scrumptious menu and only when the turkey - all rubbed in herb butter, finally made it into her oven, she started to setting the table.
Fall colors and mixed nuts welcomed us but the real china, glasses and silverware really added an extra touch that made the atmosphere a lot more familiar and warm.
As we sat down, before the first sip of the hard-cider sangria, we decided to follow the tradition and saying loud what each one of us was thankful for.
2014 was a busy year for all of us, sometimes we thought we were losing our sanity and yet, we stayed together and learned a lot! Turin Epicurean Capital was and still is the result of our common efforts, so we were particularly thankful for the good time we had together as a team and over the dinner, we remembered some of the most hilarious anecdotes. 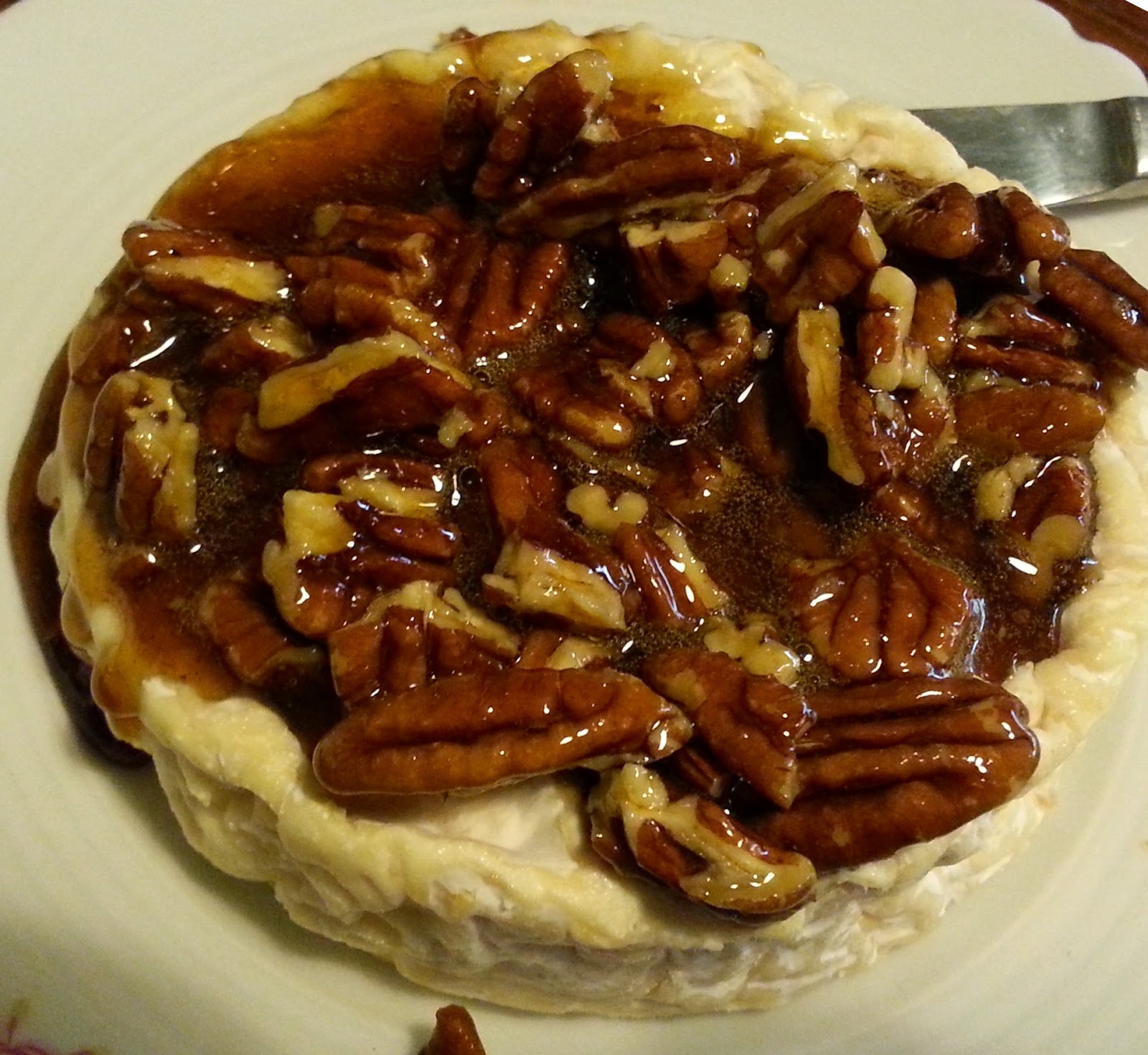 Like in a parade, the aperitivo opened the dinner with the fennel spread served on the crostini, The real dinner started with a mixed green salad with persimmons and pomegranate seeds seasoned with a mustard homemade vinaigrette; cream of camembert cheese with maple syrup and pecans (soo hard to find here!!) followed:P
The cream of pumpkin soup served in old style tea cups was the delicious queen of this celebration before his majesty the bird made it to the table!
Somebody at our table had never seen such a big turkey so they felt the need to take a selfie :D 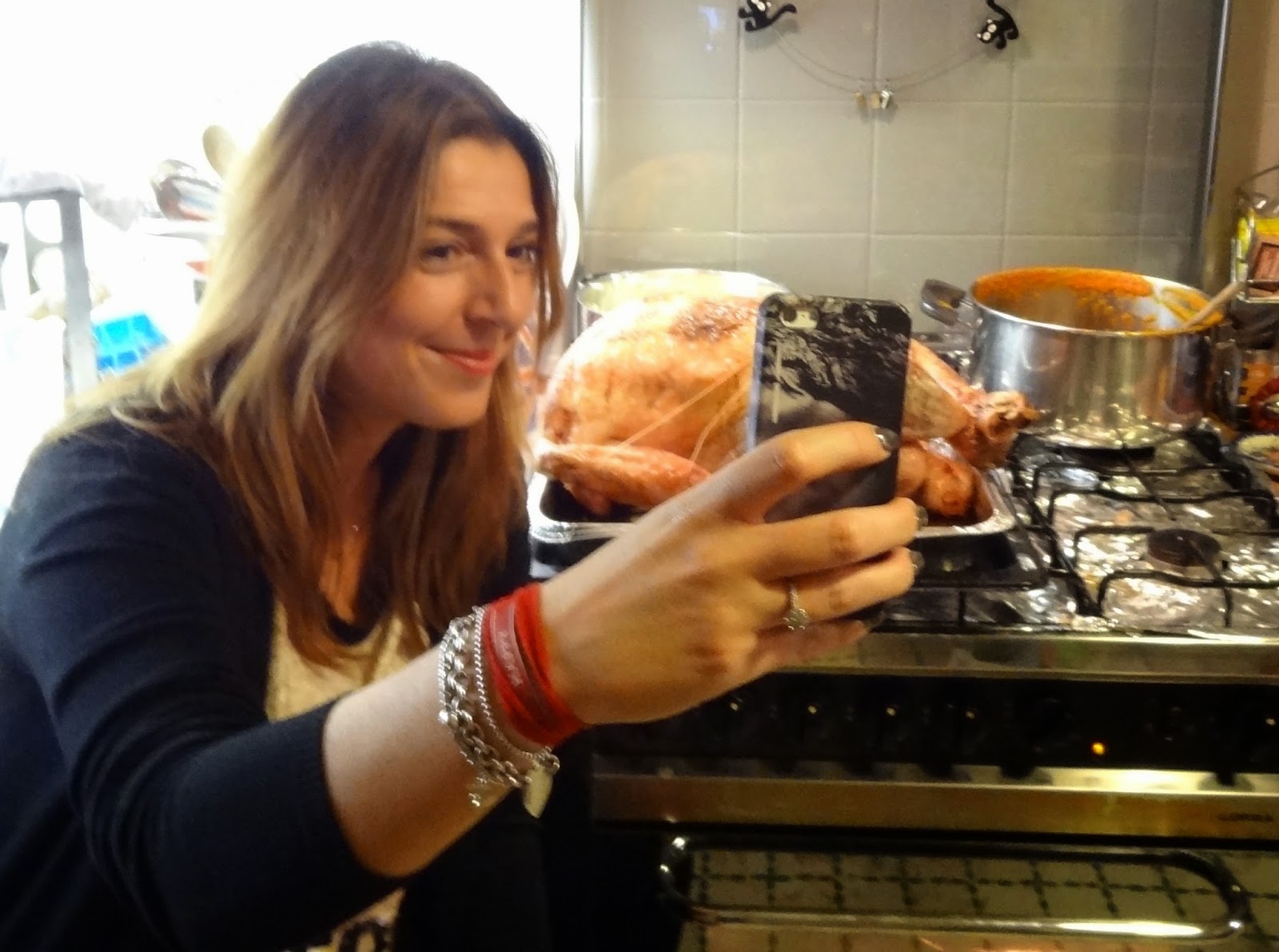 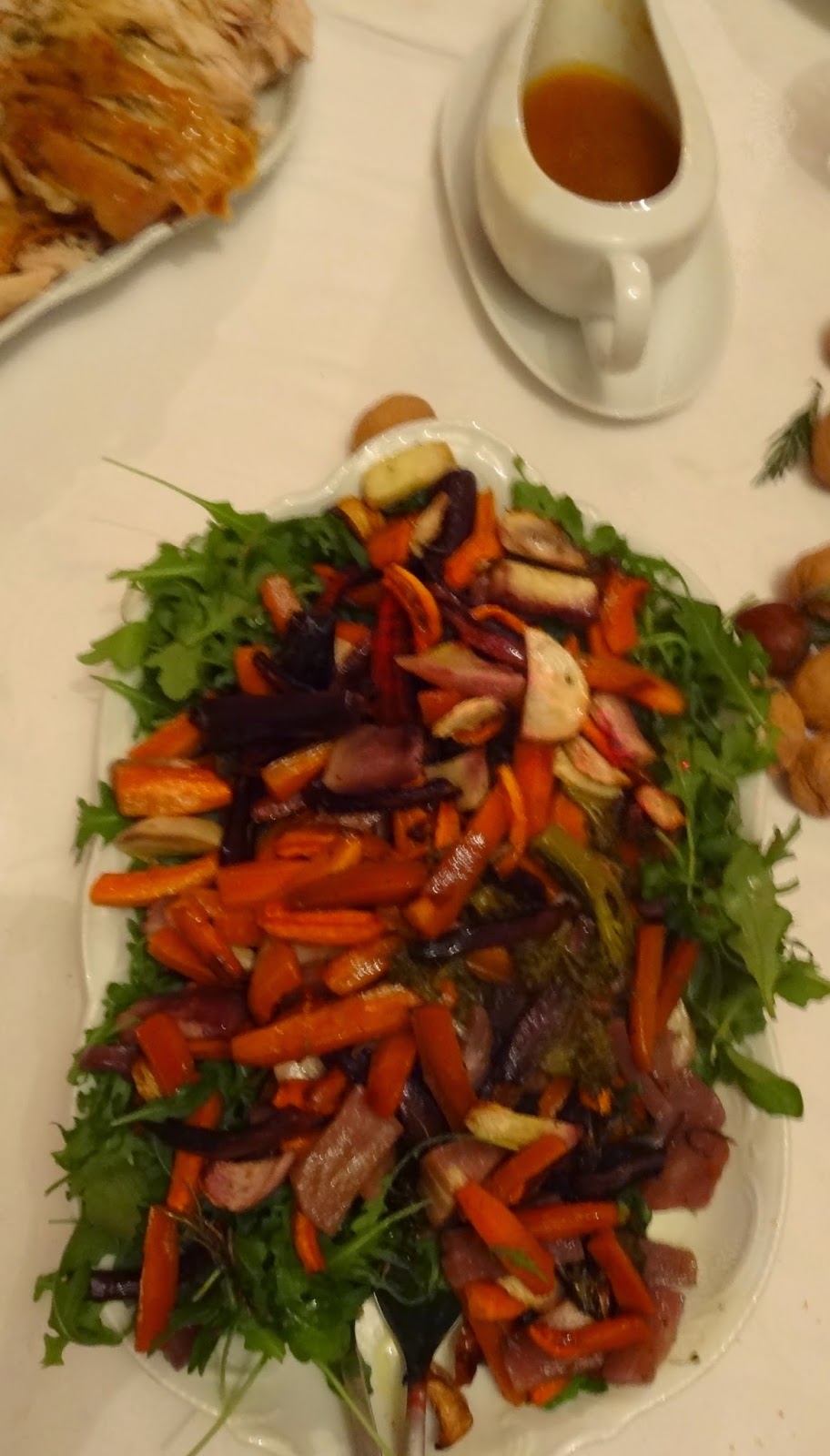 
At that point, we still had a tiny place to squeeze in a final slice of apple pie: cinnamon, ginger and clove filled out the room as the pie got served.
Some of us concluded the dinner with an espresso, others with an herbal tea and very few with a digestive shot of herb hard-liqueur made by a tiny community of monks who grow their own herbs.
Everything was over the top, and in the end Benedetta didn't have many leftovers... just one drumstick, 2 portions of soup and only one quarter of the two apple pies she had made.
Even the wines were all gone: Carema from high Piedmont, a super fruity Arneis for those who prefer white wine and a frizzy and aromatic Brachetto to sip with the apple pie. 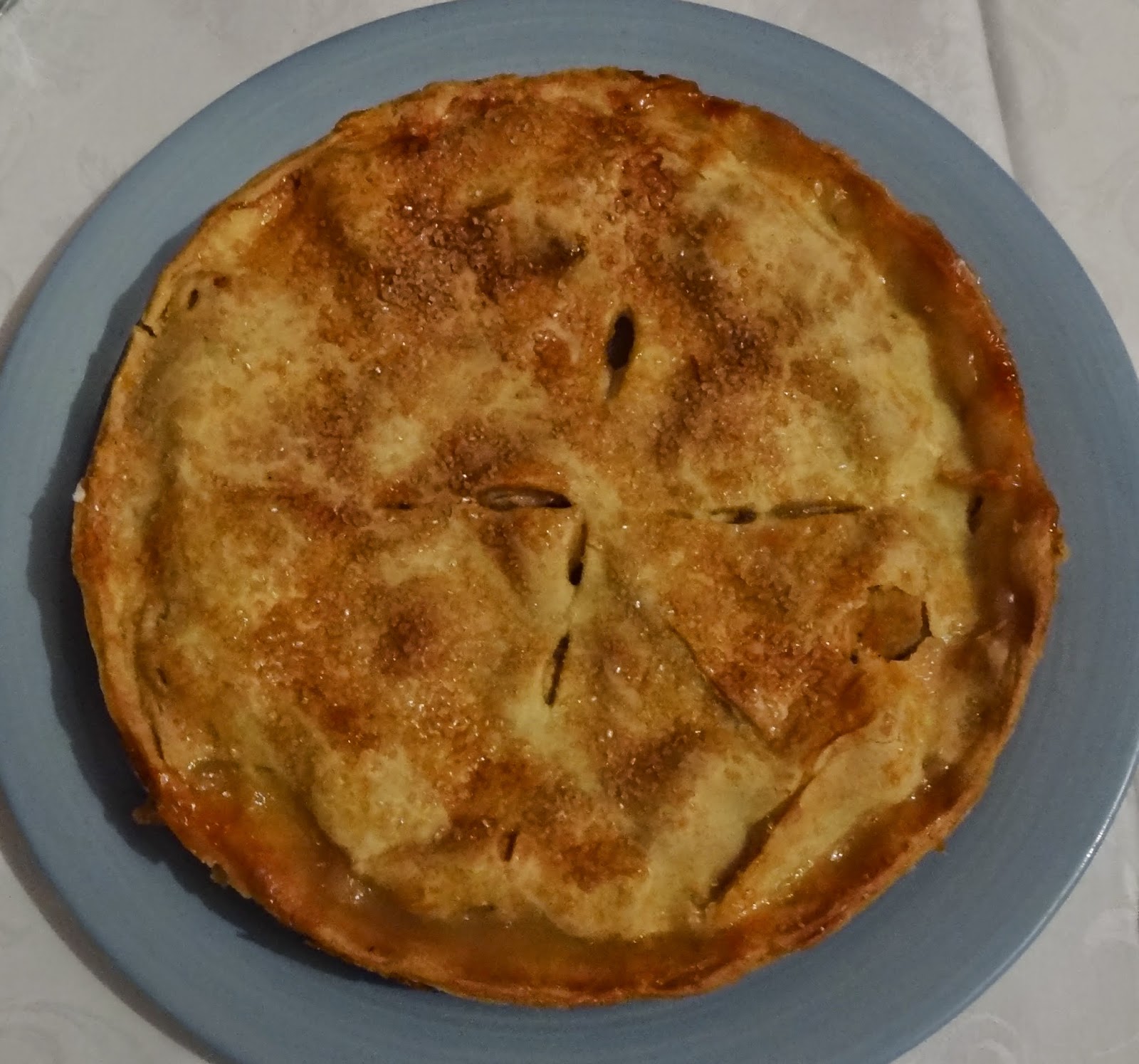 Thus, victims of the turkey coma, we spent Sunday napping like Miss Bee's cats. As November with all its events and Thanksgiving Day are gone, the Holidays have officially started so stay tuned to know what happens in December in Turin and Piedmont!