a visit to the Negro Wine Estate 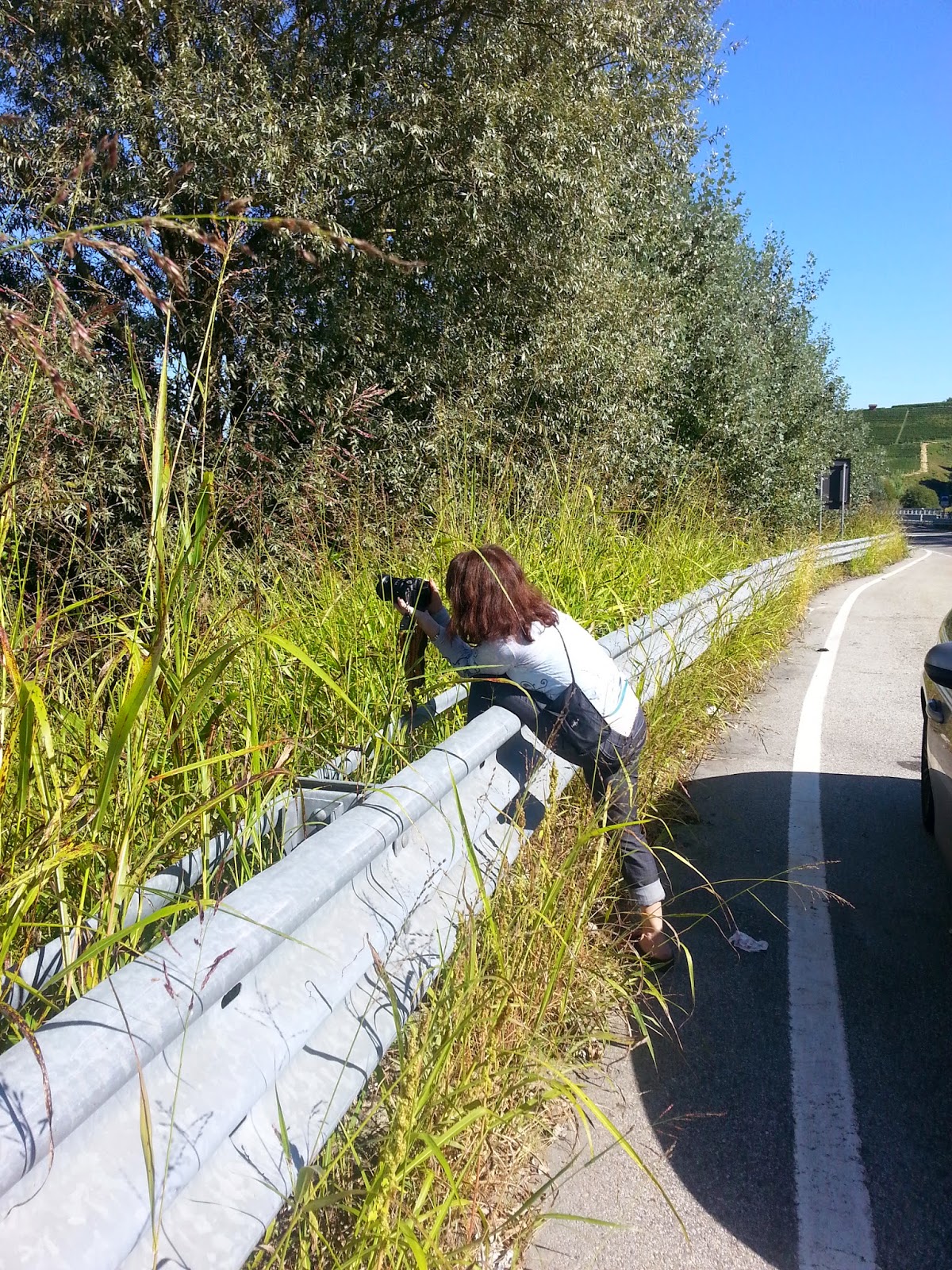 As Mara LeGrand needed to film a garden, we followed Ms Ilaria's advice in Canale and reached her "godfather's garden" in Monteu. From the state road we got into a smaller one leading through a chain of vineyard covered hills.

The first thing we noticed was a bilingual sign titled "Humus" indicating how no chemicals are used on the property and right behind the sign there was the garden. To avoid trespassing private property, even only to venture ourselves among the radishes and cauliflowers to simply film and take pictures, we decided to drive up the hill and announce ourselves, warning we would spend about half an hour in their garden and that Ilaria told us to come;) 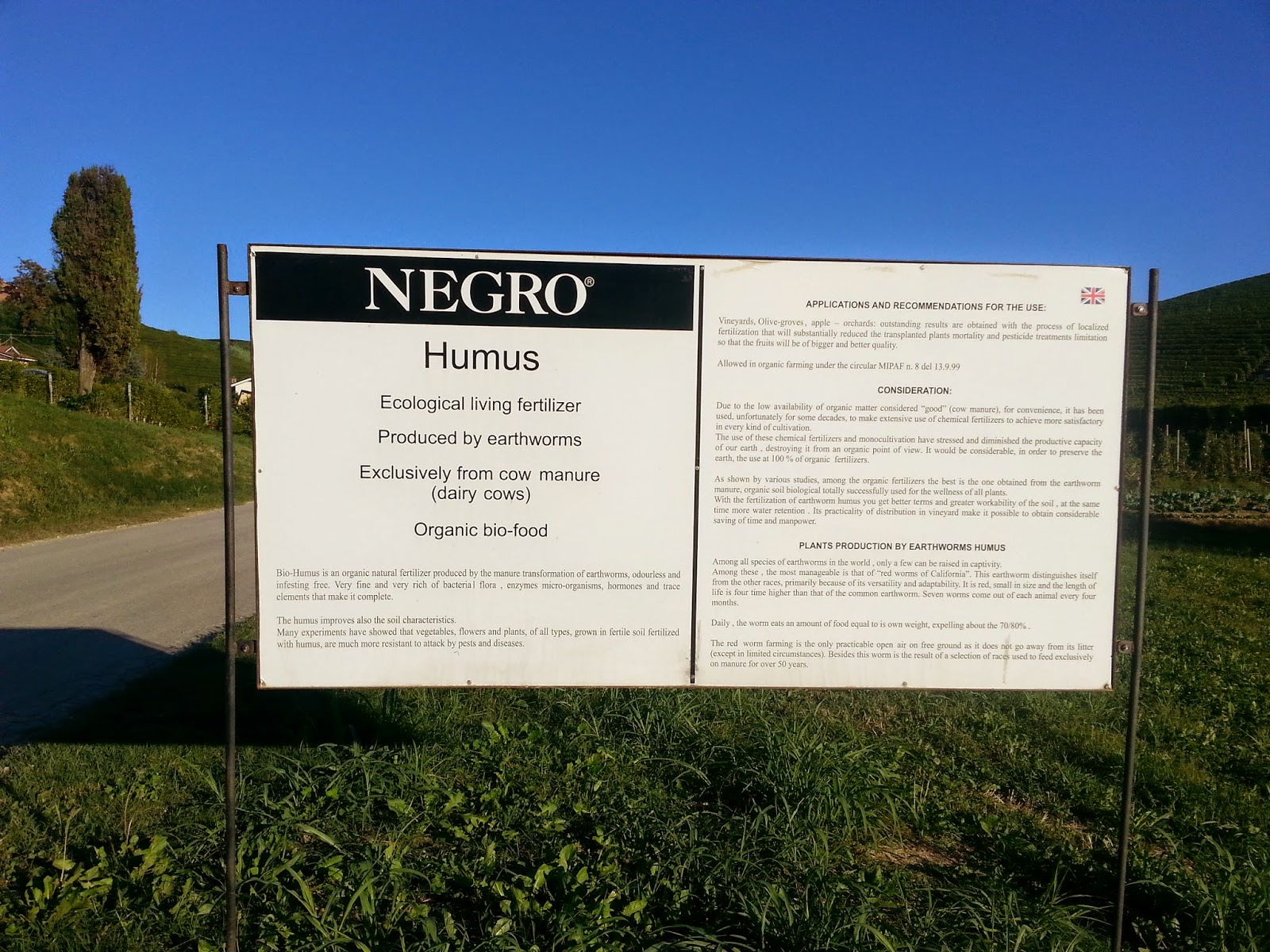 We parked the car in the courtyard of a nicely restored farm with a great view on the surrounding hills. Some antique machinery was exhibited near the main building to show how wine was made in the 1800s. The first thing we noticed as we got into the building was the estate registration certificate dating back to 1670! Wow!! and still we had no clue that was the Negro wine estate! 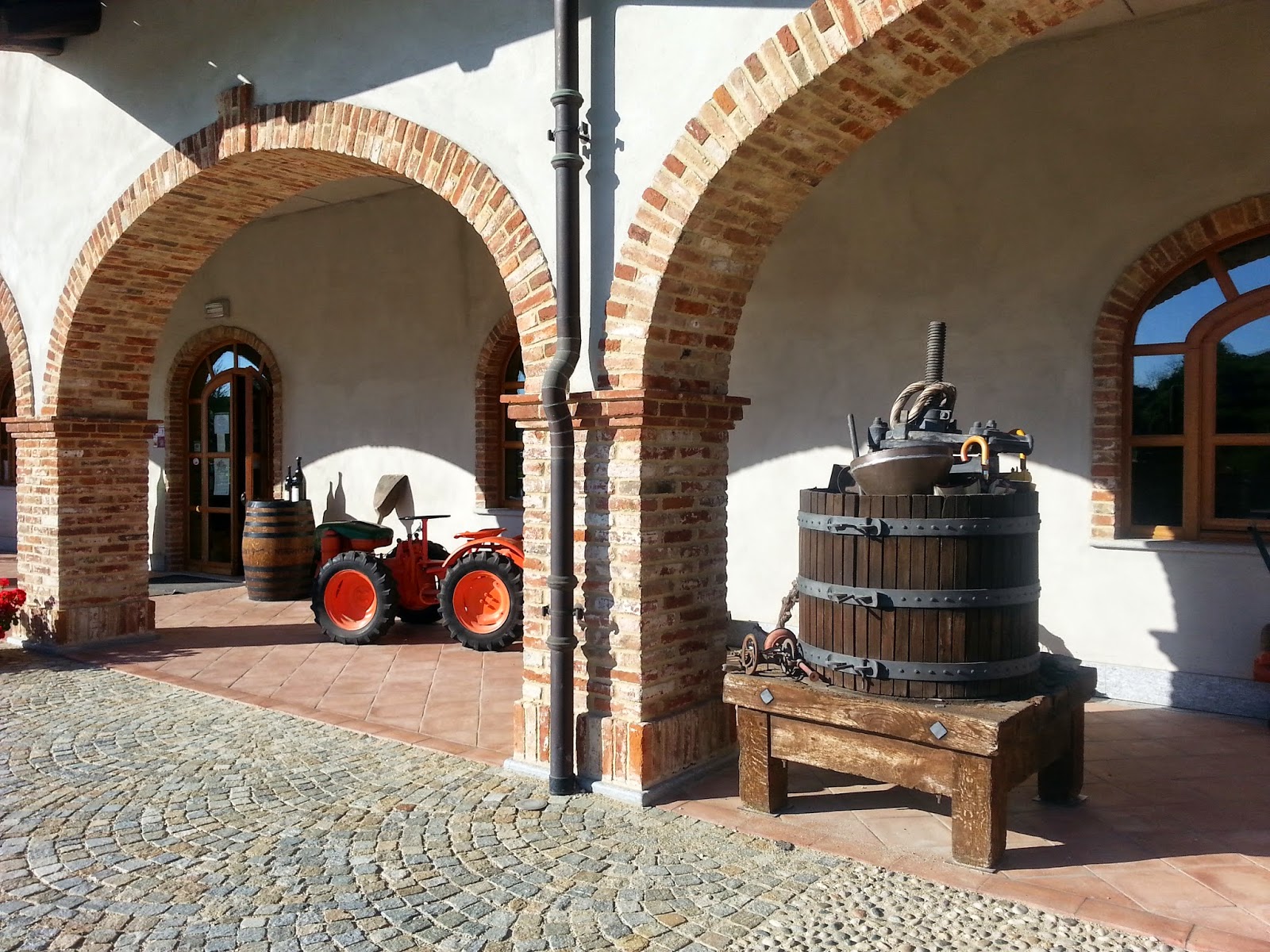 We spoke to Giuseppe, one of the three sons, and as he heard we wanted to see the garden, he called "the guy who took care of it" right away. On a white vespa Giovanni Negro, the owner of the estate, came to welcome us and invited us to get on his pick-up to show us around!
This is how he told us a bit about the history of the estate, how his family had always lived on those hills, in Monteu in the Roero wine district and how through the years, he bought 27 properties to unify them into the large wine estate tourists can visit now. 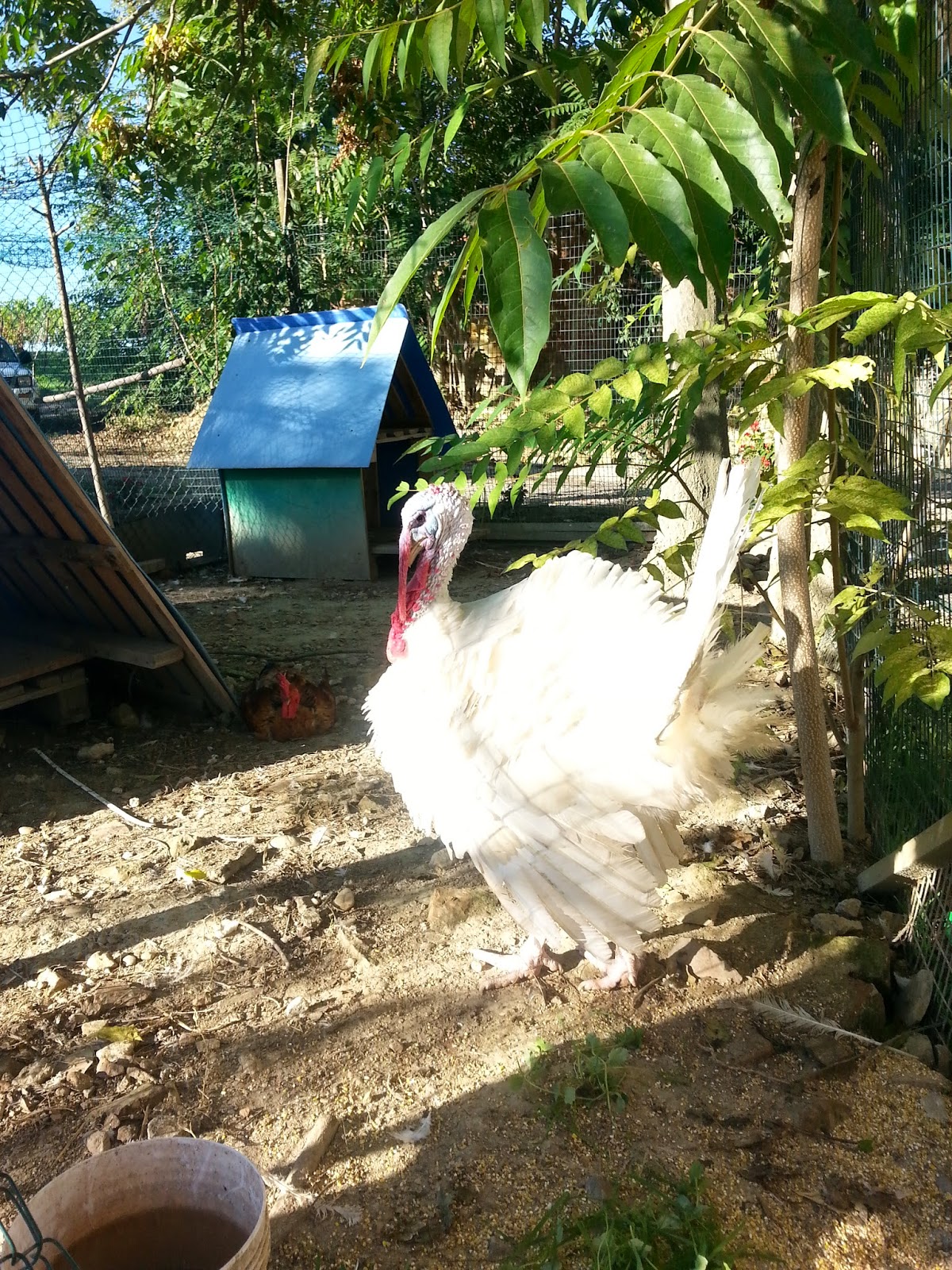 Mr Negro very graciously drove us uphill to the house where he was born and where we got the chance to have a close encounter with his happy roosters, four elegant guinea-fowls and the big white turkey.
Mara inquired right away if the Negros were growing the turkey to roast it and eat it, however in Italy we have no Thanksgiving Day and being Piedmont a mainly beef and veal region, white meat is in general not considered the best meat. Surprisingly though, Mr Negro replied "ho no, he's part of our family now, we would never eat him!".

A couple of roosters were out of the cage, enjoying a stroll on the hill because during the day, they are left out to walk around but at night, they have to get back in the cage, which is covered with a net to prevent the buzzards from eating them. These roosters' feathers were very shiny and the guinea-fowls looked very stylish in their tiny white dot covered black feathers. They looked like old-times ladies wearing a coat.
The turkey was rather surprised to see us but wasn't very talkative, yet he posed for a picture.

Down the hill, we stopped the garden: Mr Negro's pride. He had just gathered the zucchini and most of the vegetables yet he showed us all his plants: the tall zucchini plants, the different lettuce and cabbages, the two kinds of the eggplants (purple and white) and the tomatoes.
He confirmed that they use humus to grow their plants which fully provide food for his family, workers and even for the specialties served at the wine tastings in his cellar. To Mara's surprise he commented that with such an abundant vegetable production, his family is almost a vegetarian having renounced to meat for the majority of the week.
The nice thing though Mr Negro added was that as the garden rigorously follows the seasonality, every month there are different vegetables so next time we'll visit to admire the vine foliage around the hills, we'll see what his garden offers.

As the sun was going down, we got on the pickup again and drove up to the top of the hills to admire the landscape, the grapes and see the oldest Madernassa pear tree around. That's when we found out Mr Negro had been mayor of Canale and is good friend with Giuseppino Anfossi, our friend in Guarene. 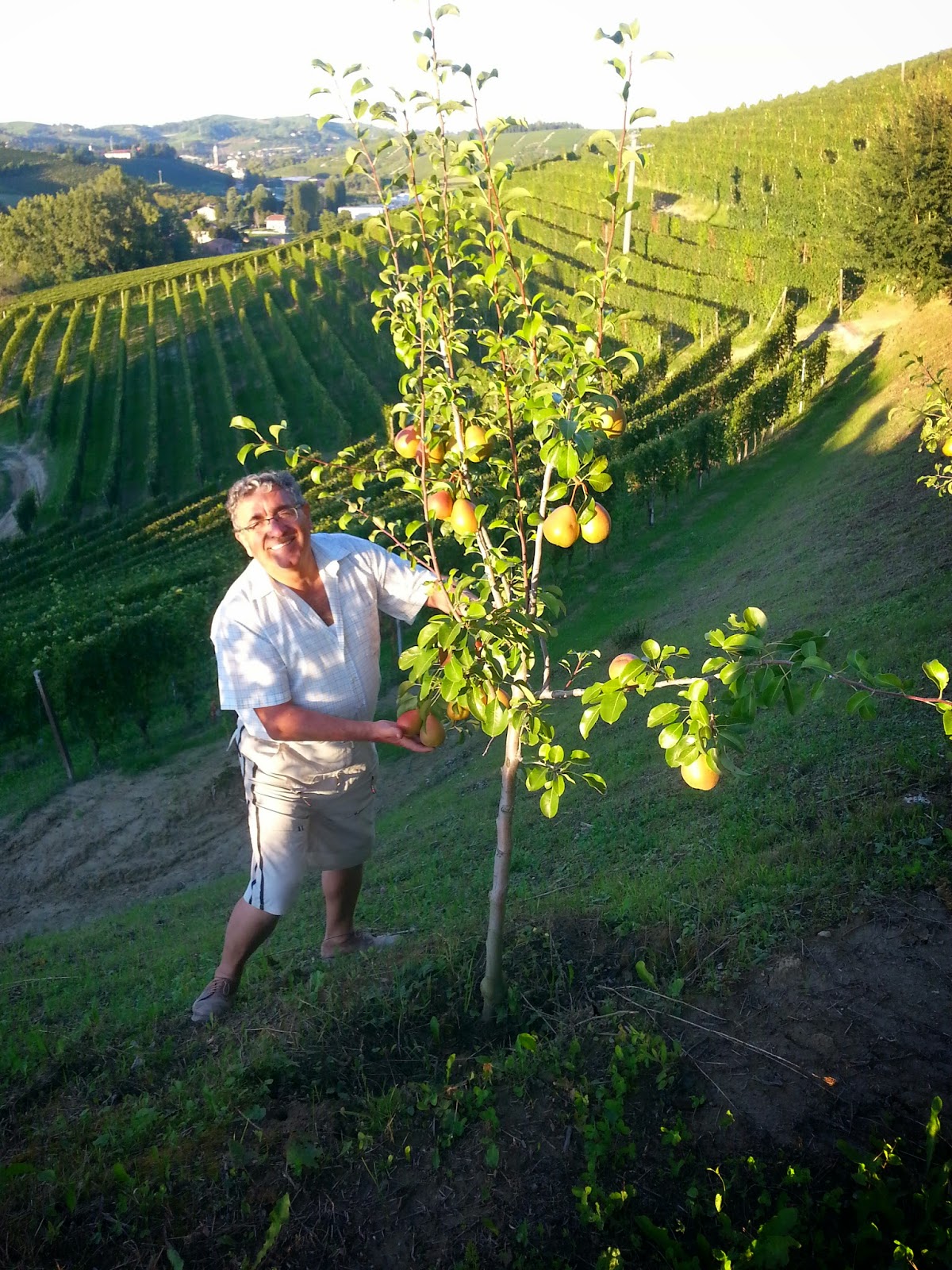 The hills at the sunset were bathing in a warm golden light, the leaves were of a sparkling emerald green and the Arneis grapes were ready to be harvested. Proudly, Mr Negro referred to the Arneis bunches as "gold" both for the color and the high quality of the wine that will be made. 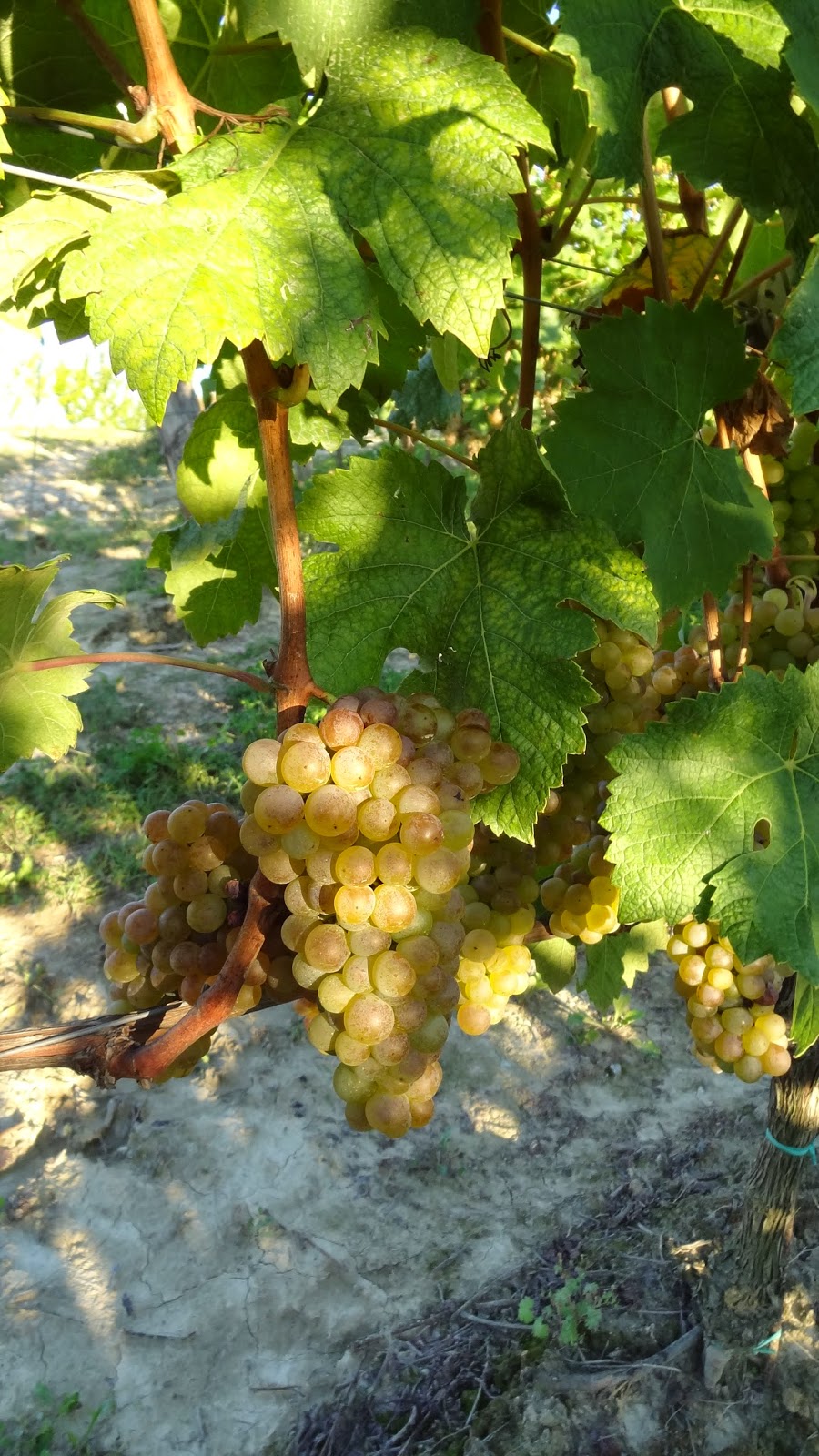 Driving uphill, he showed us how at the end of each row of vines, a rosebush had been planted to add a touch of color to the sea of green leaves. He had followed the same concept in his vegetable garden by planting marigolds at the edge.

We stopped in a couple spots to film and take pictures of the vineyards and then we walked to the fig trees and to the oldest Madernassa pear tree. Holding a pear in his hand, he showed us how the colors changed and explained to us that in the fall, the Arneis vine leaves will turn golden yellow, while the Nebbiolo vine leaves will be flaming red.

On these words we walked back to his pick-up parked near wild strawberry bushes and drove downhill at high speed! Back to the main building where we had parked our car, we thanked Mr Negro a lot and told him "arrivederci to the fall to film the vine foliage".
Our Saturday devoted to take views and landscapes was complete and after less than one hour driving, we got back to Turin. 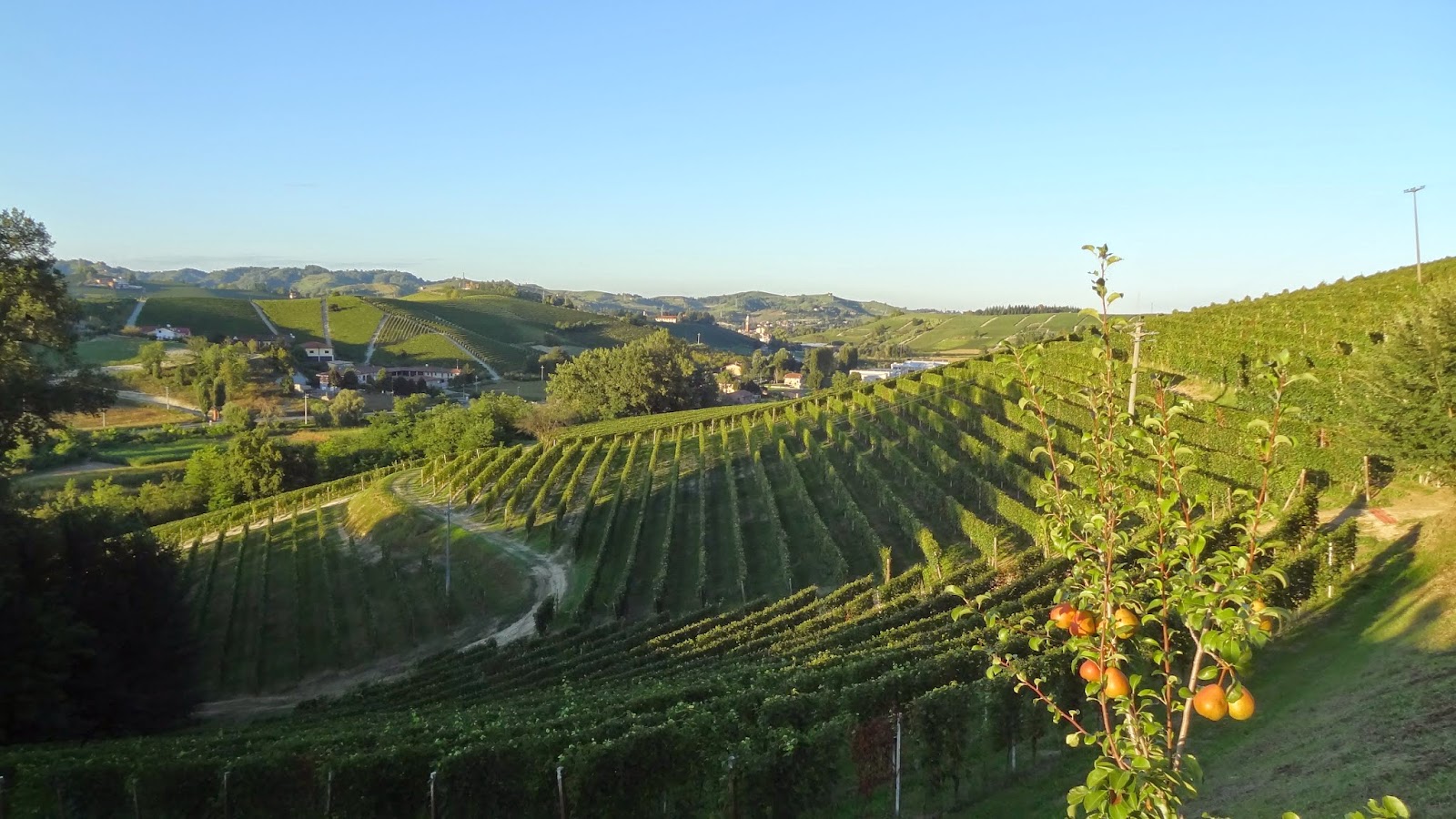