Lovers of Italian art and architecture, follow us in our exploration of another of the 114 churches of Turin: chiesa della Madonna del Carmine or the church of Our Lady of Mount Carmel. 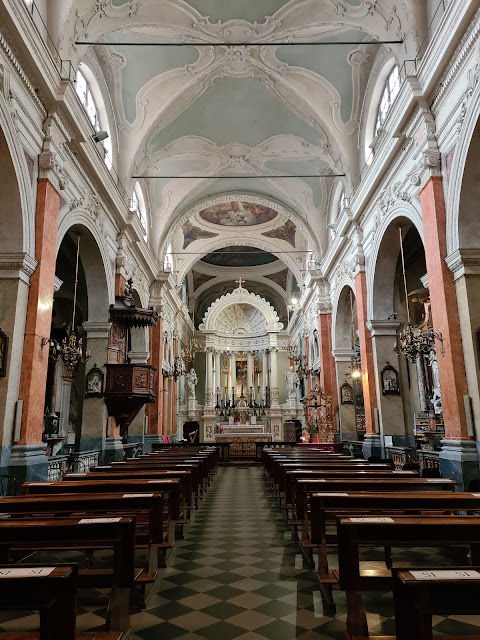 This small but impressive church is located in the historical downtown behind pedestrian Via Garibaldi, in Via Bligny at the corner with Via del Carmine. It is very close to 1500s Farmacia Collegiata in Via del Carmine 1 and at the corner of Piazza dell'Obelisco, on your way to Basilica della Consolata, Al Bicerin café and the Rosa Serafino herbal shop (for the Italian video here).

It was designed by the Baroque royal architect Filippo Juvarra, a big name here in Turin for he designed most of the historical buildings. It was built between 1732 and 1736.

Unfortunately, a bombing in 1943 destroyed a big portion of this church that was rebuilt and restored following the photographic records. Finally, it was reopened for service in 1955.

This church was requested by the Carmelites in 1718 when they moved to this area from their old smaller convent. King Charles Emmanuel III approved and assigned the project of this church to his royal architect Filippo Juvarra and the works started in 1732. However, Mr Juvarra couldn't personally supervise its construction because was called to Lisbon to build the new royal palace. This church was blessed and dedicated to Our Lady of Mount Carmel in 1736.

However, its façade was completed in 1782.

The distinctive sign of this tiny church is its natural light coming for the windows placed on the small cupolas on it's roof. It's small plan and high ceiling amazes both visitors and worshippers. In fact, this tiny church has only one nave with six oval chapels, three per side, decorated with colorful marbles.
An arch acting like frontispiece divides the three chapels with new statues that substitute the original wood ones made by artist Stefano Maria Clemente who also made the baptismal font.

Completed in 1763, the main altar guards a relic of blessed Amadeus IX of Savoy (from the Savoy royal family that founded Italy) donated by King Charles Emmanuel III to the Carmelites in 1739. It is also made of colorful marbles and it is richly decorated with cupids, garlands and silver candle holders.

In its semi-elliptic apse with columns, there is a big icon portraying Our Lady of Mount Carmel and the blessed Amadeus IX of Savoy.

The squared bell tower was built in 1734 and it is connected through the sacristy; you can reach the top through a narrow and steep spiral staircase.

A copy of the original one destroyed in the bombing, the electric organ has three keyboards, 49 divisions and 2750 pipes.

Like most churches in Turin, you won't think much of it from the outside BUT once inside Madonna del Carmine you'll be amazed by its light and elegant architecture.

After all this is our style here in Turin where people don't like to show off and boasting is considered bad taste. We rather keep everything superficially understated and amaze those who give us their trust and curiosity!