Turin Epicurean Capital 2017 was such a great success that the guests left 2 days after the end of our turinepi activities feeling they must come back for more! 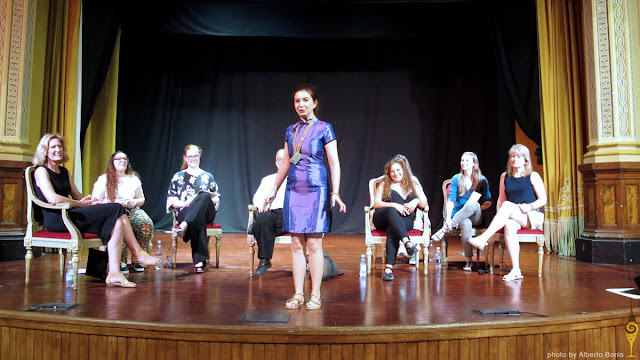 We started on June 21 with the first talk show hosted by Margaret Goldstein aka pizzabianca on Twitter. the guests were Margaret's husband Bill Goldstein aka Sassodoro on Twitter, Christina Conte better known for her blog Christina's cucina and old time friend, Sanam Lamborn or My Persian Kitchen who wrote one of our first guest posts about saffron.


Bill and Margaret shared that they started collecting wines in the early 1970s because they couldn't afford buying the most expensive ones. So they decided to start their own personal cellar connecting the wines with the cuisines they loved the most. No wonder, they love Piedmont so much!

Sanam was born in Iran and spent about ten years in Rome, Italy before moving to the US to study at college. Family has always played an important role and flavors and dishes were passed down to her through her family. Even her Italian nonna was making pasta and this has given Sanam a passion for good food so she now tries to continue the family tradition.

Margaret told us that back in the 1960s in the US, access to fresh food was rather hard and so her mom had a menu schedule that covered up to 3 weeks. She mimicked Italian tomato sauce by adding Campbell's soup to pasta. To Margaret it was so disgusting she would just have it "in bianco".

Although born in Scotland, Christina didn't grow up with traditional British food. Her father had a one of the best fish and chips shops in town. From a tiny village near Cassino, Italy, her mom got married very young and followed Christina's father to Scotland without speaking word of English. She cooked mostly Italian, growing the vegetables she needed in her garden.
They started eating ethnic food when they moved to the US, when Christina was eleven. Their neighbors were Korean and thanks to them they got acquainted with Korean food.

Bill became a wine aficionado during college and at the same time he found out that the world of wines is too wide for one single life. To narrow it and highlight the terroir, he decided to connect it with the food of the country. This is how he has been specializing in Italian wines. They actually fell in love with authentic Italian cuisine by watching Molto Mario with Mario Batali.
Too often we forget that in Italy we have 2000 grape varieties that produce wine and it is Bill's wish to taste as many as possible!

After this first talk show we went to lunch and enjoy some a/c.

The full Turin experience had started, somebody got a gelato for lunch, somebody else a fruit cocktail, Sanam and Christina had Gavi wine and Patty Boner, Jan Egan and Margaret Goldstein had an Aperol Spritz.

This first talk show was very entertaining and started the "tuna casserole" theme, a surprising recurrent topic in this fourth edition of Tuirn Epicurean Capital 😅

After lunch, we had just a couple hours to relax and power nap before the TurinEpi cooking class with Chef Marco Giachello.