This 2022 is proving to be another trying year and we feel the need call to our rescue somebody powerful. The perks of being a Roman Catholic are definitely many, for example, we have the sweet and fat Mardi Gras season and we celebrate name-days like a second birthday, with wishes, presents and sometimes even parties. Most of all though, the plethora of saints we worship guarantees us to be covered in all fields of life! 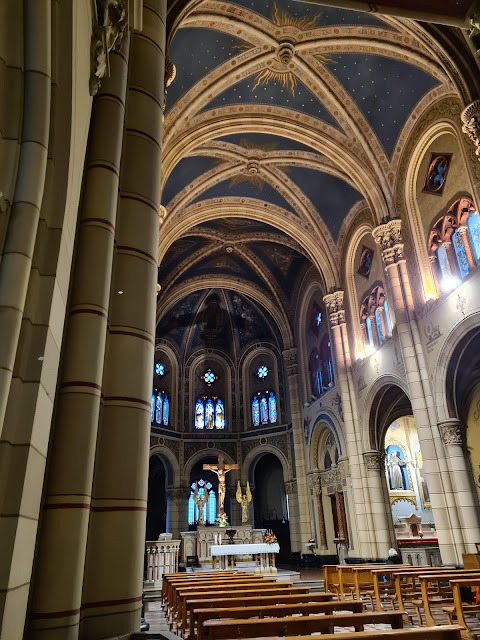 To non-Roman Catholics all our saints are 'just folklore' as some professor of Italian at the OSU said... they all seem to be equal just like our churches, but in Italy, we do notice the difference and worship a specific Saint according to their importance - or power - as told by their miracles. Same rule applies to the church, cathedral, duomo or sanctuary we choose to attend.

This was also a topic of one of our recent Italian classes, and students were curious to learn how in Turin we have some churches of preference and how this 'preference' changes according to the Turinese's needs.
Turin counts 144 churches in total but not all are always open and not all are always available for all the rites. Traditionally, locals attend the mass at the closest church by their house, or they pick one in an area they particularly like. This is for the regular weekly worshipping.

Non- Italian speakers don't have much choice because they can only go to the San Rocco church, in Via San Francesco d'Assisi 3, by the Sephora in Via Garibaldi: on Sunday the service in English and it is a one of a kind experience! Post to come soon 😉

If you have any special need, request or problem, being it health, money, family or school then you have to choose your church carefully. Many churches are dedicated to the Holy Mary because she's a great listener, healer and, as recorded by the Vatican, her miracles are undeniably powerful!

Some churches are dedicated to the religious orders that sponsored their building, but the majority is dedicated to one saint, their lives, teaching, mission and miracles.

As you might already know Turin occupies a privileged spot because the shroud of Turin is preserved right here in our Duomo di San Giovanni by the royal palace. We also have quite a scenic cathedral for the big occasions: la Gran Madre di Dio.

... and a couple of sanctuaries dedicated to a powerful saint as for example, Saint Anthony of Padua or of Lisbon, Portugal, his city of origin.

His life reminds us of Siddharta Gautama (Buddha) and St Francis of Assisi: born Fernando to a wealthy family in 1195, he studied theology and Latin and became a priest at 19. The Franciscan order had been established only 11 years earlier and following the arrival of a new group of Franciscan friars, young Fernando really liked their simple lifestyle, requested to join the order and adopted Anthony as his friar name. 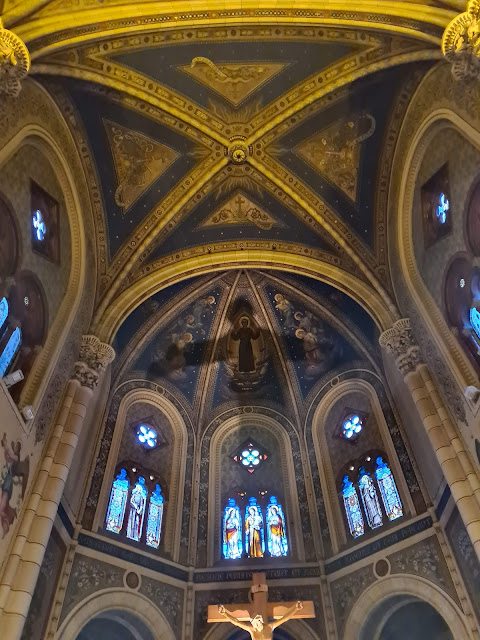 He was sent to Morocco but fell ill and on his way back to Portugal his ship was pushed to Sicily. He climbed Italy up to Tuscany, but he was so sick he was sent to a rural hermitage by Forlì, in Emilia Romagna, where he spent his time in a cave, studying and praying. In 1222, some Dominican friars came over for an ordination and there was a misunderstanding: nobody had prepared the homily. The Dominicans thought the Franciscans would do it and the Franciscans thought the Dominicans would because they were renowned for it.

This is how Anthony was selected and his sermon made quite a good impression. So he was sent to Bologna where he met St Francis who found in him a kindred spirit and who assigned to him all the new friars starting in 1224.

St Anthony of Padua is famous for helping people finding lost and stolen things, maids of all ages to get married and many exceptional miracles involving newborn babies and fish that speak. The first legends date back to his days in Bologna, when his precious psalm book was stolen by one of his novices and he prayed to find it again. Now that manuscript is preserved in the Franciscan friary in Bologna.

He also taught and preached in France before being appointed Provincial Superior of Northern Italy and choosing Padua as his location. St. Anthony is famous for his sermons rich in allegories and symbols and they were collected in his 'Sermons for Feast Days'. Pope Leo XIII called him 'the Saint of the whole world'.

Unfortunately in 1231, he caught ergotism and died a few months after, at 35. Naturally there are many legends surrounding his death and relics. His tongue, vocal cords and jaw were displayed in the reliquary and, it is said that even after 30 years, his tongue looked like it belonged to a living body! 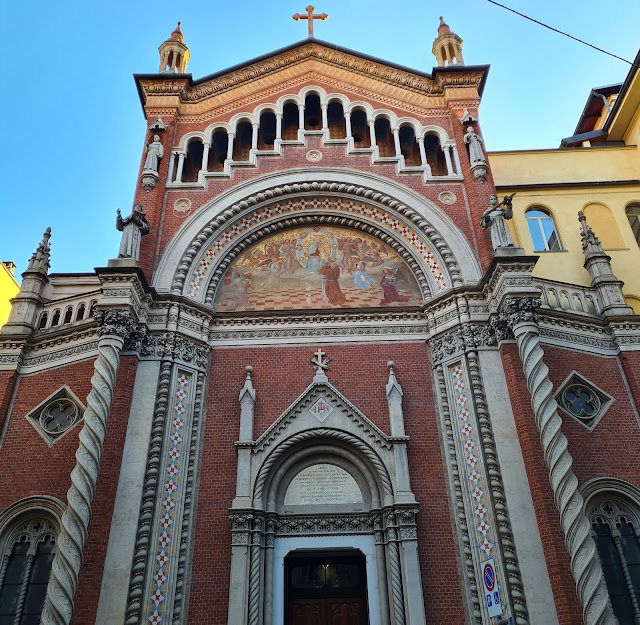 The miracle of the mule and the miracle of the talking fish are represented in the beautiful mosaic you see as you enter the sanctuary of Saint Anthony here in Turin. Even though this is not an historical church as it was commissioned in 1883 by the Franciscan order that lived in the nearby convent, it is definitely one of the top three favorite in Turin. Locals reach it walking from the Porta Susa station or by subway. The Franciscan or Friars Minor Order still manage both church and the joined convent where daily, they serve 60 meals to the needy ones.

It was consecrated in 1887 and the architect chose a mix of Neo-Gothic (the façade) and Neo-Romanesque style to highlight the connection with the original Sanctuary of St Anthony in Padua.  The fresco above the entrance shows Saint Anthony with the Holy Mary and the angels. Two lions guard the entrance and the worshippers. 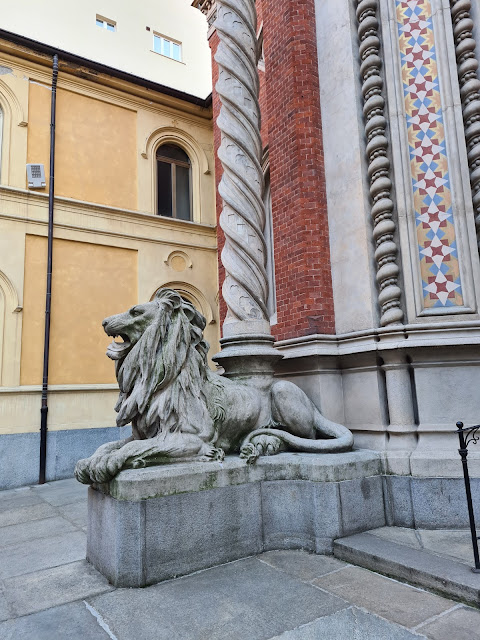 As you enter, on the right, you'll find a wood statue of St Anthony with the lilies, his flowers: they represent the purity of the Virgin Mary, our body and soul. On St Anthony Day (June 13) white lilies are gifted to the worshippers who can also purchase the Saint's blessed bread. This statue is sided by two mosaics where you can easily distinguish a mule on the left and some fish on the right to remind us of two of his miracles.

Legend has it that an heretic man challenged St Anthony to demonstrate with a miracle the presence of God in a Holy host. The heretic had a mule that wouldn't be fed for a couple days so that on the set day it would be easier to allure it with its owner's fodder. However, as the mule saw St Anthony in the piazza holding the host, it bowed before St Anthony finished his prayer. 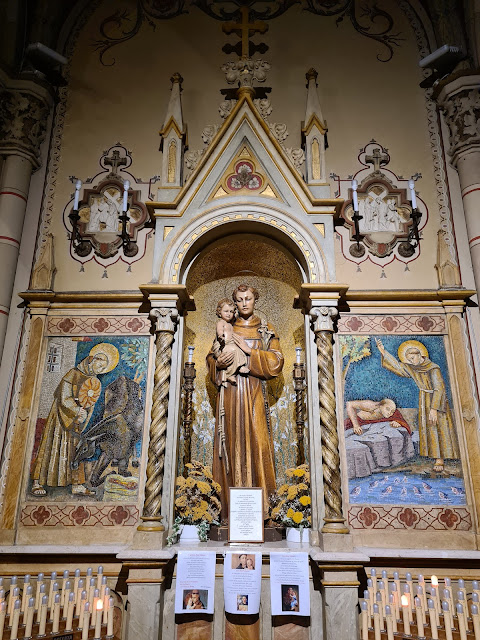 As you can see on the right some fish are sticking their heads out of the sea called by St. Anthony. according to the legend he was in Rimini on the Adriatic coast and the many heretics in town decided to isolate and ignore him. Out of desperation he went by the sea and started preaching to the fish who heard him and rushed to him in full happiness.

The miracle of the speaking newborn baby isn't represented in this church but it is  picturesque one. In Ferrara, on the Adriatic sea there was a father who couldn't even touch his newborn baby boy because he believed his wife had betrayed him. St Anthony came to their house and holding the baby asked him to say in clear voice who his father was. As the little boy was swaddled, he couldn't move his arms and hands to point his father, so he said: this is my father!

Before Covid19, between the candles, there used to be a pen, some paper for the worshippers' requests to St Anthony and a box to collect them but as you can see now there are only the prayers. 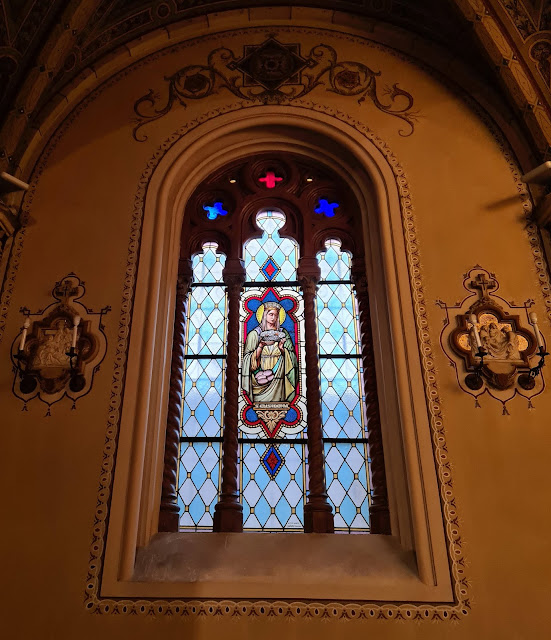 There is also a majestic pipe organ built in 1929. With its three keyboards of 58 notes each, a pedalboard with 30 keys, 41 tunes and 2075 pipes, it is one of the most unique organs in Turin and it is regularly used during the services. 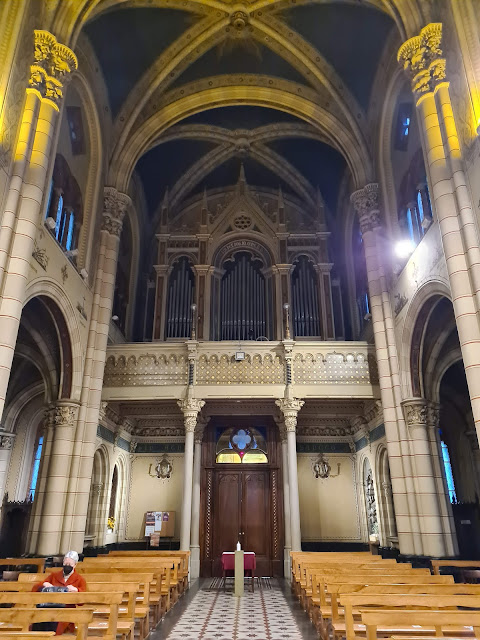 On an interesting note, this church hosted the Evangelical Lutheran community of Turin for 10 years till 2020. Their service took place twice a month and it was in both Italian and German. Now they are hosted in the St Francis of Assisi church.

St Anthony of Padua is a famous and powerful saint, 'his friars' are always very welcoming, understanding and available. You'll find churches dedicated to him everywhere in the world, even in India!

As our lives have been particularly shaken these last two weeks, we thought of asking him for another miracle to stop all wars and allow all the world's refugees safely back to their houses 🙏

Only he can help us this time 😢