Turin fashion designer Adriana Delfino in collaboration with Talen.To closed her fashion presentations about women designers with Elsa Schiaparelli. After stylish Coco Chanel and genius Madeleine Vionnet, Elsa or Schiap's sense of fashion can be described as artistically shocking and highly creative.
Her creativity survives as new to our days as we enjoy her fashion legacy on a daily basis whenever we wear fuchsia, wrap dresses, decorative zips, huge pockets and many other things that are now considered "normal".

All her creations witness her quick wit, education and curious nature, Elsa is born in 1890 to a wealthy Roman family: her father is an intellectual, one of her uncles an astronomer, the other one was Ernesto Schiaparelli, a famous archaeologist who directed the Egyptian museum of Turin.
She grows up surrounded by culture and books but, as she later writes in her autobiography Shocking Life her mom has always made her feel very self-conscious about her look.

After a short time in a boarding school in Switzerland - where she is sent after the publication of a love poem booklet, she follows a family friend to London.
Paris is the first stop of this trip and also her debut in the fashion world because for an important evening, she makes herself a wrap dress with a sheet. Unfortunately, as she can't sew, over the hours the dress falls apart.

In London, she meets the man who becomes her husband, a pennyless guy who claims to have psychic and other powers, a very charismatic personality that, at that time, represents to young Elsa the easiest way to escape her aristocratic "ordinary" destiny and arranged marriage.

At WWI outbreak, they move to Nice and then in 1916, to New York. This is the city where Elsa can finally feel herself as she hangs out with famous artists and intellectuals such as Man Ray, Marcel Duchamp and other dada/surrealist artists.
Unfortunately, right after the birth of "Gogo", her only daughter, her husband disappears, leaving her alone to provide for her baby girl who is soon diagnosed with polio. Despite all, life turns out well for Gogo whose daughter are famouse 1970s models Marisa and Berry Berenson.

Following her good friend Gaby Picabia, Elsa moves back to Paris in 1922 to provide Gogo with the best medical care. This is when she meets Paul Poiret THE fashion institution of the time, the Belle Epoque couturier, the king of fashion as everybody considered him.
Paul Poiret recognizes Elsa's wit and sense for art and, since she can't afford his expensive dresses, he gives her many.
Elsa never forgot Poiret's kindness and when he finally declined, she was one of the few who visited him always wearing one of his dresses as a sign of respect for his art, friendship and mentorship.

In fact, meeting Paul Poiret does mark Elsa's life and career in fashion: like him, she uses bright colors, many embroideries, decorations, although her first creations are swimsuits and sportswear, because 1920s were the years when women started practicing sport.
Elsa is one of the first designers to create a sleeveless swimsuit but her first distinctive mark is the use of trompe l'oeil and her very first big success comes in knitwear in 1927. 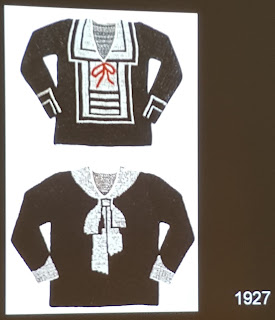 She had seen a special double layer stitch worn by Armenian refugee women and, as she always wore her own clothes, she has a sweater made for herself. An American buyer sees her and asks her to buy 40 pieces of her own sweater with the trompe l'oeil effect of a ribbon around the neck. He actually even asks for a matching skirt to sell the suit in a department store.
This is how she starts her fashion business by renting a hotel room where a group of Armenian women works to produce 40 suits in 2 weeks.

In 1928 she makes her first collection that includes sportswear, swimsuits, ski wear; in 1930 she starts doing regular dresses and evening gowns, often with a jacket. Jackets are Schiap's staple garment as she uses it a bit like an armor so that the woman can easily move through society without getting hit on her shoulders.

Schiap's fashion concept is very unusual for the time, in fact, she takes women's fashion one step beyond Chanel and Vionnet, who had respectively set women free from the fashion constrictions and had found ways to work the fabrics to enhance the woman's body: Schiap though wants her dresses to reflect women's souls. Both shapes and decorations are functional to face the daylight battles for the equality and highly seductive in the night.

Once Coco Chanel referred to her as the "Italian artist who made dresses" because since 1935, Schiap devotes herself to art: she is friends with  Dalí, Cocteau, Giacometti. Irony is the most important word in her fashion style; accessories, especially hats are vital because they allow her unlimited freedom of action and creation. 1935 also marks the opening of the Schiap Shop, her first atelier in Place Vendôme. Very close to Chanel's but also so much ahead of her times, Schiap realizes the importance of having windows to welcome customers and selling accessories that can be given as presents and can fit any size.

She also experiments with new materials like bark, acrylics, cellophane, even rhodophane, a glass-like material that she uses to make her glass cape. She is the first one to request fabrics with newspaper prints and following a trip to Russia, she incorporates fur in her models.
Many fashion designers got inspired by Elsa's innovations and many more imitated her, yet her sense of art is still unprecedented. In 1936, as France is politically moving left, she makes the shoe hat on a Dalí's drawing, to remind of the French revolution Phrygian cap.
Buttons become real artworks and in 1937, she launches her perfume "Shocking" in a bottle shaped after Mae West super feminine body, that we now all know as Jean-Paul Gaultier's because he copied it from her.

Dalí's inspired lobster dress is publicly worn even by Wallis Simpson.
In 1938 she makes the skeleton dress, with trapunto quiltings to mark the bones. This is part of her first thematic collection about the circus world.
Fuchsia is also from 1938, an intense color coming from China and Peru, that had never been adopted in European fashion because too clashing. 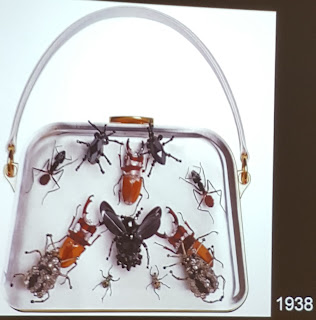 Schiap is also the first fashion designer to conceive the fashion show as a real engaging show. All the themes that she uses into her own collections are the topics she had studied in her younger years, yet from her unusual point of view. This is how she includes constellations and bugs in her clothes: stars were an homage to her astronomer uncle and the insect world is a symbol of hidden nature, the core of life.
She is the first designer also to use zips in her evening gowns. Schiap saw zips as constrast color decorations. In 1939 she makes a collection inspired to 19th century fashion and then to music.
In 1940 came the "cash and carry" collection with coats and dresses with huge pockets so that women could leave their purses home and just fill their pockets.


In truth, the period running from 1900 to WWII is the best time for fashion as art dominates and market rules haven't born yet.

During WW II she leaves France for the USA where she tries to raise funds  to support Paris, her atelier is managed by her most trusted collaborators. Finally in 1944 she comes back but the world has changed, there is little fabric, the new fashion show are sort of exhibits where the new models are shown on small mannequins, in miniature. The vision of life has changed and Schiap's approach to life and fashion has changed too, she is much more minimal and when Chanel comes back in 1954, Elsa closes her atelier for good.
For a short time, Schiap makes some accessories and then she retires to Tunisia and fully devotes to her grandchildren.

She dies in 1973 and only in 2007 Mr Della Valle buys her trademark. Every year, he hires a different creative director to revive the Schiap mark but of all the designers, only Bertrand Guyon tries to follow Elsa's footprints, however, this is a virtually impossible task because Elsa's wit was so quick and rich of ideas that nobody can really complete what she started.

To remember Schiap's work and innovations, Adriana Delfino did Ma Petite Robe Noire, a collection to homage her in 2010.