If you've been wondering about Turin, where it is located and what to see, the following post will give you an idea ;) 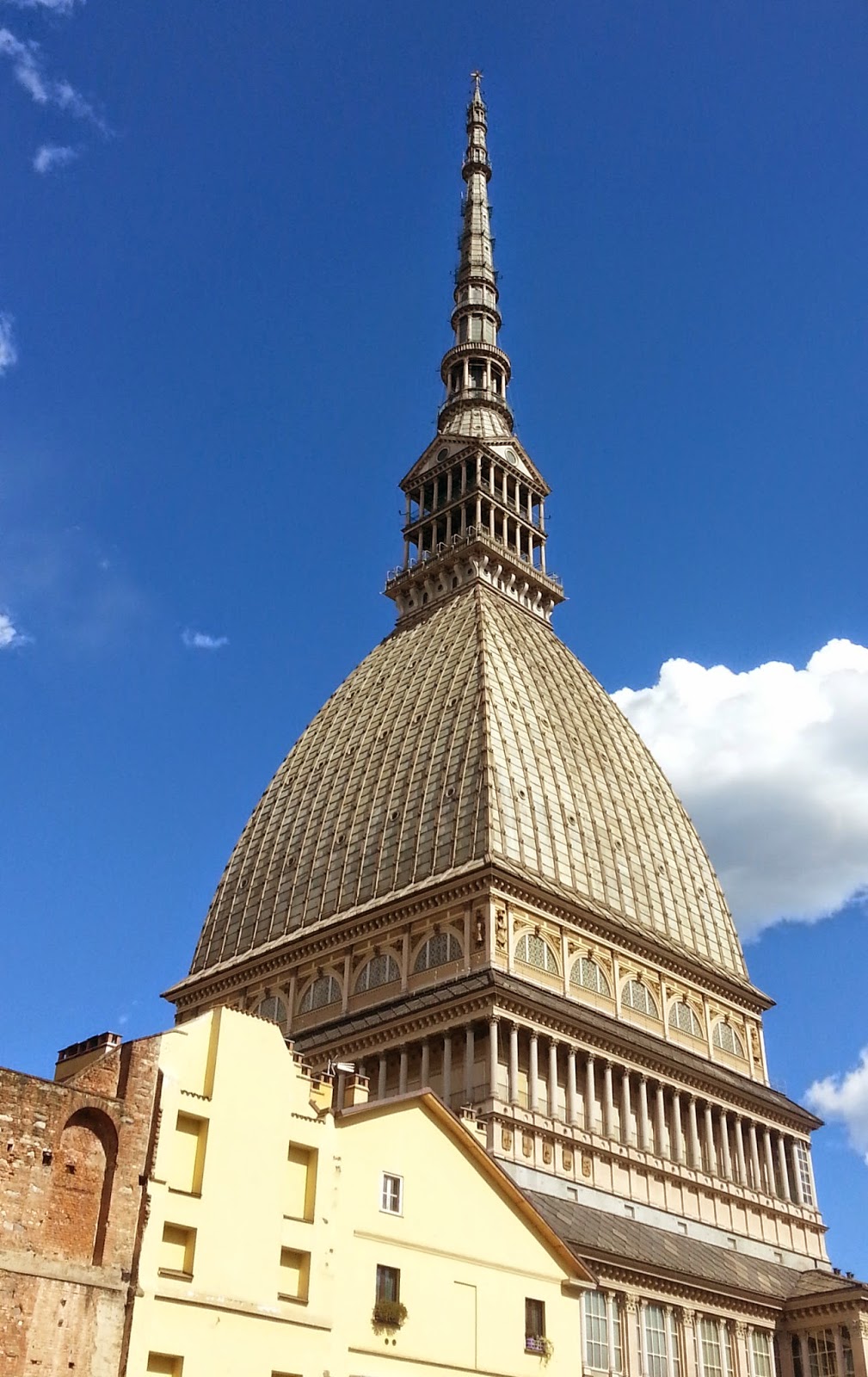 Turin, the regional capital of Piedmont, was the first Italian capital in 1861, and many Italian national symbols were born here. Italian cinema, for example, is one of them which explains why the Mole Antonelliana, Turin’s landmark building hosts the national cinema museum.
In Italian, mole means a mound, a large amount; antonelliana comes from Alessandro Antonelli, the architect that designed the building, now the tallest in Europe. This is also the city symbol and it was originally supposed to be a synagogue but due its high costs and how the project developed, the Jewish community renounced to it and chose another area of Turin where to have their synagogue built. This is how the city took over the direction of the works and the Mole Antonelliana was finally dedicated to King Victor Emanuel II and completed in 1889.
Up to 1953, there was the statue of an angel on the top of the Mole pinnacle, but it fell during a violent storm and got replaced by a star. You can still see Turin’s guardian angel when you visit this great interactive museum.
Just imagine the view from the top!

Chocolate definitely makes of Turin a real chocolate heaven. The whole region of Piedmont has been highly renowned for the past 4 centuries for its chocolate making techniques and many famous industrial products, such as Nutella, are today part of the daily routine of millions of people worldwide. Turin even has its own traditional chocolate: the gianduiotto. Gianduiotti are typically wrapped in gold foil and keep the shape of the chocolate dollops as they get gently laid on the pastry sheet by the master chocolate maker.
Thus the Gobino’s chocolate factory should definitely be on your to see list as you’ll go through the history of this family of chocolate makers and will also enjoy some samples of their products. All chocoholics should mark down CioccolaTO - Turin scrumptious Chocolate Festival, it takes place every year in a different piazza in Turin. As soon as the dates are public, we'll notify you, so stay tuned;)

Another foodie place par excellence is the largest open market in Europe: the Mercato di Porta Palazzo, also known as Turin’s kitchen because the whole city shops here on a daily basis. Get your cameras ready and keep in mind that every month you will see different products according to what's in season! Once you are done at the market, take advantage of this area, wandering through the lanes bordering Porta Palazzo square, leading to the pedestrian Via Garibaldi and the San Lorenzo Cathedral, where the Holy Shroud is stored and it will be exhibited in 2015, so you will be able to see it!

You are now in the ancient Roman neighborhood: il quadrilatero romano – literally the Roman rectangle. You’ll love strolling down from the Roman Porte Palatine, marking the entrance to the Roman military settlement that became Turin over the centuries. Eating at one of the many trendy restaurants you will get the chance to try the regional specialties. Finally, you won’t resist and peek at the indie designers’ shops based in this very creative neighborhood.


After walking through Via Garibaldi, a 1km long open air shopping mall, built on the ancient Roman decumanus maximus, one of the two main streets of the Roman settlement, you’ll end up in Piazza Castello. A quick hop will lead you to Piazza Carignano, a tiny elegant square, one of Turin’s living-rooms, where there is Palazzo Carignano, the very first Italian Parliament. Palazzo Carignano is the perfect example of Piedmontese Baroque with its ribbon-like moving façade and the balcony from which the King used to wave at the people.


Beside Palazzo Carignano, you’ll find the Egyptian Museum with the largest collection of Egyptian artifacts in the whole world now that the Cairo one has sadly lost most of its collection, after the Arab Spring sack. This museum will simply amaze you for its well-preserved collection: the statuary will leave you breathless as the light is set up so spectacularly that the statues almost look like they are alive. There’s also a whole unrolled book of the dead, three royal mummies and the reconstruction of the tombs of a royal architect and his wife, displaying all their grave goods, including the foods and the make-up products.
Doubtless, the most romantic place in Turin is the Valentino Park, on the river Po, where you can visit a fake local medieval village, the botanic garden and the Valentino castle where there is the school of architecture.
Speaking of castles, one of the most amazing residences is the Royal Palace in Venaria, in the Turin’s suburb. This 17th century UNESCO palace will remind you of Versailles thanks to its extended gardens and checked marble floors. If you happen to be here in the summer remember about the royal buffets you can take part to.


Besides the castles, another sign of the aristocratic heritage of this region is in the local food culture and its need for high quality ingredients. This doesn't come to a surprise if we consider that the House of Savoy, the Italian royal dynasty ruled this area for over 10 centuries and that the Slow Food movement, aka the seed of the world organic food frenzy, was born in Piedmont and that the Eataly chain chose Turin for its very first store just a few subway stops from the city center.

Ultimately, you'll always remember Turin for its elegance and pragmatism: getting lost in its friendly downtown, developed on a grid like Manhattan, is virtually impossible; and, its thoughtful 10.5miles/17km of porticoes will provide you with a pleasant shade from the hot sunny days and a shelter from the rain and snow in your cold days of shopping!