The Santissima Trinità church in Turin is located in central Via Garibaldi, at the corner with Via XX Settembre, towards Piazza Castello.

As it is customary in Turin, our preciously decorated baroque churches are rather simple when seen outside and you never imagine wealth of decorations you will see once inside.

To understand the context of this church we have to imagine that since the XII century, on its right there had been another smaller church: St. Agnes and that between 1545 and 1563 the council of Trent contributed to the birth of religious associations and secular brotherhoods with charity purposes.

The Brotherhood of Holy Trinity was one of these groups founded in 1557 to take care of pilgrims, the people recovering from diseases and charity works. They commissioned a church that was finally built between 1598 and 1606 by architect Ascanio Vitozzi, a member of the brotherhood, who is also buried there. 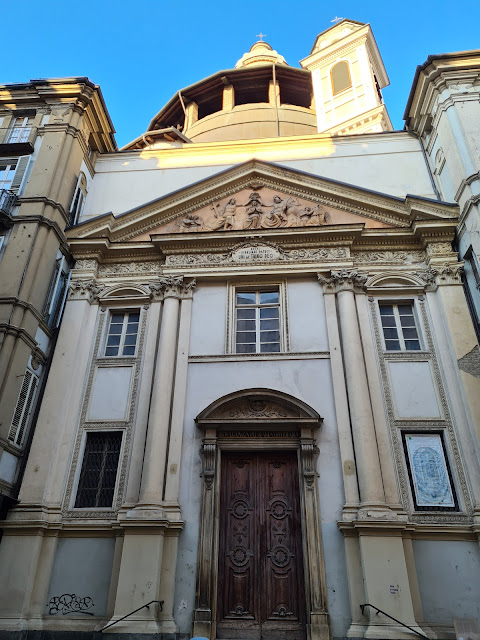 This is a small interesting church that keeps the trinity symbolism in its triple structure, there are in fact: 3 entrances, 3 altars, 3 choirs and 3 domes - one on top of the other for a total of 47m /157ft/51yd high.

To build it, the St Agnes church had to be destroyed but in the 18th century, following the projects by famous Savoy royal architect Filippo Juvarra some additions were incorporated: the polychrome marbles and the right altar dedicated to St Stephens and St Agnes in memory of that historical church that once was there.

The sacristy was designed by one of Juvarra's students and you can still admire the fresco about the sacrifice of Melchisedech.

The current façade was added in 1831, in neoclassical style. The crowning of the Holy Mary is portrayed In the tympanum or frontal triangular gable above the main door.

The triple dome was also renovated and painted around 1845. Unfortunately, the WW2 destroyed the wood statues, the 1700 altar piece and the apsis. 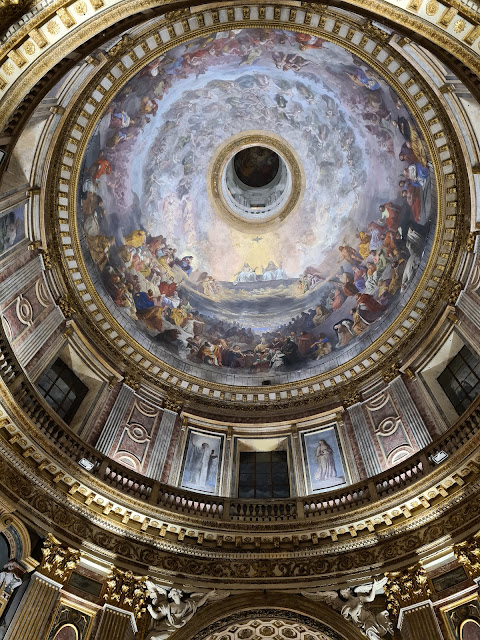 the main altar is from the early 1700s and it's made of a big tabernacle frame with a resurrected Christ. Following the trends established by Council of Trent, above the altar there is a crucifix topped by a marble ciborium (a structure that looks like a canopy bed) with columns in pink marble. (Before the Council of Trent the ciborium was placed on a wall in the presbyterium).

The left altar was added in 1635 and above it there is a wooden icon of St Maria del Popolo enclosed by some gilded angels.

The right altar was made between 1717 and 1734 by Filippo Juvarra. Above it, there is a 1780 altar piece portraying St Agnes, St Stephens and St Philip Neri to commemorate the churches that once were located on this site and the foundation of the Roman Brotherhood by St Philip Neri.

The gem of this church though is the sacristy! 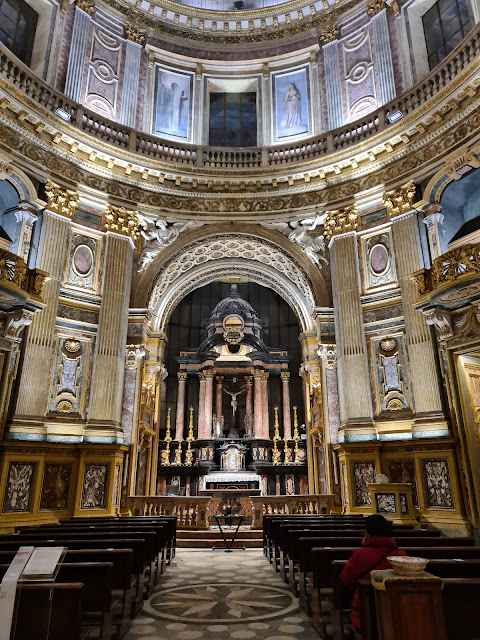 The outer part of the dome has never been completed but its inner side has different frescoes: The Glory of the Holy Trinity in Heaven, with choirs of angels singing the divine glory. In the middle there is the Holy Trinity with the Father, Jesus and the dove of the Holy Spirit. There is also a choir of singing and playing angels to represent the harmony of the Celestial Spheres, here included for their geometrical and  musical aspects. In the outer lower row, you can see the Roman Catholic church saints and blessed people separated from the Holy Trinity by a choir of Seraphim, one of Cherubim and one of Thrones, or the angels that sit on the throne of justice to practice the Divine law. They are the purest of all beings, above any possible temptation.

If you are curious about all the different angel categories in Christianity, please, click here 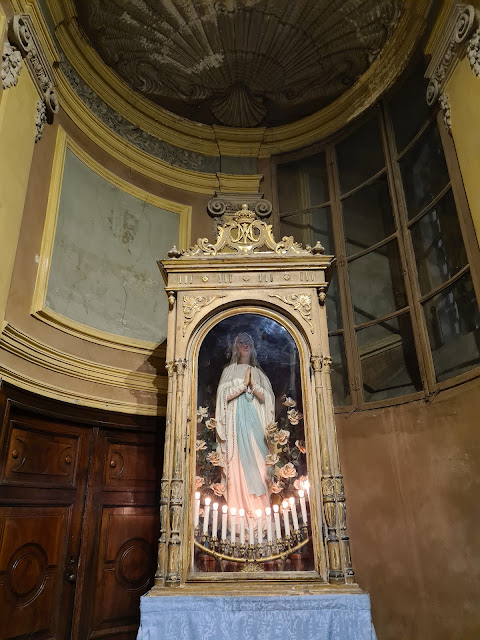 Now you know it, when in Turin, peek inside all the open churches you see when strolling around: you never know the beauty you can admire. Whatever your faith is, you'll always be welcome to admire these art and architecture masterpieces and ... if you need some extra support, don't forget to light up a candle after leaving a small offer in the box.

If you are particularly interested in art, architecture and churches, you can request a more specific tour of Turin, just e-mail Lucia: turinepi@gmail.com