The third round table was hosted by Jyothi Aimino (far left), shoe and accessory designer Manuela Gomez (first on the left), British author Mari Biella (second to the left) and food and food historial blogger Rosemarie Scavo (second from the left). The interpreters were (right to left): Carlotta Rinaudo, Dalila Brancone and Chiara Cumino.

Jyothi Aimino allowed each guest a few minutes to introduce themselves, before proceeding with the round table. Despite their apparent differences all the guests shared many points about food and food experiences.

Colombian by birth but Turinese by adoption, Manuela Gomez was the first guest to share her culinary perspective both as a resident of Turin who lives right by the largest open air market in Europe and as a Colombian, carrying all the perfumes of her native country in her heart. 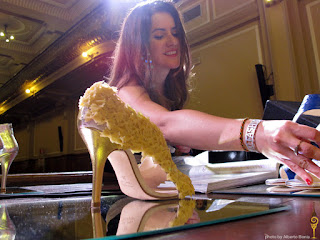 In fact her first food memories are about the freshness of the Colombian fruit and meat, the traditional flavors of the Colombian cuisine and the sun. Manuela insisted on the authenticity of those flavors as a result of healthy breeding and growing techniques; she pointed out how the light of the sun and the free-range conditions can really impact on the quality of our food and consequently of our health. Living next to the market, she now buys her food on a daily basis, getting as much as she can right from the farmers' section at the Porta Palazzo market.
To underline how food has always been a vital part of her life, last year she made some pasta covered shoes for the ExpoMilan. 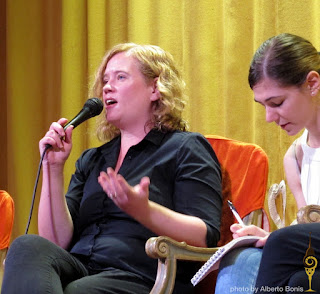 Originally from the UK, ghost novel writer Mari Biella said that most definitely food is a part of us and our souls, something we give and share to our family and friends. Growing up in the UK, she always took food for granted, therefore it never really had a special place in her life - she ate what she was given, without much thought. Later though this has changed and moving over to Italy also had a big impact.
Although she writes ghost novels and food isn't her first topic, in one of her novels there is an Italian character who is always cooking and bragging about Italian food like only Italians can do.
The making of the food thus is also very important to Mari because food is the thing itself, the people we eat with and the process of cooking too. 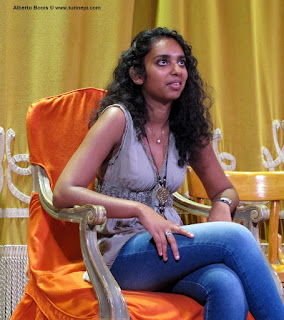 Jyothi Aimino, a senior at the Gastronomic Sciences University - the Slow Food university, pointed out that people should also reflect about how food is still a luxury in many countries of the world.
Since she can remember she has always been a foodie and cooking itself has always been a synonym of family. Studying away from home made her realize how the traditional food and wine culture of Canvese, the district in Piedmont where she grew up can easily turn the lead the economy of the whole area.
As a young interactive woman, Social Media play a pivotal role in Jyothi's life and she believes that producers and consumers can easily bridge their gap online. At least this is her personal plan. 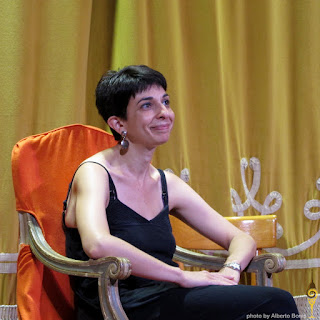 Aussie food blogger and food historian Rosemarie Scavo, author of the blog Turin Mamma said that growing up in an Italian family food has always been a way to preserve the family identity. When eating out, Rosemarie's family would prefer Indian cuisine because Italian food was their every day food. Her passion for food blossomed when she moved to Europe after graduating from the university; particularly, shopping at the market really gave her a sense of what was behind food.

She became a blogger during her maternity leave to document her recipes, her food researches and her expriments. To Rosemarie food is a high creative channel but it also means conviviality, both in the eating and in the preparation phase.


After the round table the Turin Epicurean Capital team and guests shared a relaxing lunch naturally followed by a glorious gelato. the afternoon hours were spent exploring Turin or relaxing before the goodbye dinner and the fireworks.


The Turin Epicurean Capital 2016 good-bye dinner was in a piola or a traditional tiny Piedmontese osteria where only regional products and wines are served. The owner is a sommelier and personally gets in touch with small producers from all over Piedmont to offer his customers always the best of the regional wine productions.
The menu changes daily according to the market availability; cheeses, cured meats and specialties are always 100% traditional from different areas of Piedmont.

After the dinner, it was finally time for the Saint John's fireworks on the Po River. Over 100,000 people gathered on the river bank and in Piazza Vittorio at 10pm to enjoy the show. 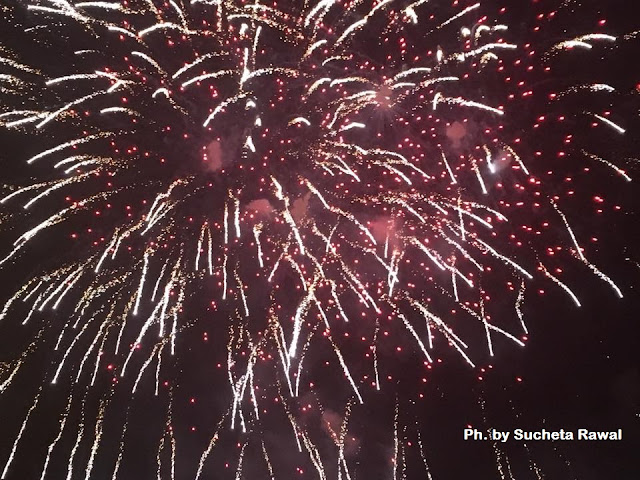