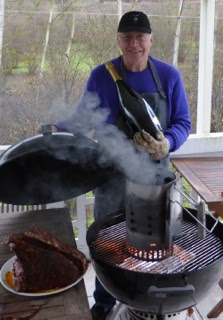 This week guest post is by Darryl Baldwin who was a guest at Turin Epicurean Capital 2014.

After working in the City of London for 40 years trading, selling and marketing the whole gamut of financial instruments for various international banks, he and his wife stumbled across a piece of Paradise. It was February 2007 and he had decided the time was right for a bit of permanent R&R. Within a few months they had bought a house in Neive and properly discovered Nebbiolo. They built a grandchildren attractor (swimming pool) and within 2 years, when it was a proven success, decided to sell the house in the UK, help the kids and settle permanently in Italy. They have never looked back and are in love with the wine, the food, the culture and the family-centric approach to life. Slowly but surely they  are educating their English friends that they live in Piemonte where the best wines in Italy (if not the world) are made and not in Tuscany which is the only region they appear to know. You can follow Darryl on his blog Piemonte mio

Italy and France vie with each other as the largest producers of wine in the world, followed by Spain and the USA.
Italy has 25,000+ wineries in 20 different regions producing 6.2 billion bottles of wine from 1.9 million acres. 25% of this wine is catalogued as fine wine with D.O.C. and D.O.C.G. designations.
There are more than 800 distinct grape varieties grown in Italy of which 400 are catalogued and authorised for use. Almost 60 are permitted in the region.

Italian wines are classified into one of 4 categories:

VdT (Vino da Tavola) = At this most basic level, regulations stipulate simply that the fruit must be of Italian origin. Piedmont doesn't have any of these!!

DOC (Denominazione di Origine Controllata) = indicates zones and regulations that are much more specific than the IGT designation.

DOCG (Denominazione di Origine Controllata e Garantita) (DOCG) = wines must be made under even stricter standards and legal requirements as well as pass a blind test evaluation by a tasting committee before they can be sold as DOCG wine
Piemonte has more classifications than any other region although ranking only 7th in overall production. There are 55+ DOC’s and 16 DOCGs and 63% of Piemonte’s production falls within these categories

The King and Queen of wines 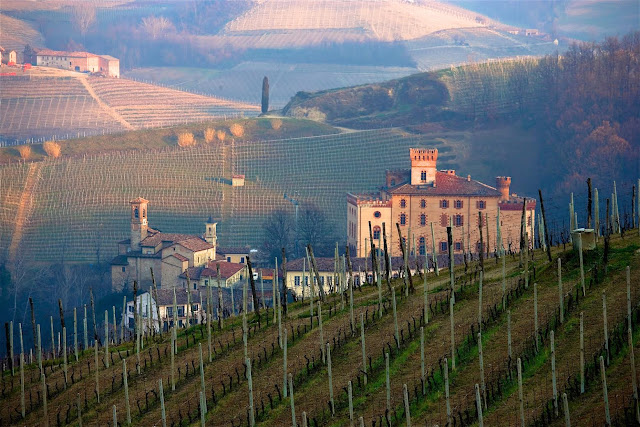 Of all the wines that Italy produces, Barolo and Barbaresco are at the pinnacle and at their best rival any red wine in the world for their structure, complexity and ageing potential. They are rich, deeply concentrated full-bodied wines with pronounced tannins and acidity. They are almost always lightly coloured varying from ruby to garnet when young to more brick and orange hues as they age. They evoke a multitude of flavours and aromas: dried and fresh fruit and berries, violets, vanilla, cinnamon, green pepper, and other spices, tar, liquorice, being the most used descriptions.
Both are made from 100% Nebbiolo grapes, (after the Italian for fog), a late-ripening, thin skinned, tannic grape that shows its best when grown in the limestone and gypsum rich, marl soils of the Langhe and Roero hills.

The zone from which Barolo can be made comprises 11 villages: to the west Barolo, Diano d’Alba, Grinzane Cavour, Novello, Cherasco, La Morra, Roddi and Verduno where more fertile soils produce wines that tend to be softer and slightly more delicate.
To the east are Monforte d’Alba, Castiglione Falletto and Serralunga d’Alba, where the poorer soils tend to produce fuller, more muscular wines.
It is difficult to generalise about Barolo as there are more than 900 producers authorised to add the name Barolo to their wine. Add to that the variance between vintages and you have a lifetime’s pleasure.

Strict regulations include:
Maximum yield per hectare: 8 tonnes of grapes (around 7,000 bottles)
Ageing: 3 years starting the 1st January of the year following the harvest/vintage.
2 years of which must be in wood (oak casks)
Minimum alcohol: 13 % vol 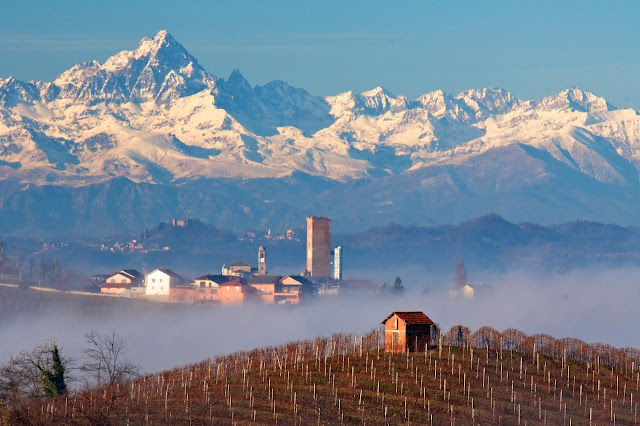 Around 200 producers can make Barbaresco and similar to Barolo it can only be made within a designated zone that encompasses 4 villages: Barbaresco (fruitier?), Neive (more elegant?), Treiso and San Rocco seno d’Elvio (earthier and stronger tannins?).
The Barbaresco zone has a slight maritime influence that means it is slightly warmer than Barolo, and thus harvests earlier. Earlier fermentation and a shorter maceration period mean that young Barbarescos have softer tannins than their Barolo counterparts. As a result they are allowed to age a year less (2 years) with a minimum of only 9 months in wood and minimum alcohol of 12.5 % vol.