We start the new year with Michelangelo Mammoliti aka the herbalist chef we met in August in the Roero wine district, a Unesco World Heritage site. Back in the summer, when we visited Osteria La Madernassa in Guarene, we got to know how he works, his cooking philosophy, about his French training and his love for local herbs and flowers, but over the Holidays we finally got the chance to savor his cuisine. And ho boy, what an experience! Our senses went on a trip we can hardly find the right words to describe because Michelangelo has the rare gift to give his food many dimensions, making of his menus a culinary composition, rather than a mere meal.

We arrived at Osteria La Madernassa with some expectations because we already knew him, had already tried his herb infused olive oils and had visited his herb garden around the osteria, however, even knowing him and seeing him at work, we couldn't simply imagine how his dishes could be shaped, how his flavors could be balanced or layered and how meaningful both the names and the display of his food could be.
Like any shy guests visiting a  high level restaurant in one of the world culinary lands, we picked a table in the sunlight and prepared to take gorgeous pictures; in fact, we knew Michelengelo, like the famous Renaissance artist, takes watercolor classes and puts a painstaking precision in anything that concerns the restaurant, not just the food. Every detail counts from the table cloth fabric and the silverware design people will use to eat his masterpieces, to of course, his kingdom: the kitchen or la cucina in Italian!

Michelangelo had always mentioned we would try his cuisine, but he had never really specified anything; as a young and very down to earth chef, he doesn't really like the pompous formality of today's culinary scene as it's often portrayed by the media. In fact, he's very straight forward and practical, just like the herbs and flowers he cooks with, but at the same time, he has a refined sense of layering and sequencing textures, perfumes and naturally, flavors that give him an aura of seasoned chef who draws from the different cultural realities he has lived in.
This doesn't really come as a surprise given his international experience despite he's not even 30.
After a short visit to his glistening kitchen, we sat down and enjoyed what we all agreed to name: the Michelangelo Mammoliti's culinary symphony.

The overture were Christmas canapes and amuse bouche, magic French words that perfectly describe Michelangelo's royal finger food: an "oreo" like crunchy tuille - biscuit made with squid ink and tuna cream, a guinea fowl cromesquis, salt butter painted radish and a Parmesan cheese and hazelnut sable' with philosophy on top - where philosophy stands for a semi-liquid goat cheese. 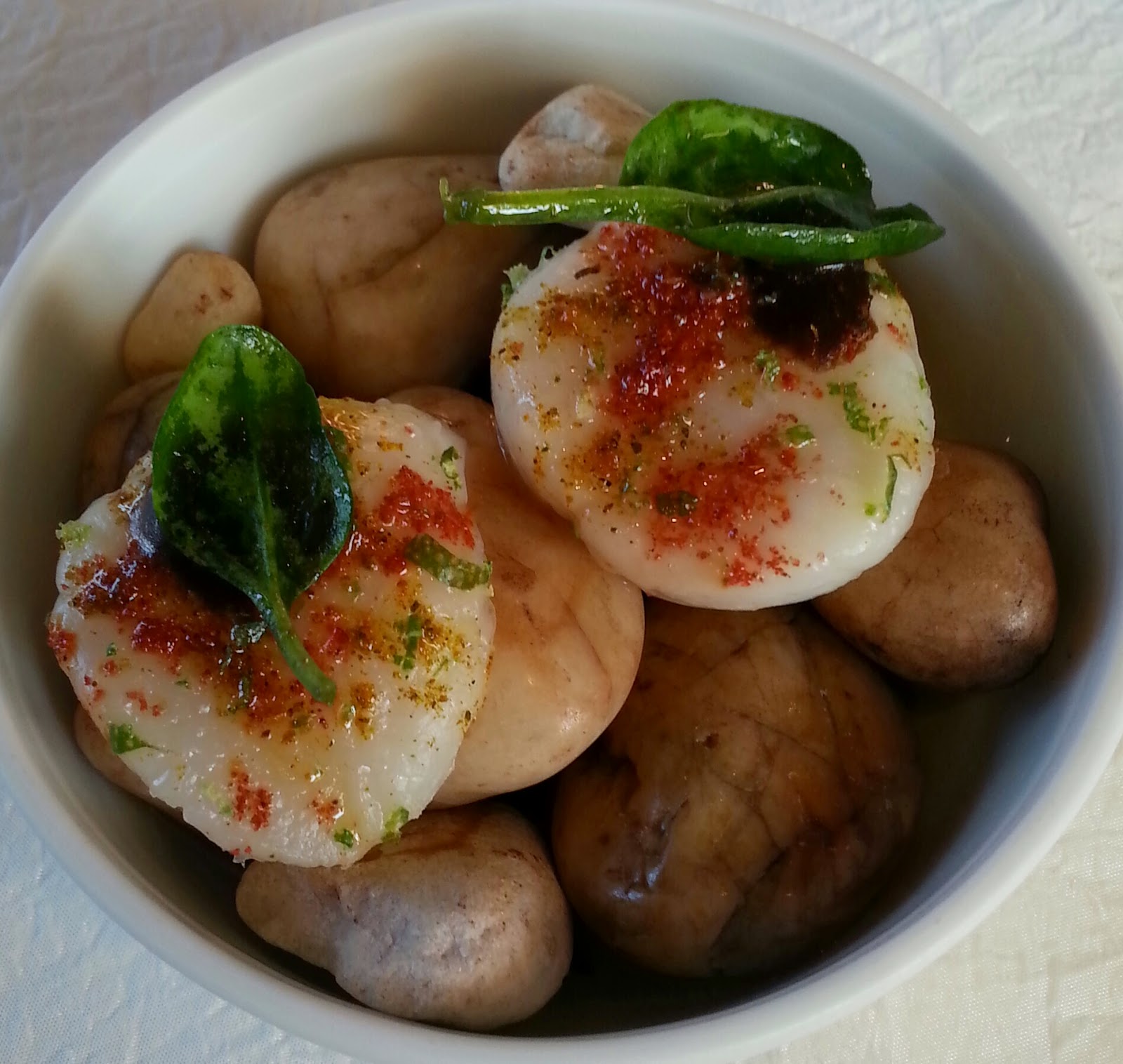 The first movement was a perla bianca or white pearl. By far, we'll all keep it in our hearts as one of the most memorable of Michelangelo's sonatas because it slowly unveiled its flavors to our palates as an oyster slowly opens itself before showing its pearl.
We were served a tiny covered marble bowl with some steaming hot sea stones on the bottom on which a couple of lightly cooked and seasoned scallops had been placed. Imported hot Welsh sea water (right from near where the Queen has her property) was poured on the scallops seasoned with tandoori spices and Timut pepper to complete their cooking process. And once ready and in our mouths the rhythm of the music kept changing, leaving us in a speechless sensorial bliss.

As customary, the entr'acte came and the homemade bread was served: three mini loaves made of enkir wheat flour, 5 whole grain and mini focaccia bread with olives found their place on our table. 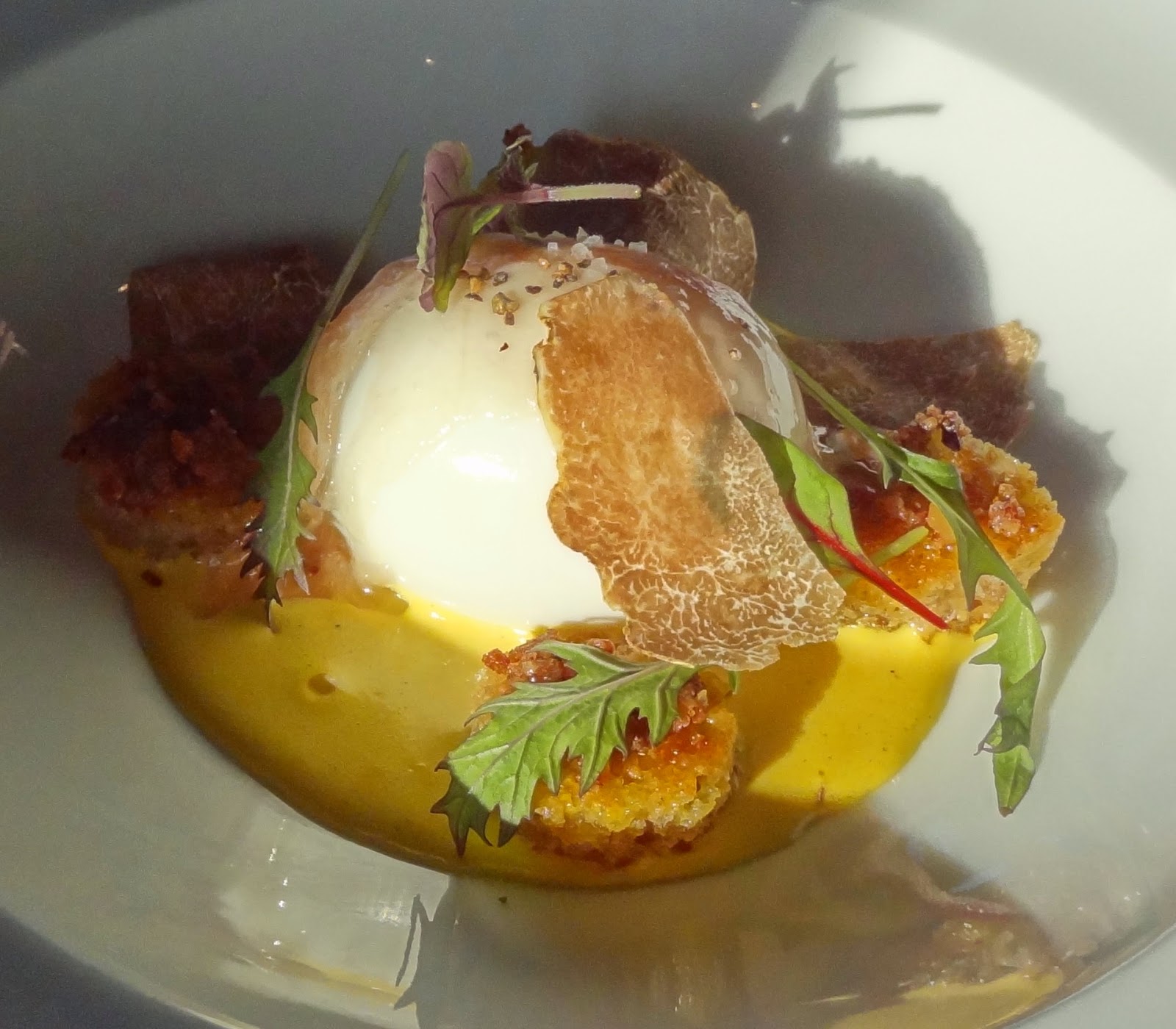 Then another of Michelangelo's memorable sonatas followed and coccode' or cluck-cluck landed before our eyes: an egg cooked at very low temperature with carbonara cream, crostini, crispy jowl bacon, transparent Iberian lard and shredded white truffles!
As the waiters refilled our glasses with water and Ghiomo Arneis, they winked at us and softly suggested we picked up a bit of everything to maximize our tasting experience: the crunchiness, the sweet creaminess, the aromatic and impalpable truffle that gave a special accent to the whole dish. 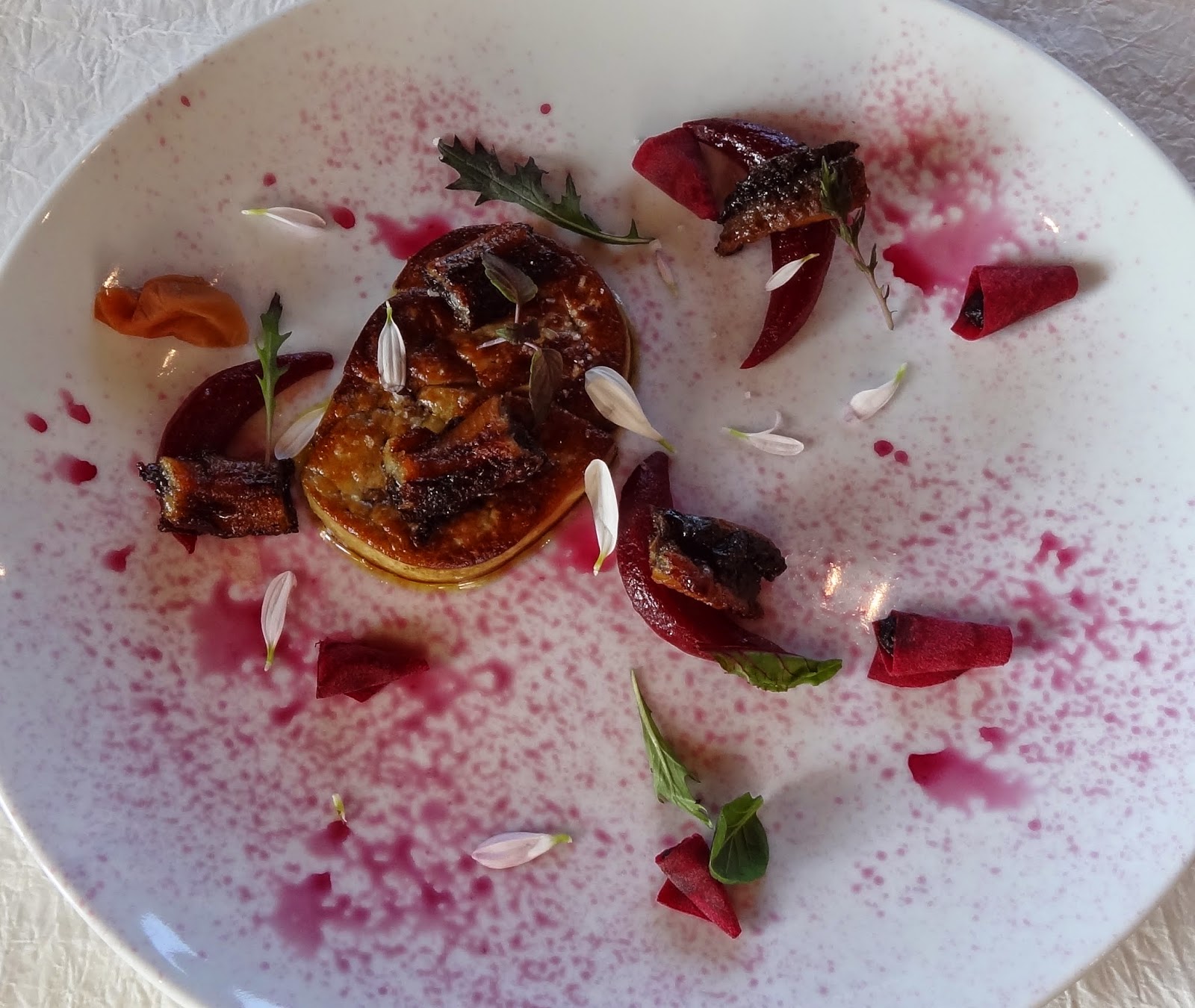 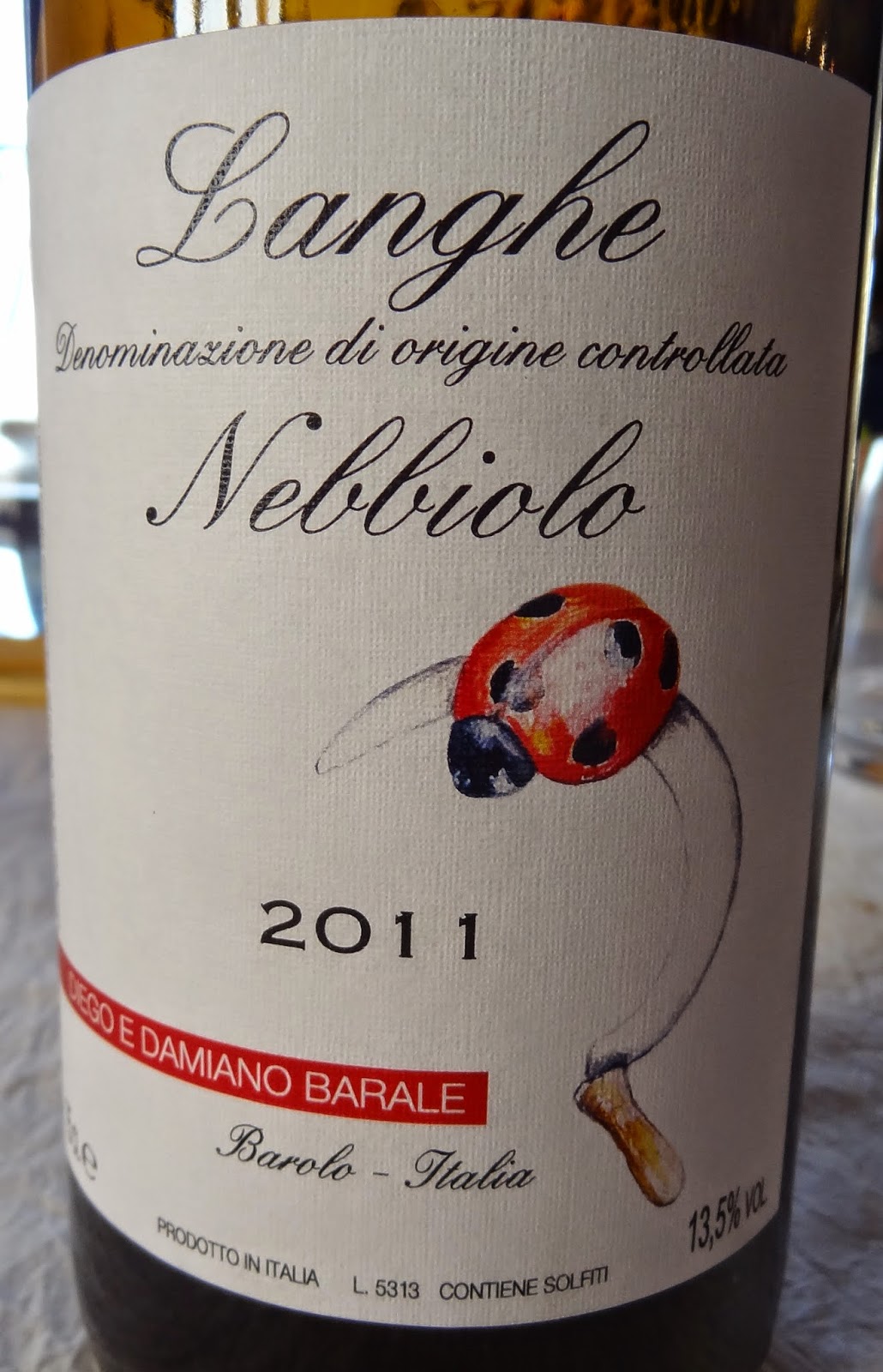 Then it was the turn of Beautiful Langhe like the Roero's worldly renowned wine district. The name and the arrangement of this dish are a homage to Romano Gritti, a famous local artist. This fast movement enhanced the  contrast of the acid, salty, crunchy and bitter qualities of food Michelangelo painted with a roasted liver escalope, a crunchy Sake marinated eel, red beet and sweet and sour petals of Umeboshi plum wrapping black garlic. Yes, you guessed right, Michelangelo has a real passion of Japanese cuisine.
As for us, we simply loved it and almost felt guilty to eat this painting! to give us some courage we sipped some 2011 Nebbiolo by Barale. 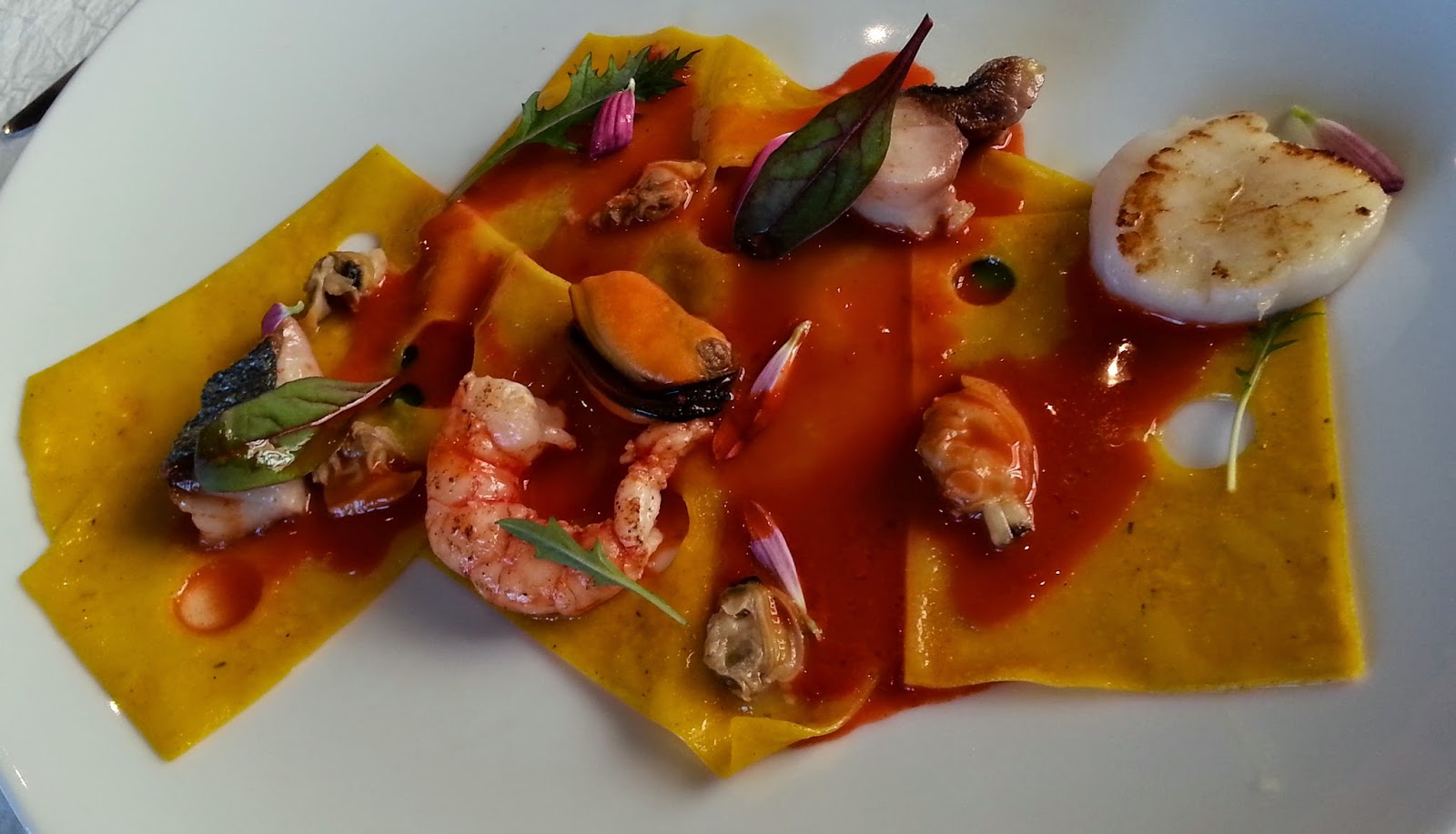 Emmental at the sea was the allegro movement, however, no cheese was involved. In fact, thin egg pasta sheets with cut out holes perfectly imitated the shape and the look of Emmental cheese slices, topped with a sea Bolognese sauce and a rich coulis of Mazzara del Vallo prawns. Simply wonderful to both our eyes and palates, the balance of the flavors was reflected by the colors of the single ingredients. Too bad we couldn't have a second, but our meal went on with a slow solemn movent: quail breast cooked chartreuse style or very slowly, starting at 85C/185F to 66C/151F for long hours, served with Cervere leeks, cromesquis quail leg on Jerusalem artichoke puree, served with quail juice and komatsuna, black cabbage and watercress. 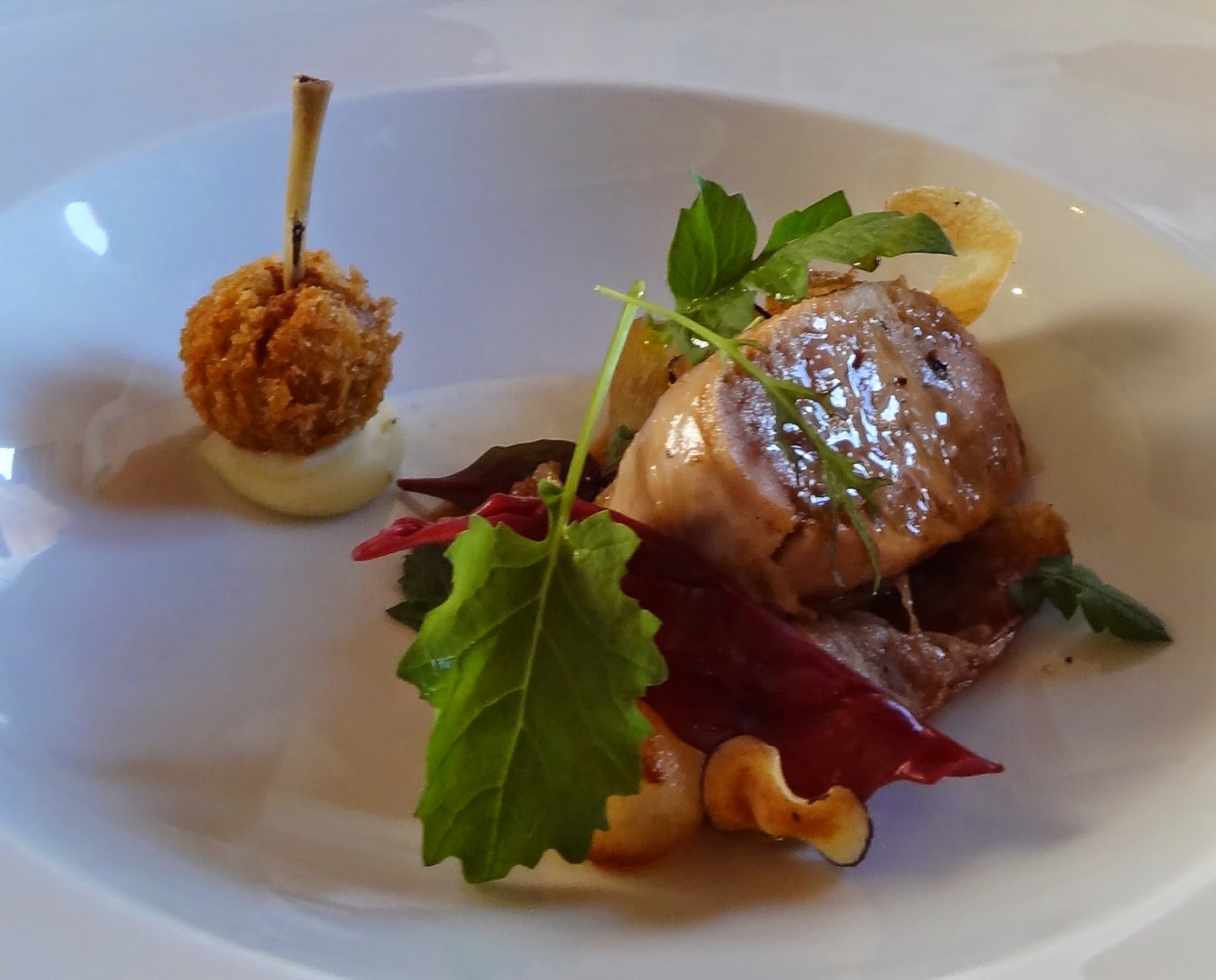 At the peek of our culinary delight, gin milla - an amazing chamomile slushy came to gently refresh our palates before diving into the dessert. This special slushy made of shaved chamomile infused ice was served with a superb gin jelly to literally thrill our senses.  Ho sooo good! 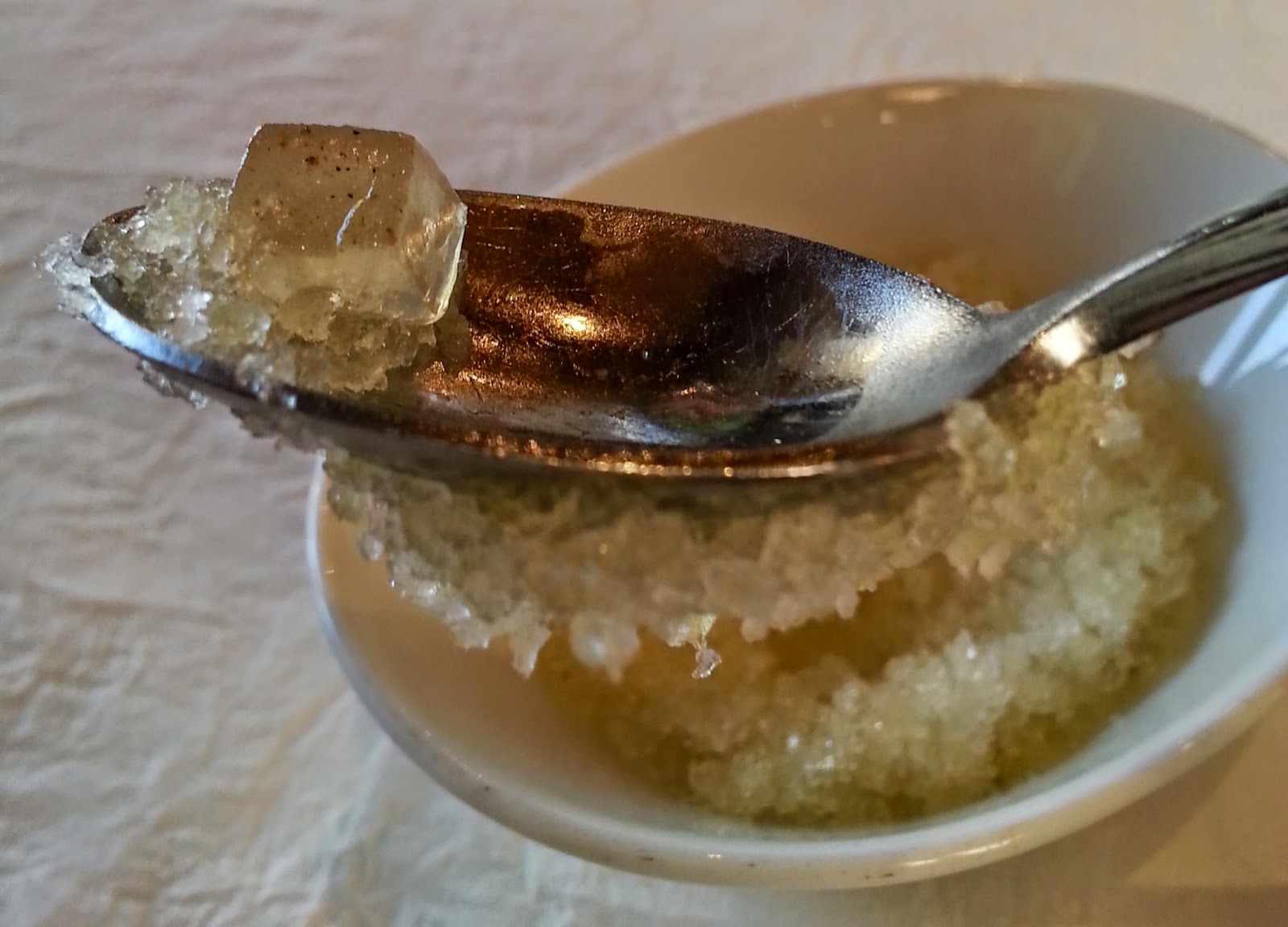 As we were four, Michelangelo prepared a different dessert for each one of us who ended up with our own personalized sweet masterpiece: hazelnut creamy made with round and gentle Piedmont hazelnuts, tiny hazelnut cookies and a hazelnut mousse to remind of the Piedmontese meadows; moka naturally with a leading coffee note made of crunchy dacquoise, sherry chantilly cream and a hazelnut  crumble; Mad pear to remind us of the local pear Madernassa, the symbol fruit of the Roero wine district, made with an almond dacquoise and saffron infused crunchy pears and a light lemon and cardamom cream; Ph3, because of its acidity, was actually a scrumptious mandarin jelly with an Abinao chocolate tuille,  sable' breton and lemongrass foam. Mamma mia, che bonta'! 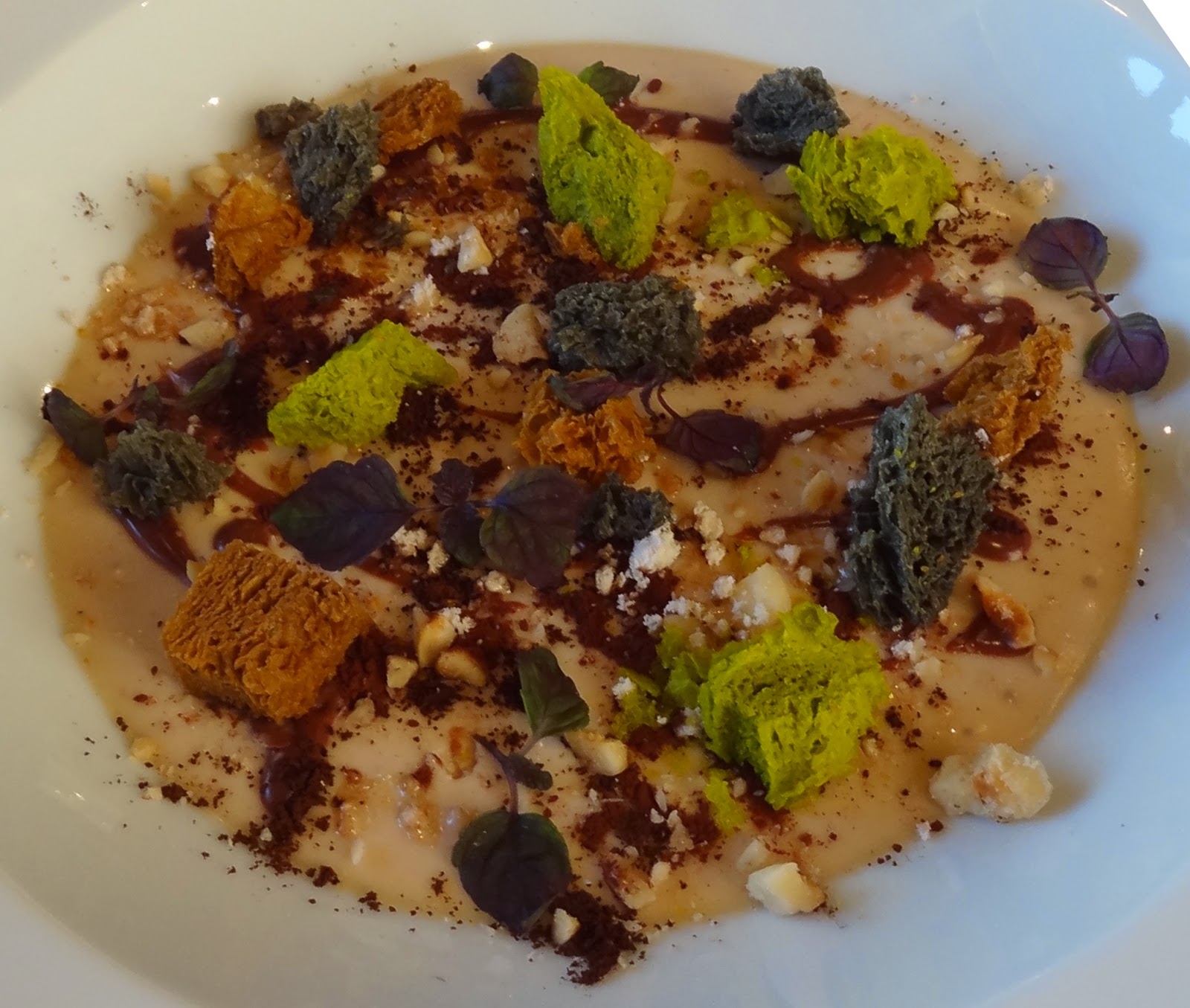 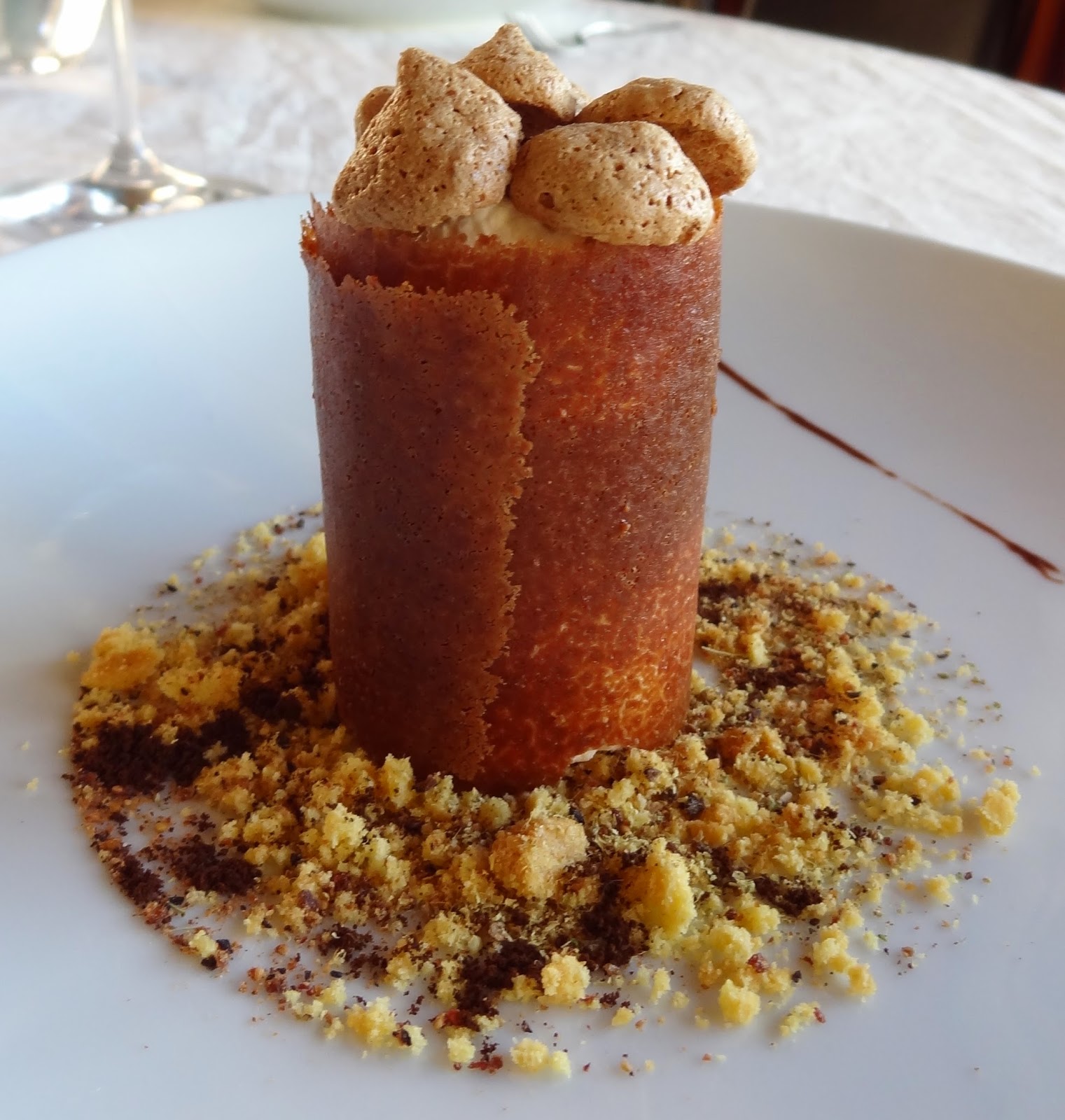 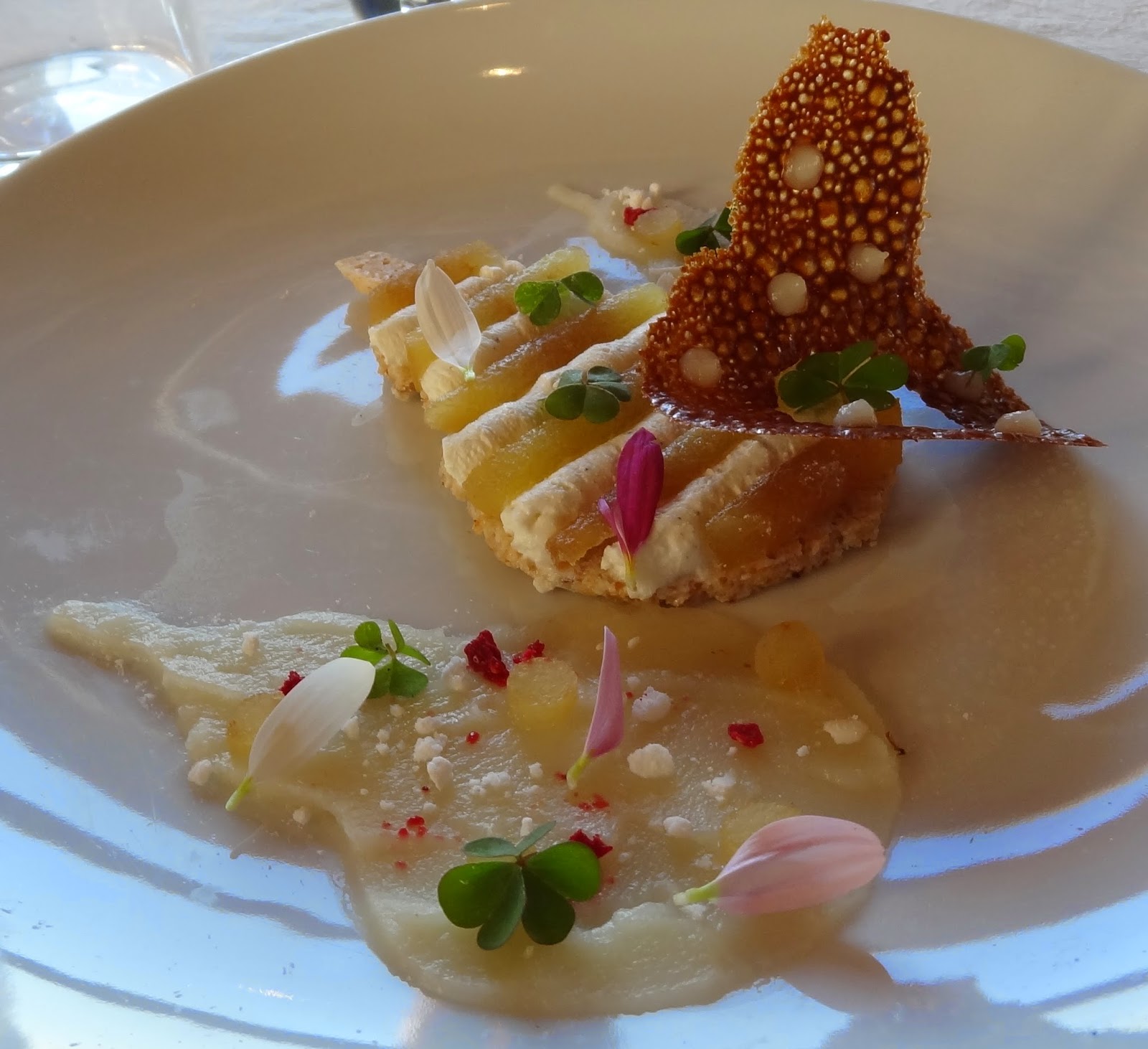 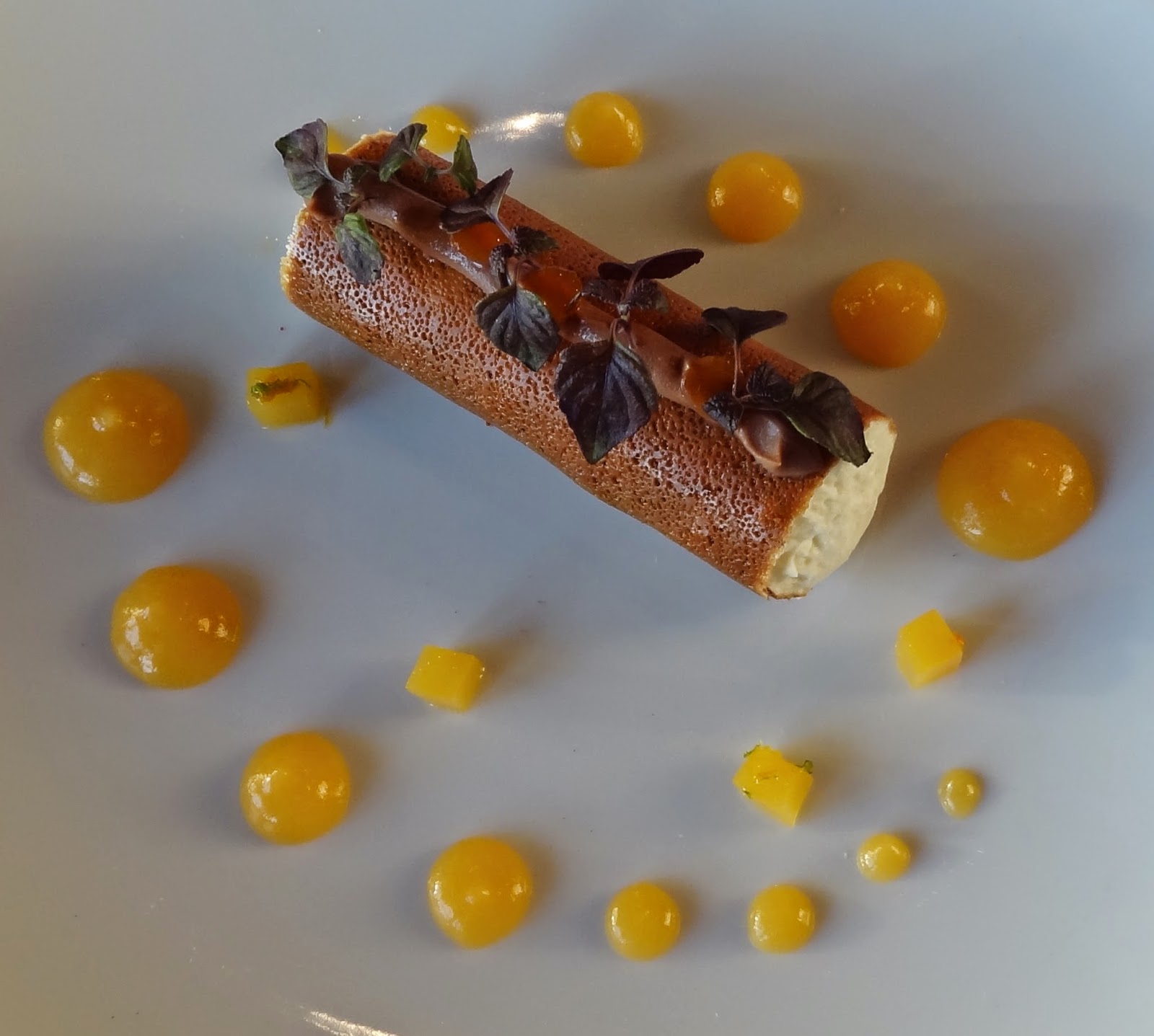 We could have died there and then but Michelangelo decided we should live; over three hours had gone by since we had first sat down at his table and our sensory adventure wasn't over yet! One last stop awaited us: the coffee! Naturally the coffee couldn't possibly come alone and it was served with an allegro sonatina (short sonata) of a marshmallow dusted with raspberry powder - honestly we all came back home dreaming of this 9th cloud delight - a chocolate ganache sphere (had dragon ball known about it, I'm sure he would have included among his 9 magic spheres!) and a pleasantly tangy mandarin jelly to reinvigorate us before the coffee took the center stage for its grand final.

Each one of us received a capped espresso cup of Lebanese coffee perfumed with cardamom with small tongs, a way to bring us to Beirut where Michelangelo worked in a restaurant and learned how to incorporate the local ingredients and culinary traditions into his own cuisine.
Then a big round plate covered in coffee beans and with a smoky glass bell was placed in front of us. After Michelangelo instructed us on how to best savor the hazelnut powder ravioli hanging under the glass bell, like a magician, he lifted it up, allowing the hazelnut vapor to invade our nostrils.
One after one, we all picked the hazelnut ravioli wrapped in edible thin jelly, holding it with our tiny tong, we dipped it into our uncovered cardamom coffee and let it melt down in our mouths. As the jelly and powder melted we sipped the strong and aromatic coffee and literally could touch the sky. 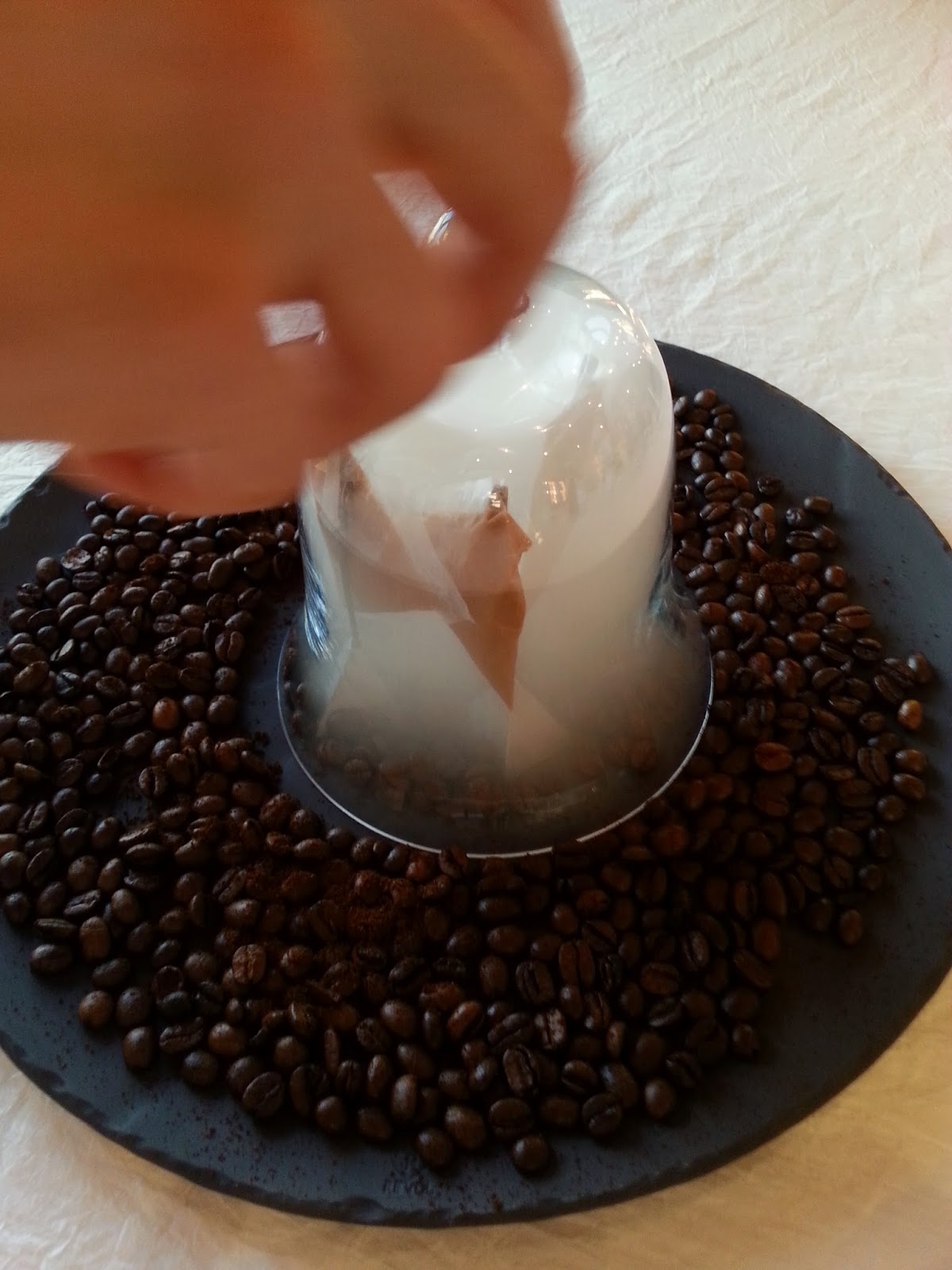 What a culinary experience! And what a wizard of a chef, a real orchestra director, Michelangelo Mammoliti is just so much more than a regular chef, he does know how to harmoniously design a menu involving all your senses to give you a unique full sensorial experience.
What are you waiting for? Look for him in Roero and make your reservation at Osteria La Madernassa to savor a corner of Italian heaven in Piedmont ;)